Scenic spots are closed, concerts are postponed... Epidemic prevention and control in many places have been upgraded again!

Chinanews client, Beijing, October 28th (Reporter Ren Siyu) In the past few days, there have been many local epidemics in China, epidemic risks and prevention and control pressure continue to increase, and epidemic prevention and control measures in various places have been upgraded again. At present, many domestic scenic spots are temporarily closed, cultural venues such as theaters and theater 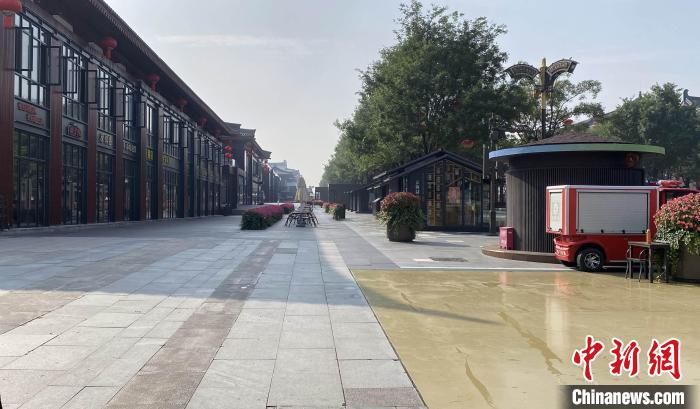 At present, many domestic scenic spots are temporarily closed, cultural venues such as theaters and theaters have restricted current flow, and many concerts and music festivals have once again been postponed.

Many scenic spots are closed

In order to effectively control and reduce the risk of the spread of the new crown epidemic, the General Office of the Ministry of Culture and Tourism recently issued an emergency notice requesting that the prevention and control of the epidemic in the culture and tourism industry be carried out strictly.

The notice emphasized that the requirements for epidemic prevention and control in cultural and entertainment venues should be strictly implemented.

Data map: In the past few days, Lanzhou West Railway Station has carried out "carpet-style" killings to ensure the safety of passengers.

In the face of this round of the epidemic, all localities responded quickly and issued the latest epidemic prevention and control notice.

For example, Beijing will strictly implement prevention and control measures in public places, opening up parks, theaters, museums and other indoor and outdoor cultural and entertainment venues, and community chess and card rooms, mahjong halls, etc., with a 75% current limit.

This round of the epidemic is mostly related to tour groups or self-driving tours. Recently, many places have announced the suspension of the opening of scenic spots and the suspension of travel agencies to organize cross-provincial group tours, including Xi'an Dayan Pagoda Scenic Area, Datang Evernight City Pedestrian Street, Gansu Jiayuguan Guancheng Scenic Area, and Beijing Lama Temple. Many domestic scenic spots in the area have been temporarily closed to the outside world, and the resumption time will be notified separately.

Starting from October 22, tourist attractions in the administrative area of ​​Ningxia Hui Autonomous Region will be temporarily closed.

At the same time, in order to reduce the flow of social personnel, Lanzhou terminated all travel activities of tourists in Lanzhou, adopted on-site isolation, on-site observation, and concentrated nucleic acid testing.

The Shaanxi Provincial Department of Culture and Tourism issued a notice stating that more stringent measures should be taken to implement normalized measures for epidemic prevention and control.

A-level tourist attractions, star-rated hotels and other cultural and tourist sites must strictly inspect the Shaanxi health code (including Xi'an One-Code Pass), communication big data itinerary card, and negative nucleic acid test within 48 hours for returning personnel from outside the province. Those who cannot be provided are not allowed to enter Scenic spots and star-rated hotels are not allowed.

Announcement (No. 12) of the Ningxia Hui Autonomous Region's Headquarters for Response to the New Coronary Pneumonia Epidemic.

Under the influence of the epidemic, some theaters are facing closure again.

Recently, Ningxia and Gansu have successively issued announcements to close down theaters, cultural and entertainment venues, and public cultural service venues in the region.

Since October 25, many movie theaters in Changsha, Hunan have temporarily suspended operations in order to cope with the epidemic prevention and control. The reporter checked on the ticket purchase platform and found that many movie theaters indicated that "there is currently no show schedule."

In an interview with the media, a person in charge of the studio said that the time for the resumption of business is uncertain.

On October 27, Heihe City, Heilongjiang reported a confirmed case of new coronary pneumonia. In order to effectively block the spread of the epidemic, local theaters, Internet cafes, and individual clinics were temporarily closed.

In addition, many domestic large-scale marathons have also announced the postponement.

On October 24, the Beijing Marathon Organizing Committee issued a postponement announcement. Due to the recent occurrence of multiple local confirmed cases outside Beijing in Beijing, in order to prevent the spread of the epidemic, the 2021 Beijing Marathon originally scheduled to be held on October 31 was postponed. .

Announcement on the postponement of the 2021 Beijing Marathon.

Recently, the epidemic is still an important factor affecting the landing of various performances. Many concerts, tours, and music festivals have been postponed.

On the 25th, the Sichuan Provincial Department of Culture and Tourism issued a notice to minimize the holding of meetings, trainings, performances and other gathering activities under the unified arrangement of the local epidemic prevention and control headquarters in accordance with the principle of non-necessary and non-organization.

If the scale of the event exceeds 100 people, the participants must undergo nucleic acid testing.

In response to the call for the prevention and control of the epidemic, the "2021 Li Yuchun Happy Weekend Concert" originally scheduled to be held in Chengdu from November 5 to November 6 has been postponed, and the holding time will be notified separately.

Wang Sulong's studio also announced recently that the "Wang Sulong 2021 Grand Entertainer Tour Wuhan Station, originally scheduled to be held on October 30th, has been postponed to December 4th. This is another postponement of Wang Sulong's concert.

The 12th Midi Awards, the first time the award ceremony was held in Binzhou, Shandong, was also postponed due to the epidemic. The specific time is to be determined.

At the end of the postponement announcement, the Midi Award Ceremony Organizing Committee wrote: "For the next meeting, please continue to protect yourself and reduce unnecessary flows and gatherings. Please still keep hope and live a good life. Let's start from scratch. Come again." (End)