Objection to traffic violations within one month of receiving the notification

Abu Dhabi Police reported that drivers can object to traffic violations within a month from the date of notification of the violation, via a text message to the vehicle owner, via his phone numbers registered in his traffic files. 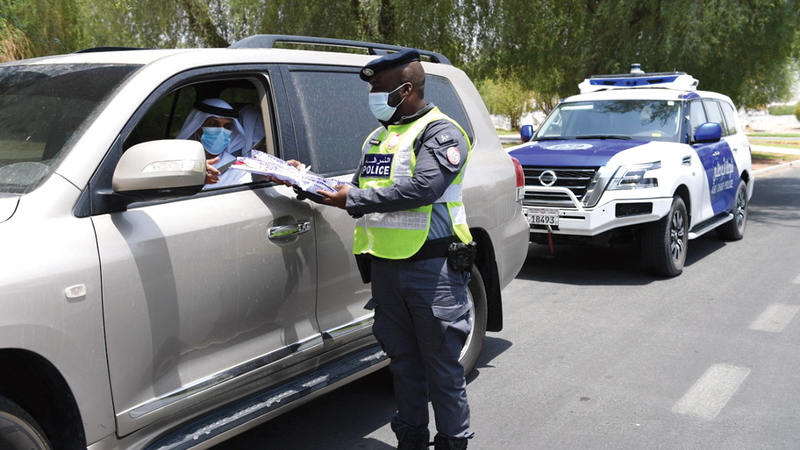 Objection to traffic violations within one month of receiving the notification

Abu Dhabi Police reported that drivers can object to traffic violations within a month from the date of notification of the violation, via a text message to the vehicle owner, via his phone numbers registered in his traffic files.

Inquiries were received to "Emirates Today" from drivers, recently, about the mechanism for objecting to traffic violations that are registered against them, and the date for submitting the objection to them, expressing their fear of being subjected to violations during the recent period, due to not leaving enough distance when opening the "stop" arm when School buses stopped, through the cameras installed in those buses, stressing that some bus drivers stop suddenly while walking, leaving no room for them to stop five meters away (the required distance).

The Director of the Traffic and Patrols Directorate in the Central Operations Sector, Brigadier General Muhammad Dhahi Al-Hamiri, told "Emirates Today" that based on Ministerial Resolution No. 178 of 2017 regarding traffic control rules and procedures, the vehicle owner is notified of the details of the violations recorded on the vehicle, and the relevant authorities are reviewed during A month from its date, to allow him the opportunity to object to the violation, or that another driver committed it, unless the violation was in his presence.

He stated that in the event the driver does not attend during the specified period, the vehicle and its owner will be charged with the administrative penalties prescribed for traffic violations, where the failure of the owner to review or object to the violation is considered a presumption of having committed the traffic violation unless proven otherwise.

The Directorate of Traffic and Patrols, through awareness campaigns that it recently implemented, confirmed the Abu Dhabi Police's interest in the safety of the public before issuing any violation against violating drivers, pointing out that it implemented an initiative in the city of Al Ain, to enhance field awareness by informing drivers of the importance of avoiding and avoiding the accumulation of violations.

She added that truck drivers were urged to avoid violations that cause serious traffic accidents, such as overloading, and not to overtake between lanes, stressing the intensification of traffic control and law enforcement on violators as a strategic priority to make roads safer.

She drew attention to the continuous interest in launching traffic awareness campaigns in several languages ​​and through various media, including social media, in order to raise the level of traffic culture among drivers and road users with the most frequent traffic violations, including preoccupation with other than the road.

Abu Dhabi Police implemented several initiatives to facilitate the payment of traffic violations for drivers, including an agreement with five banks to pay traffic violations incurred by vehicles and drivers using credit cards issued by them.

The Directorate of Traffic and Patrols called on drivers to take advantage of the initiative to install traffic violations without interest, explaining that the conditions and steps for benefiting from the service were defined in terms of the customer having a credit card (a covered card issued by five banks: First Abu Dhabi, Abu Dhabi Commercial, and Mashreq Islamic Abu Dhabi Islamic Bank and Emirates Islamic), and directly contacting one of the banks that provide the service within a period not exceeding two weeks from the date of payment of the amount and requesting the installment of the violations.

The service allows the payment of fines through Abu Dhabi Police service centers and digital channels, such as the website and smart phone application, in installments for a period of one year without calculating any interests on the beneficiaries.

She stated that drivers can follow up on their traffic violations and pay them through the digital service channels of the Abu Dhabi Police, such as the website, smart phone application, and "Sahel" self-service devices spread across the emirate.