Here, Anna Ekström is pressured about the criticized Pisa answer

Minister of Education Anna Ekström was severely criticized for handling the Pisa survey. In SVT's 30 minutes, she is pressured about answers she previously gave about the survey. - I had absolutely no information that students had been deliberately excluded, says Anna Ekström for 30 minutes. 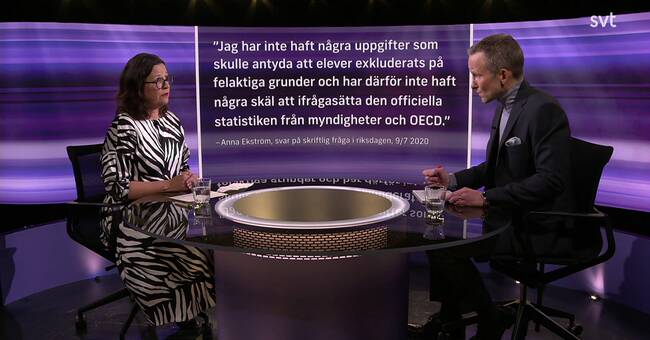 The Pisa survey, which was presented in 2019, was a message of joy for the Swedish school, but has been questioned by both politicians and the media for having excluded too many foreign-born students.

Minister of Education Anna Ekström (S) was asked in May in the Riksdag's Education Committee.

A key issue was when she took part in the memorandum that was drawn up at her ministry and which contained information that students in the Pisa survey 2018 had been excluded on incorrect grounds.

In a written response to the Riksdag on 9 July 2020, Anna Ekström had written "I have not had any information that would indicate that students have been excluded on incorrect grounds".

Several parties believe that she obscured information that too many students were allowed to forgo the test.

Watch the entire interview with Anna Ekström for 30 minutes on SVT Play 19.30