After the secret vote, the president of Palazzo Madama, Casellati, suspended the session that will resume at the end of the Conference of group leaders 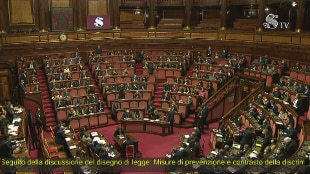 October 27, 2021 The Senate Chamber approved the proposal not to pass to the examination of the articles of the Zan bill.

The so-called 'trap' presented by Lega and Fdi obtained 154 votes in favor, 131 against, and two abstentions.

After the secret vote, the president of Palazzo Madama, Casellati, suspended the session which will resume at the end of the group leaders' conference.

The president of the Senate Elisabetta Casellati in the morning had declared admissible the requests for a secret vote presented by Lega and Fdi on the Zan bill for the fight against homotransphobia. Casellati had accepted the request not to pass to the examination of the articles of the Zan bill, precisely the so-called 'trap', based on the Regulations and on the basis of the previous ones, she explains. "There are two proposals not to pass to the articles signed by Calderoli and La Russa: the President deems these two secret ballot requests admissible on the basis of the regulations and the precedents", explains the President.

"Who for months, after the approval in the House, has followed the sovereign sirens who wanted to bury the Zan bill is responsible for today's vote in the Senate. A political pact that wanted the country to take a step towards civilization has been betrayed. The responsibilities are clear ". Thus Alessandro Zan, father of the bill against homotransphobia, buried with today's vote in the Senate.

"Defeated the arrogance of Letta and the 5Stelle: they said no to all the mediation proposals, including those formulated by the Holy Father, associations and many families, and they drowned the Zan Bill. Now let's start again from the League's proposals: fight discrimination by leaving children out, freedom of education, gender theory and crimes of opinion ". League leader Matteo Salvini says so.

"The arrogance of Cinque Stelle and Pd produced an incredible defeat, not only for Parliament, which lost the opportunity to pass a civilization law, but for the many women and men who were waiting to finally be protected from aggression and discrimination ". This was declared by Maria Elena Boschi, president of the deputies of Italia Viva.

Garavini: "With the agreement proposed by Iv it would have been possible to avoid sinking"

"What just happened in the Senate represents a bad page in the history of the country's rights. Today we could have protected those who are victims of aggression against the LGBT community. And we could have done it for some time, reaching a compromise with those who had already said open to dialogue in Parliament. Part of the Democratic Party and the 5-stars preferred instead to go to the wall-to-wall clash, even though they knew that this was the risk. Now the game is over. As Italia Viva we have tried to the last to avoid this outcome. Sorry that others have chosen to play on the skin of the many who, instead, awaited and deserved this law ". This was declared by Senator Laura Garavini, Deputy Group Leader Italy Viva-Psi.

Vito to Berlusconi: "I resign as Forza Italia defense manager"

"My resignation letter to President Berlusconi as head of the Defense and Security Department of Forza Italia, after our vote in favor of not moving to the #DDLZan articles was announced in the Senate".

The deputy of FI, Elio Vito, writes it on the social networks, who also attaches the photo of the text sent to the Cavaliere.

Sensi: "I am ashamed as a citizen and parliamentarian"

So Filippo Sensi, deputy of the Democratic Party, after the vote that drowned the Zan bill.