Chinese ambassador to the UK writes: China is committed to the issue of climate change and has achieved remarkable results

China News Service, October 27. According to the website of the Chinese Embassy in the United Kingdom, on October 27, 2021, the website of the leading British newspaper "The Guardian" will be titled "China's commitment to climate change issues, with remarkable results." , Published an article signed by China’s Ambassador to the UK Zheng Zeguang, introducing China’s policy stance on the issue of 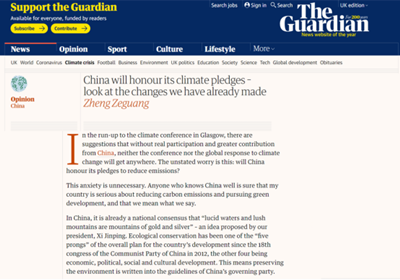 China News Service, October 27. According to the website of the Chinese Embassy in the United Kingdom, on October 27, 2021, the website of the leading British newspaper "The Guardian" will be titled "China's commitment to climate change issues, with remarkable results." , Published an article signed by China’s Ambassador to the UK Zheng Zeguang, introducing China’s policy stance on the issue of climate change.

The full text is as follows:

Image source: Website of the Chinese Embassy in the UK

The 26th Conference of the Parties of the United Nations Framework Convention on Climate Change (COP26) hosted by the United Kingdom is about to be held. I heard some people express their concerns about whether China can fulfill its emission reduction commitments and believe that if China does not actually participate in the meeting and make greater contributions , COP26 and global efforts to deal with climate change are difficult to succeed.

I think that if you have enough knowledge about China, you will know that China is serious about reducing carbon emissions and achieving green development. China will do what it says, and the above worries are unnecessary.

First of all, the concept of "green water and green mountains are golden mountains and silver mountains" proposed by President Xi Jinping has become the consensus of the entire Chinese society.

Second, China announced the "dual carbon" goal last year, which is to strive to achieve carbon peaks by 2030 and carbon neutrality by 2060. Last month, at the 76th General Debate of the UN General Assembly, President Xi reiterated this. On the target, and announced that China will no longer build overseas coal-fired power projects.

At the 15th Conference of the Parties (COP15) Leaders’ Summit of the Convention on Biological Diversity, which has just concluded, President Xi further proposed four major policy propositions for the protection of biodiversity (that is, to take the construction of ecological civilization as a guide, and coordinate human and nature Relationship; driven by green transformation to promote sustainable global development; centered on people’s well-being to promote social fairness and justice; based on international law to maintain a fair and reasonable international governance system), advocating the joint construction of a community of life on earth.

Under Chinese leadership, the "Kunming Declaration" has been passed, and China has also initiated the establishment of the Kunming Biodiversity Fund and provided the first batch of 1.5 billion yuan in start-up funds.

These all reflect the determination and determination of China's top leaders to protect the ecology and deal with climate change.

Third, anyone who understands China’s political system knows that once the CPC Central Committee and the top leaders determine major issues and put forward policy goals, they will be included in the overall national development plan, turned into an operational plan of action, and received practical results from various localities and departments. Implement.

In the 72 years since the founding of New China, China’s miracle of development has been achieved in this way.

In fact, China has exceeded the 2020 climate action target ahead of schedule.

As of the end of 2020, carbon intensity has been reduced by about 48% compared to 2005, and non-fossil energy accounts for approximately 16% of primary energy consumption.

China is building a "1+N" policy system to achieve carbon peak and carbon neutrality, and will adopt a series of policy measures in many major areas.

China has launched the world’s largest carbon market online transaction, is advancing the world’s largest nuclear power construction, and is accelerating the planning and construction of large-scale wind power photovoltaic base projects in deserts, Gobi, and desert areas. The first phase of the project with an installed capacity of approximately 100 million kilowatts has recently Start work in an orderly manner.

Fourth, starting from the concept of building a community with a shared future for mankind, China is doing everything it can to help developing countries improve their ability to cope with climate change.

China has launched a green action initiative in the construction of the "Belt and Road" to promote green infrastructure, green energy, green transportation, and green finance.

In 2020, the proportion of renewable energy investment in China's total investment in the “Belt and Road” countries will increase from 38% in 2019 to 57%.

China will continue to vigorously support the development of green and low-carbon energy in developing countries.

The international community must realize that, as a large developing country with a population of more than 1.4 billion and still in the process of industrialization and urbanization, China’s nationally determined contribution goals and policy measures adopted for the global response to climate change are not easy.

China's self-increasing pressure is not only to achieve its own sustainable development and benefit its own people, but also to make a major contribution to the global effort to protect the ecology and respond to climate change.

As a developed country that has been industrialized for hundreds of years and left a lot of historical debts, it should make greater contributions to pollution control and protection of the human environment, rather than blindly transferring responsibilities to China and other developing countries.

China is willing to work with the UK to implement the important consensus of the leaders of the two countries, strengthen communication and coordination between COP15 and COP26, support COP26 to achieve positive results, and promote the full, effective and continuous implementation of the Paris Agreement.

All parties must adhere to the principles and requirements of the Convention and the Paris Agreement, complete the negotiations on the implementation rules of the Paris Agreement, especially Article 6 of the market mechanism, and promote positive progress on issues such as adaptation and funding that are of concern to developing countries. As an important goal.

We must adhere to the principles of common but differentiated responsibilities, fairness, and respective capabilities.

Developed countries should and must undertake the obligation to take the lead in reducing emissions significantly. This is the key to achieving global net zero emissions at an early date.

We must focus on implementation and strengthen international mutual trust. In particular, we must implement the pledge made by developed countries a few years ago to provide developing countries with 100 billion U.S. dollars each year by 2020.

All countries should believe in their words and resolute in their deeds. They should not verbalize but refrain from chanting empty slogans.

Both China and Britain are countries with important international influence and should make greater contributions to human development and progress.

China and Britain have great potential for cooperation in protecting biodiversity and tackling climate change.

We must work with the international community to strengthen policy dialogue, policy coordination and pragmatic cooperation in the fields of green development and ecological protection, so as to benefit the two peoples and promote the building of a community of life on earth.