Bad weather. A night of respite in Catania, fear of 'medicane'. Summit in the Prefecture with Curcio 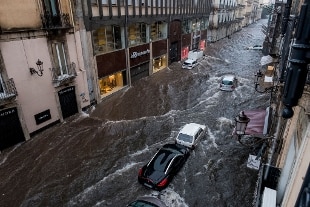 October 27, 2021It is not raining this morning in Catania in the aftermath of the storm that hit the city and the entire province and which resulted in the death of a man, who got out of his car surrounded by water and pulled out by lifeless rescuers from under the his car.

Damages with flooding to roads, shops and homes are also enormous.

Numerous yesterday were the rescue interventions of the Fire Brigade especially to motorists who were trapped in their cars in streets that have become rivers in flood.

There are about 190 requests for assistance that have yet to be dealt with by the Fire Brigade, who during the night disposed of those that arrived yesterday, about forty, especially for flooding homes and basements and to remove obstacles from the streets "Compared to yesterday - he said the head of the fire brigade of Catania Giuseppe Biffarella - we now have an increase in terms of men from Puglia who are equipped to face flood scenarios. If they happen again, we will be able to give further answers ". Meanwhile, the summit in the Prefecture in Catania has begun to take stock of the bad weather emergency. Among those present the head of civil protection Fabrizio Curcio, the head of the regional department of civil protection, Salvo Cocina,the prefect Maria Carmela Librizzi and the mayor of the Etna capital Salvo Pogliese.

The President of the Republic, Sergio Mattarella, phoned this morning to the mayor of Catania, Salvo Pogliese, to get information on the serious emergency and to express his closeness to the city so affected by bad weather. This is what we read in a note from the Quirinale.

Minute of silence in the Senate in memory of victims

This morning, in the meantime, President Maria Elisabetta Casellati - at the opening of the proceedings - was asked for a minute of silence in the Senate Chamber "in memory of the broken lives in Sicily, as well as of all the victims of environmental tragedies. that have marked our country ".

"Today the situation has improved in Catania. The problem will come tomorrow or the day after tomorrow, the forecasts are alarming. There is also talk of a very strong wind over 100 kilometers per hour. We hope that the forecasts will not

be confirmed by the civil defense. Tomorrow and the day after tomorrow there could be a lot of days. difficult for our land "so the mayor of Catania, Salvo Pogliese, guest at" The Breakfast Club "on Radio Capital.

"In twenty-four hours in Catania 300 mm of rain, the annual average of the city is 600 mm. We are in the presence of an unprecedented phenomenon. I will propose to the head of civil protection Curcio the closure of commercial activities for the next two days, excluding of those who sell basic necessities. Today, however, only the schools closed. We do not yet know what the damage is, but we are talking about damage to agriculture, real estate and commercial activities. I ask everyone to stay at home. Absolute prudence is important " .

Hearings suspended at the Court of Catania

The president of the Court of Syracuse, Dorotea Quartararo, has ordered the suspension of the hearings at the courthouse for today, "except for any extensions". The decision was taken due to bad weather forecasts, at the request of the president of the Syracuse Bar Association who, in the past few hours, called for a stop to the hearings until Friday. The provision, as explained by the President of the Court, took into account "the need to avoid dangers to the safety of people, in consideration of the fact that the hearing in presence requires the displacement of numerous lawyers from the various municipalities of the territory and of the magistrates authorized to reside outside the Municipality of Syracuse ".

In just three days of bad weather, as many as twenty water bombs hit Sicily and Calabria, causing victims and damage in cities and countryside . This is what emerges from the Coldiretti balance sheet on the effects of the latest wave of bad weather that hit Calabria and Sicily, based on data from the European Severe Weather Database (ESWD). The hardest hit region - underlines Coldiretti - is Sicily where almost all the storms were concentrated for a total of 17 extreme events that affected the provinces of Catania, Ragusa, Syracuse and Trapani.

The most devastating events - Coldiretti specifies - occurred in Linguaglossa in the province of Catania where on Sunday 320 mm fell for a duration of 18.5 hours while Monday in Catania the rainfall on Monday lasted 8 hours with the fall of 127 mm of water while on Tuesday 98 mm fell with a rain duration of 7 hours.

Violent storms and wind storms hit a region like Sicily which has - underlines Coldiretti - 92.3% of the municipalities with part of their territory at risk of landslides and / or floods with soils that are unable to absorb the water that falls violently and tends to move away by sliding causing flooding and landslides. A situation that - explains Coldiretti - gets worse in Calabria where it even rises to 100% of the municipalities. The result was struck structures, collapsed fences and walls and interrupted roads with difficulty for traffic and to reach companies.

We are facing - underlines Coldiretti - the consequences of climate change also in Italy where the exceptional nature of atmospheric events is now the norm, with a tendency to tropicalization that manifests itself with larger hail, a higher frequency of violent events, seasonal delays, short and intense rainfall and the rapid transition from the sun to bad weather, which also compromise crops in the fields with estimated costs that have already exceeded two billion this year between losses of national agricultural production and damage to structures and infrastructures in the

"It was an event of unprecedented violence. It had never happened in the 17 years of the hospital's life. A river in flood that flooded the hall on the ground floor and the three basement floors." This was stated by Fabrizio De Nicola, general manager of the Garibaldi Hospital in Catania flooded by the flood.

"The emergency teams immediately intervened - he said -, with the Civil Protection and the firefighters we first of all made safe the hospitalized patients and those who come every day. services, radiology, the birth center, the analysis laboratory, gynecology. Fortunately we have moved patients and basic services to the another complex in the historic area of ​​the city ".

Geologists: "Redesigning the development of the territory"

"In the last 48 hours, 265 mm of rain have been recorded in the city, that is about one third of the total annual rainfall that on average occurs in the Catania area. The frequency with which the dramatic scenes we are witnessing recur in these hours it unequivocally demonstrates that it is necessary to redesign the development of the territory in a new perspective, trying to remedy the errors of decades of lack of and / or inappropriate territorial planning ". This was stated by Sergio Di Marco, Sicilian president of Sigea (Italian Society of Environmental Geology).

"In these hours the city of Catania and a large part of eastern Sicily are experiencing moments of great difficulty due to the incessant rains that have been falling on the territory for several days. In the last 48 hours, 265 mm of rain have been recorded on the city, or about a third of the total annual rainfall that on average persists in the Catania area, and the forecasts for the next few days indicate a further deepening of the low pressure vortex with the persistence of the rain, outlining a highly worrying scenario. transformed exceptional meteorological events every ten years into frequent events that occur several times a year, requiring further effort and planning that is not only of an emergency type ".

"The frequency with which the dramatic scenes we are witnessing in these hours are repeated unequivocally demonstrates that we need to redesign the development of the territory from a new perspective - added Di Marco - trying to remedy the errors of decades of failure and / or inappropriate territorial planning. The fragility of the Etna territory is emerging in all its drama and in particular I would like to underline how the situations of serious criticality are manifesting themselves not only in the more urbanized areas but also in the rural ones, affecting entire hydrographic basins both as regards the consequences of flood water outflows and the stability of the slopes ".

Cyclone - after loss of strength - from tomorrow strengthens in the south

The cyclonic vortex that is raging with extreme violence on eastern Sicily, after a temporary loss of strength, will strengthen further from tomorrow and will reach Sicily in the course of Friday. Experts warn that after a Wednesday certainly less rainy for Sicily and good weather for the rest of Italy, from tomorrow the cyclone will set off towards the island with the risk of becoming a dangerous medicane. This term derives from the fusion of the English words 'Mediterranean' and 'hurricane', literally "Mediterranean hurricane" as due to the physical characteristics of the atmospheric structure it recalls the "monsters" that form on the oceans. If this were to materialize, the bad weather will still become really heavy especially in central-eastern Sicily,northern and then on the Ionian Calabria, which will be lashed by stormy winds, heavy and persistent rains for over 24-48 hours.

If Thursday it will rain extensively only on Sardinia, Friday will be the crucial day in which the possible medicane, positioned right on Sicily, will unleash all its violence on the island and on Ionian Calabria.

The rest of Italy, on the other hand, will stand by and watch, thanks to the shelter offered by the high pressure.

Around the depression center, winds could blow with gusts above 100 km / h generating intense storm surges on the coasts.