The coalition targets militia sites in Marib, Al-Jawf and Saada

The fighters of the Arab Coalition to Support Legitimacy in Yemen continued their air operations against Houthi militia sites and targets in Marib Governorate, to support tribes and Yemeni army units in thwarting Houthi attacks towards the city of Marib and oil sources in Safer. 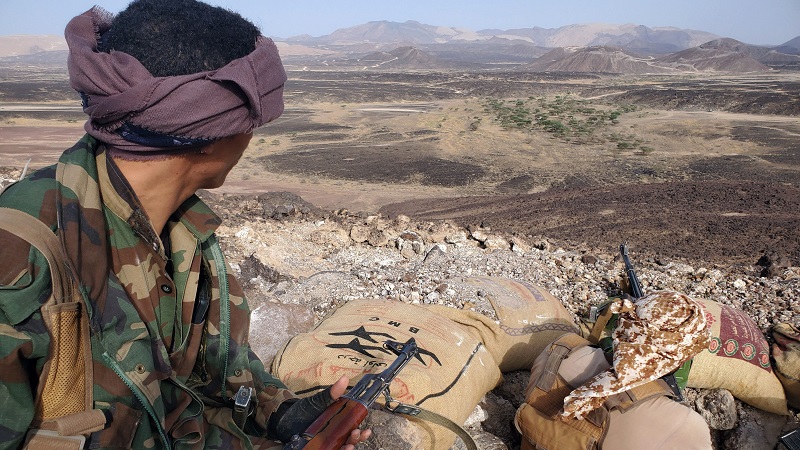 The coalition targets militia sites in Marib, Al-Jawf and Saada

Two elements of the Yemeni army on one of the Marib fronts.

The fighters of the Arab Coalition to Support Legitimacy in Yemen continued their air operations against Houthi militia sites and targets in Marib Governorate, to support tribes and Yemeni army units in thwarting Houthi attacks towards the city of Marib and the oil sources in Safer, as well as targeting Houthi sites in Al-Jawf and Saada.

Field sources stated that the coalition raids led to the destruction of Houthi mechanisms, and prevented militia reinforcements from reaching the Juba and Jabal Murad fronts, and led to the death and injury of many Houthis, while the battles intensified in the vicinity of the "Al Jadeed" area in Juba.

Field sources confirmed the failure of the Houthi militia's attempt to position itself near the supply lines in the Jabal Murad district, after coalition fighters launched a series of raids on Houthi sites and concentrations in separate areas around Murad Mountain.

This coincided with the continuation of the battles between the two sides on the fronts of "Al-Kasara and Al-Mashjah, west of Marib", where the militias incurred heavy losses in the ranks of their fighters and fighting mechanisms.

In Al-Jawf, coalition fighters continued to target Houthi militia sites in the city of Al-Hazm, the provincial capital, and in the Khub and Al-Sha`af district, leaving dead and wounded militia members, and led to the destruction of a number of Houthi combat mechanisms.

In Saada, coalition fighters demolished a Houthi militia site in Kitaf district, causing huge explosions at the target site as a result of the Houthis' storage of rocket-propelled grenades and various ammunition.

In Hodeidah, the joint forces demolished new Houthi dens and sites in several areas of contact on the western coast, and were able to destroy fortifications, thwarted Houthi movements in the sectors of "Kilo 16 and Al-Saleh City" east of Hodeidah, and destroyed Houthi dens in Al-Husseiniya and Al-Jah, in the Bait Al-Faqih district.

The militias bombed the city of Hais with various types of weapons, and a civilian named "Muhammad Fouad Draiban" was wounded by shrapnel as he was leaving his house in the Mughal neighborhood of Hais.

In Taiz, field sources confirmed that 8 Houthis were killed and 12 others were injured in recent confrontations with the Yemeni army and the resistance forces in the Al-Anin front in the Jabal Habashi district, west of the governorate.