Opportunities exhausted: how Latvia responded to the UN call to change attitudes towards migrants at the border with Belarus

The UN called on Latvia to reconsider the attitude towards migrants on the border with Belarus and to respect their rights to apply for asylum. The Office of the United Nations High Commissioner for Refugees handed over the relevant document to the government and the Ministry of Internal Affairs of the country. The department expects from Riga to revise the provisions on the emergency regime and observe the principle of non-refoulement in relation to asylum seekers while their request is pending. However, as noted by the head of the Ministry of Internal Affairs of the Baltic republic, the state has no opportunity for this. Meanwhile, the EU continues to blame Minsk and even Moscow for the problems. Experts believe that political ambitions do not allow Brussels to resolve the situation. 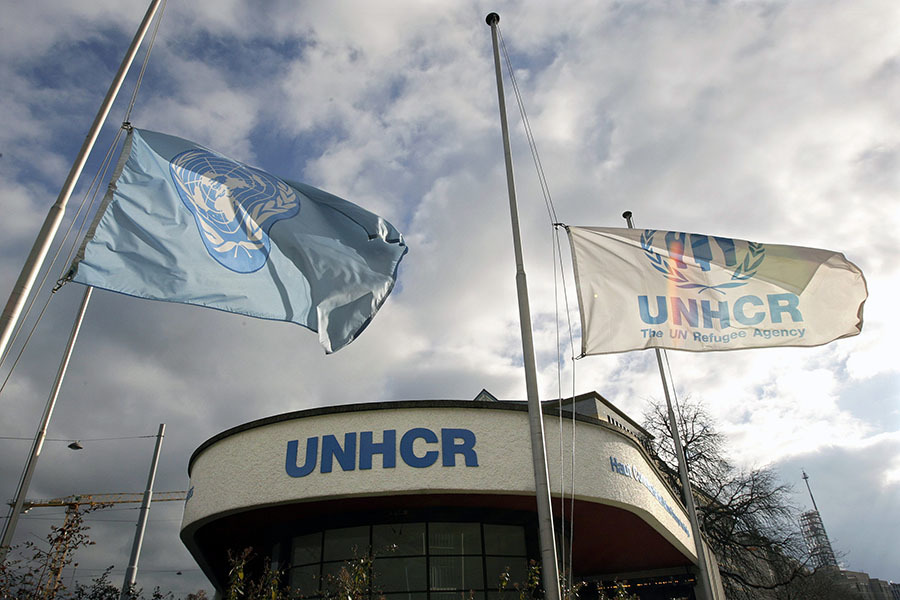 The UN called on Latvia to change its policy towards migrants at the border with Belarus and respect their rights to apply for asylum.

As reported by LETA, the relevant document was sent to the government and the Ministry of Internal Affairs of the country by the Office of the United Nations High Commissioner for Refugees (UNHCR).

It is noted that the department recognizes the problems faced by Riga, and its fears about the politicization of the influx of migrants, however, they indicate that the rights of refugees should not be violated even in an emergency situation.

“As the administration emphasized, although countries have the sovereign right to control their borders and establish the rights of persons to enter and stay in the country, this prerogative is governed by international legal obligations,” LETA noted with reference to the document.

In this regard, the UNHCR stated that the country that received the request for asylum must accept and provide the applicant with everything necessary at least for the duration of the consideration of the request and not expel him.

Therefore, according to the department, Latvia should revise its regulations on the emergency regime and amend it so that such conditions would be provided for all refugees.

As the UN recalled, the relevant provisions are enshrined in the Universal Declaration of Human Rights and the 1951 Convention relating to the Status of Refugees, to which Riga is a signatory, as well as in the Charter of the European Union, which obliges member states to register and process asylum applications.

The state of emergency due to the influx of illegal immigrants was introduced in Latvia on August 10. It was supposed to be removed on November 10, but the country's government decided to extend it until February 10, 2022. Emergency situations apply to Ludza, Kraslava, Augshdaugava regions and the city of Daugavpils. Within the framework of the regime, the state border service is allowed to use physical force and special means to prevent migrants from crossing the territory of Latvia, as well as return those who illegally managed to cross the border back, for example, to Belarus. The border guards are assisted by the armed forces and the police. Also, on the territory of these regions and Daugavpils, applications for asylum are not accepted.

In addition, a barbed wire fence is being built on the border with Belarus, for which € 1.7 million (about 137 million rubles) was allocated from the budget.

Its length should be 37 km.

As reported in the state border service of Latvia, only on October 25, an attempt to illegally cross the border with Belarus by 27 people was prevented.

In total, 1,930 illegal immigrants were not allowed to enter the territory of Latvia since August 10.

The Ministry of Internal Affairs of Latvia commented on the appeal of the Office of the United Nations High Commissioner for Refugees regarding the revision of the country's policy.

As the head of the ministry Maria Golubeva noted, Riga cannot take such a step due to the lack of resources.

“If we let in everyone who is trying to illegally cross the Latvian border from Belarus, this process would last for several months.

Our ability to provide all the necessary asylum seekers would have been exhausted very quickly, ”Golubeva was quoted as saying by TASS on Latvian television.

According to her, only those who are really in danger and who have small children are allowed to enter the country.

Nevertheless, Golubeva noted, 15 to 25 people try to cross the border every day.

And sometimes these are the same people who previously received a refusal from the Latvian side.

“Although we are in control of the border now, it is important to move forward with an infrastructure project (for the construction of a fence. -

At the same time, both in Riga and in Brussels they prefer to blame the authorities of Belarus for the current situation.

Thus, the EU representative to the UN Olaf Skoog, speaking on the eve in the Third Committee of the General Assembly, stated that Minsk politicizes migrants.

“We are faced with numerous attempts (by the Belarusian. -

) regime to use vulnerable migrants for political purposes.

We call on the regime to immediately abandon such practices and other hybrid threats to human life, including barring access to humanitarian aid, ”he said.

In this regard, the leaders of the European Union on October 22 announced their intention to introduce new sanctions against the leadership of Belarus.

Restrictions in the EU are going to resist the "ongoing hybrid attack".

At the same time, the head of the European Commission Ursula von der Leyen said that Brussels will not allocate any funds for the construction of fences and barbed wire fences by Eastern European countries.

At the same time, earlier the Foreign Ministry of Belarus announced Minsk's readiness to hold talks on the situation with migrants.

“Starting from April this year, we offer the European Union to hold consultations on illegal migration issues.

The EU categorically refuses, ”BelTA agency quoted the head of the department Vladimir Makei as saying.

Due to such a position of the EU representatives, the head of Belarus, Alexander Lukashenko, signed a law on October 14 to suspend the readmission agreement between Belarus and the EU, within the framework of which Minsk had previously undertaken to receive citizens who entered the EU countries through its territory.

Finding the key to the problem

However, the EU is not limited to accusations against Belarus only.

According to a number of European politicians, Russia is also involved in the situation.

Earlier this was stated by the Minister of Defense of Sweden Peter Hultkvist, stressing that Moscow allegedly wants to destabilize the EU countries and put pressure not only on the region, but also on the entire European Union.

“Our opinion ... is that Russia is behind all this.

They are very interested in this situation, "- quoted TASS Hultqvist.

A similar point of view was later expressed by the Minister of the Interior of the Federal Republic of Germany Horst Seehofer.

"We (in the government of the Federal Republic of Germany. -

) are all convinced that the key to solving the problem lies in Moscow," he said.

According to him, the government in Minsk does not act "without the knowledge or approval of Moscow."

The official representative of the department, Maria Zakharova, in a commentary to RT DE said that the keys of the problem lie in the Western capitals, including in Washington and Brussels, since they are responsible for the crisis that arose due to “military interventions in Iraq, Libya, Syria , Afghanistan ".

“Calls to Minsk and Moscow to stop the refugee exodus in the form in which it was all presented are simply untenable given the actions of the Western coalition in the Middle East, North Africa and Afghanistan.

What does Minsk and Moscow have to do with it, how did they even manage to combine these themes?

All this looks at least strange, ”the diplomat said.

At the beginning of September, Russian President Vladimir Putin also drew attention to the fact that the European Union should negotiate directly with Belarus.

“They ask me to somehow influence this.

The answer is very simple: this does not concern us, this is not our border.

This is the border of the Republic of Belarus and the state border of Lithuania and Poland.

Russia has nothing to do with it, this is a sovereign affair of Belarus and its neighbors, ”the Russian leader said.

Experts called the response of the Minister of Internal Affairs of Latvia Maria Golubeva to the Office of the UN High Commissioner for Refugees to the recommendation to change the attitude towards migrants predictable.

“Despite the fact that Latvia is a member of the UN and positions itself as a state committed to all democratic norms, throughout its short existence this country only does what violates human rights.

This also applies to the Russian-speaking population, and the closure of the media, and the persecution of journalists and human rights defenders.

In this sense, Riga will not follow the wishes of the UNHCR, since its entire policy indicates its unpreparedness to respect human rights, including refugees, "said Vladimir Shapovalov, deputy director of the Institute of History and Politics at Moscow State Pedagogical University, in an interview with RT.

In his opinion, in general, the situation that is now observed on the borders of the Eastern European and Baltic countries suggests that both Latvia and its neighboring states are not effective subjects.

“We are not talking about hundreds of thousands, but about an insignificant number of refugees who should not become a serious problem for a normally functioning state.

They reveal a number of problems that exist in Latvia, ”the expert said.

Among these problems, he named the lack of an adequate degree of order in the border service, constant failures in the law enforcement system, lack of understanding and unwillingness to solve this problem, taking into account the interests of both Latvian citizens and refugees.

In addition, as Sergei Rekeda, director of the Center for the Study of Integration Prospects, noted, Latvia, like the European Union as a whole, is obscured by geopolitical ambitions, because of which Brussels is not able to compromise.

“Geopolitics and political pressure on Minsk are more important than economic and humanitarian issues.

Confrontation with Belarus is a political issue, and there is no reason to expect that the West will change its attitude towards Belarus because of the refugee problem, ”Rekeda said in a commentary on RT.

In addition, he stressed, the EU cannot get rid of the prejudice that “Belarus is an object” and that all issues related to it must be resolved through Moscow.

“That is, the EU wants, on the one hand, to save face, and on the other, to solve the problem.

Obviously, it will not be possible to do this, because Russia has stated many times that it has no opportunity to solve the problem behind the back of Minsk, and neither has the desire, ”summed up Sergei Rekeda.