Milan does not stop, they beat Torino 1-0 with Giroud

Grenade defeated by measure, Pioli's team temporarily moves to +3 over Napoli, taking the solitary top of the standings 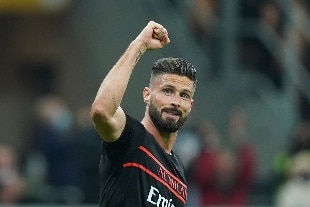 26 October 2021 AC Milan made no mistake against Torino and, albeit with a few more difficulties than expected, hit yet another victory of this start of the championship.

Grenade defeated by 1-0 with Olivier Giroud's goal: Pioli's team temporarily moves to +3 over Napoli, taking the solitary top of the standings.

Despite a good performance, however, Juric's formation returns to lose, standing at 11 points.

San Siro's equilibrium is broken in the 14th minute, when a corner from Tonali is extended by Krunic at the far post, where Giroud only has to push the AC Milan 1-0 into the net. The grenades do not demerit but fail to create great dangers from the parts of Tatarusanu, so the team of Pioli manages without particular problems. At the beginning of the second half, Toro has a great chance to equalize with Belotti, who, however, kicks the ball in an attempt to kick right, wasting an excellent chance. The biggest guest goal ball, however, has it the newly entered Sanabria in the 76th minute: the Paraguayan runs away face to face with Tatarusanu calling him to a providential parade to save his team.

In the end Praet also nearly equalized, hitting the top of the crossbar with a shot deflected by Tomori.

Sanabria has another time-out opportunity but does not take advantage of it.

Milan is saved and celebrates another success.