Covid alert in China: Lanzhou in lockdown. Vaccines for children from 3 years

After the Wuhan one, meanwhile, the Beijing marathon on October 31st, where about 30,000 participants were expected, has also been postponed until further notice.&nbsp; 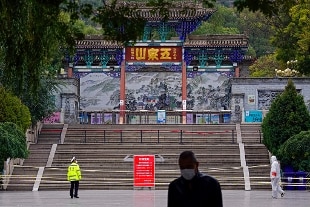 After suspending the marathon scheduled in Beijing, the Chinese authorities have locked down Lanzhou, a city of 4 million inhabitants

Meanwhile, the vaccine against Covid is beginning to be administered to children aged three years and over, aiming to increase the current share of 76% of the population to which the complete cycle of the two doses has so far been administered, to increase the defenses in the face of a new and insidious wave of infections linked to the Delta variant. Although there have been only 170 cases since October 17, the day of positive results in a group of tourists who flew from Shanghai to Xi'an and then to Gansu and Inner Mongolia, the Beijing authorities have strengthened the measures to pursue the policy of 'zero tolerance' towards Covid and to extinguish the outbreaks as soon as possible, even more so when there are just over 100 days to go until the 2022 Beijing Winter Olympics.

The local governments of various cities and at least five provinces have in recent days issued warnings on the gradual start of vaccination plans also for children of 3-11 years old, after the national health authorities certified the safety of made serums in the summer. in China. While in some parts of the country, such as Beijing itself, operations to inoculate the third dose have been accelerated.

After the Wuhan one, meanwhile, the Beijing marathon on October 31, where around 30,000 participants were expected, was postponed until further notice "in order to prevent the risk of spreading the epidemic and to effectively protect health and safety of most of the riders, staff and residents ". The announcement, which took place when the capital returned under the hood of the worst smog since May (the fine particles of Pm2.5 jumped to 200) due to the massive use of coal against the energy crisis, was followed by measures of containment emergency. Local authorities, in fact, urged residents not to leave the city unless necessary, allowing entry into the capital to those coming from regions without new infections.Xu Hejian, spokesman for the municipal government, explained at a press conference. And, at the same time, they must have the 'green health code (' jiankang bao ') to be shown at the airport, train and bus stations. Tourist sites, parks and theaters can accept attendance reduced to 75% compared to previous levels.

Beijing, which has counted 5 cases of contagion in recent days, has a high-risk residential community and a middle-level community. The National Health Commission also reported in its daily updates that another 35 infections with domestic transmission were detected yesterday: 19 related to Inner Mongolia, four each in Guizhou and Gansu, two in Beijing, Hebei, Hunan and Shaanxi. The Wuhan marathon, the city where the coronavirus was first identified in late 2019, was also expected to take place yesterday with 26,000 participants, but was canceled with short notice over Covid fears. Some cities, such as Lanzhou, the capital of Gansu, and parts of Inner Mongolia have suspended bus and taxi services and closed tourist sites, despite being vital sources for local economies.