Copasir: a law against Islamic radicalization is urgently needed 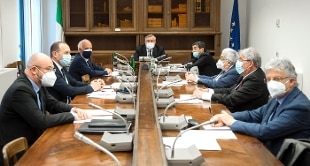 October 26, 2021 The risk of jihadist radicalization phenomena exists and is tangible also in Italy. The Parliamentary Committee for the Security of the Republic remembers this, in black and white, asking for legislative intervention as soon as possible that cannot be postponed. In the report approved today, Copasir highlights a phenomenon that continues to find fertile ground on the web, in prisons and Islamic meeting places. But, in addition to repression, the parliamentary body also calls for the use of prevention and cooperation tools, hoping that - as is already the case for the crime of child pornography - not only the dissemination of propaganda material but also its detention can be punished.

In the last year in Italy, according to the data of the Interior Ministry cited in the document, 71 people have been expelled, while 144 foreign fighters are monitored by the security forces. In prisons, on the other hand, there are 313 inmates subject to monitoring divided into three levels of attention based on the danger of radicalization: "142 are classified as high-level - the report reads -, 89 at medium level and 82 at low level. these prisoners the most represented nationalities are Algerian, 27.16%, and Moroccan, 25.88% ".

"The prison environment - underlines the Committee - remains a delicate context in which the radicalization process can accelerate or start from scratch for sensitive subjects as well as some Islamic meeting places in which radical subjects proselytize and indoctrinate".

The internet and social networks are also under close observation, places "where much of the proselytism and radicalization of those at risk takes place". "On the web, with an effort of coordination between the various operators - still a passage in the relationship -, it is necessary to intercept the crucibles of propaganda and to intervene firmly where the process of radicalization of individuals is underway or has occurred".

Among the tools proposed to counter the spread of propaganda on the Net, Copasir proposes to adopt "programs useful for countering indoctrination that spreads mainly on the deep and dark web through the narrative of influencers, radical imams, lone actors, real and their proponents of hatred towards the West ".

And, precisely in the face of the risk of "violent phenomena" that could also be amplified following the crisis in Afghanistan, Copasir "signals the urgent and no longer postponable need for legislative intervention which, also taking into account the various initiatives mentioned above and in analogy to what happened in other European legal systems, equip our country with a discipline capable of countering in a more incisive way the growing phenomenon of jihadist radicalization ".

Deradicalization, underlines the document that has Enrico Borghi and Federica Dieni as speakers, is fully included in anti-terrorism policies.

"It represents - conclude the parliamentarians - a real security tool for controlling and reducing the subversive threat and the recruitment of European citizens by terrorist organizations".