An XXL Bundestag to start the post-Merkel year zero

Angela Merkel has been acting Chancellor since Tuesday. His 16 years of government ended with the constitution of the Bundestag that emerged from the elections of last 26 of ... 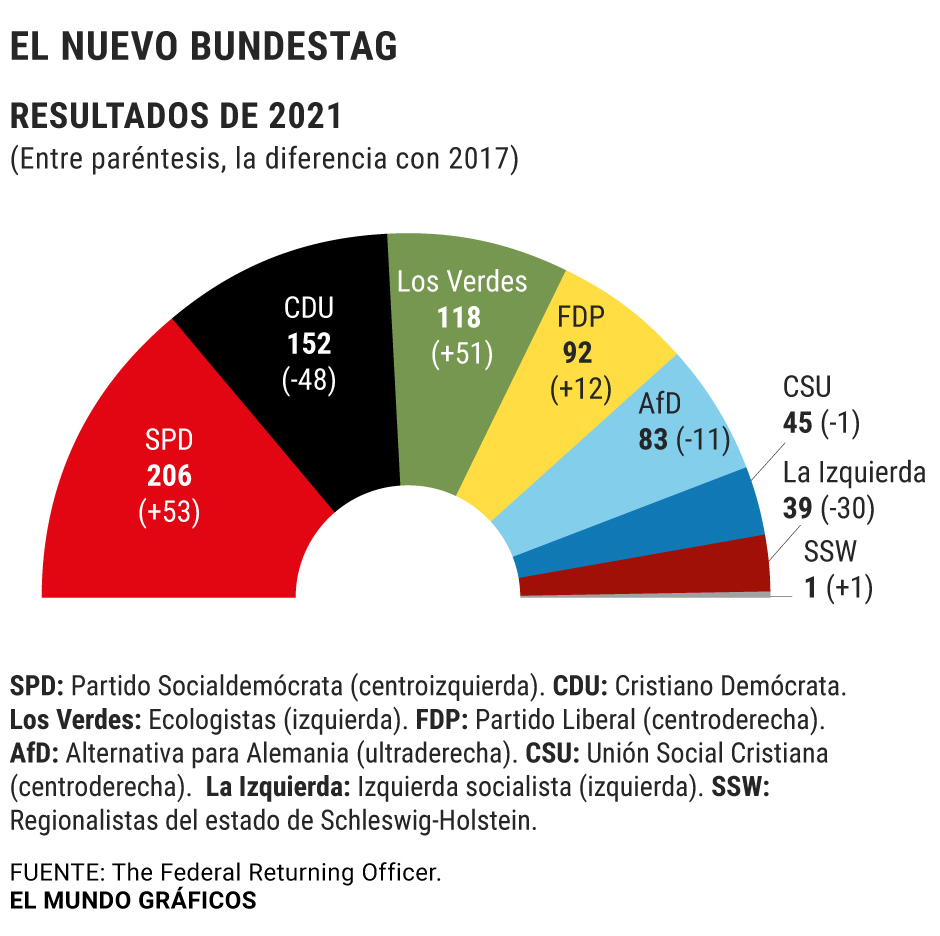 Angela Merkel has been acting Chancellor since Tuesday. Her 16 years of government ended with the constitution of the

emerged from the elections on September 26, after which she and her ministers received their respective dismissal letters from the president, Frank-Walter Steinmeier. However, the grand coalition will remain active until the formation of a government negotiated by the Social Democratic Party (SPD) with the Greens and the Liberals of the FDP. These formations are willing to reach an agreement in November and start the week of December 6.

"My thanks and my respects Chancellor Merkel for these years of work inside and outside our borders. This is the end of a Chancellery that will go down in history as one of the largest in the Republic," Steinmeier underlined in a farewell speech that the honored Chancellor listened to seated,

marking a diamond with her hands and without expressing any emotion.

The first post-Merkel legislature started hours before a Bundestag that happens to be the largest in the history of Germany but with seats reserved for the Government still empty, a ceremony of almost six hours that Merkel followed from the guest gallery with Steinmeier and the Apostolic Nuncio representing the diplomatic corps.

The session started turbulent, with an initiative by the parliamentary group of the populist Alternative for Germany (AfD) against the decision of the outgoing president of the Bundestag, Wolfgang Schaeuble, who moderated the constituent session while parliamentary tradition attributes that function to the older deputy. And the oldest is Alexander Gauland from AfD. The initiative did not prosper and neither did the election of the AfD candidate Michael Kaufmann to one of the vice-presidencies of the Bundestag, despite the fact that all parties with parliamentary representation have the right to a vice-presidency. The legislature starts for AfD as the previous one ended.

Kaufmann comes from the Thuringia regional grouping, led by the extremist Björn Höcke.

The election of the SPD candidate for the presidency of the Bundestag went smoothly.

53, became by a vast majority the

third woman to preside over the Legislature,

until the SPD announced his nomination to the second highest office in the state, just a week ago. The political career of this woman born in the state of North Rhine Westphalia, has been in the shadows. At the age of 20 she entered the socialist youth groups (Jusos), then she joined the regional leadership and as president of the executive of the Rhenish PSP, in 2009, she became a federal deputy.

Bas only became visible during the Covid-19 crisis,

when his parliamentary group gave him a spokesperson in Health.

comes from the most left wing of the SPD,

a current after the elections has also become the majority of the parliamentary group. Its main exponents and now seatmates are the vice president of the SPD, Saskia Esken, and the former leader of the Jusos, Kevin Kühnert, who is debuting as a deputy.

There are many new faces in the new Bundestag, including the president of the CDU and unsuccessful candidate for the Chancellery, Armin Laschet, who resigned on Tuesday as head of the Government of North Rhine Westphalia to become a simple deputy.

After 14 years of absence,

one of Laschet's opponents for the presidency of the CDU and a possible candidate for his succession,

returns to the Legislature

once the party decides how the election will proceed on this occasion.

The largest Parliament in the world

Laschet's entry is the result of the electoral debacle suffered by the CDU as a whole, which has taken away the seats of several ministers. That has taken the case of the Minister of Economy, Peter Almeiner, his colleague in Defense Annegret Kramp-Karrembauer and the Minister of the Chancellery and Merkel's right-hand man, Helge Braun.

In total, there will be

lordships seated under the glass dome designed by Norman Foster to give light and transparency to what happens between the walls of the Reichtag. There are 1

37 more seats than, on paper, the hemicycle should have

for its proper functioning and 248 more than there were in the Federal Republic in 1953. The Bundestag does not stop growing. It has already become the largest Parliament in the world, even ahead of the Indian Legislature, with the difference that Germany has 83.24 million inhabitants and India, the largest democracy in the world, 1.4 billion.

This XXL Bundestag will mean almost

for the public coffers

that already costs the salaries of their lordships, allowances, facilities, current expenses and a workforce of almost 5,000 workers. The taxpayers association has already voiced its criticism. In principle, all

the parties agree on the need to thin the Bundestag

and that has been one of the tasks that Schaeuble failed to carry out, but none is willing to get their hands on the electoral system, which allows access by direct vote of candidates outside of lists.

As for the composition of the new Legislative, there are small news.

The number of deputies increases to represent 34.7% of the Chamber and among them there are for the first time two transgender people, both from the Los Verdes party.

The proportion of deputies born to immigrants also increases from 8.2% to 11.3%, although the population of foreign origin in the country is 26% and, to the satisfaction of an aging country like this,

the average age in the

The youngest deputy is Emilia Fester, 23, from Los Verdes and the oldest, Gauland, 80 years old.

StoriesFrom 9/11 to the coronavirus pandemic: two decades trapped in the hypervigilance society