"There is a sounding of the soil": why in Ukraine they started talking about a change in the form of government

There is no demand in Ukrainian society to change the form of government in the country from parliamentary-presidential to presidential. This was announced by the head of the Servant of the People faction in the Verkhovna Rada David Arakhamia. So he commented on the words of the Secretary of the National Security and Defense Council Oleksiy Danilov about the need to strengthen the role of the head of state in the management system of Ukraine. Arahamia described the initiative as a personal opinion of the NSDC secretary. He also noted that such issues are resolved only in a referendum. According to RT sources in the political circles of Ukraine, with similar statements, the team of Volodymyr Zelensky is trying to probe the reaction of citizens to a possible expansion of presidential powers. In turn, analysts believe that even if the form of government changes, it will not solve the country's problems. 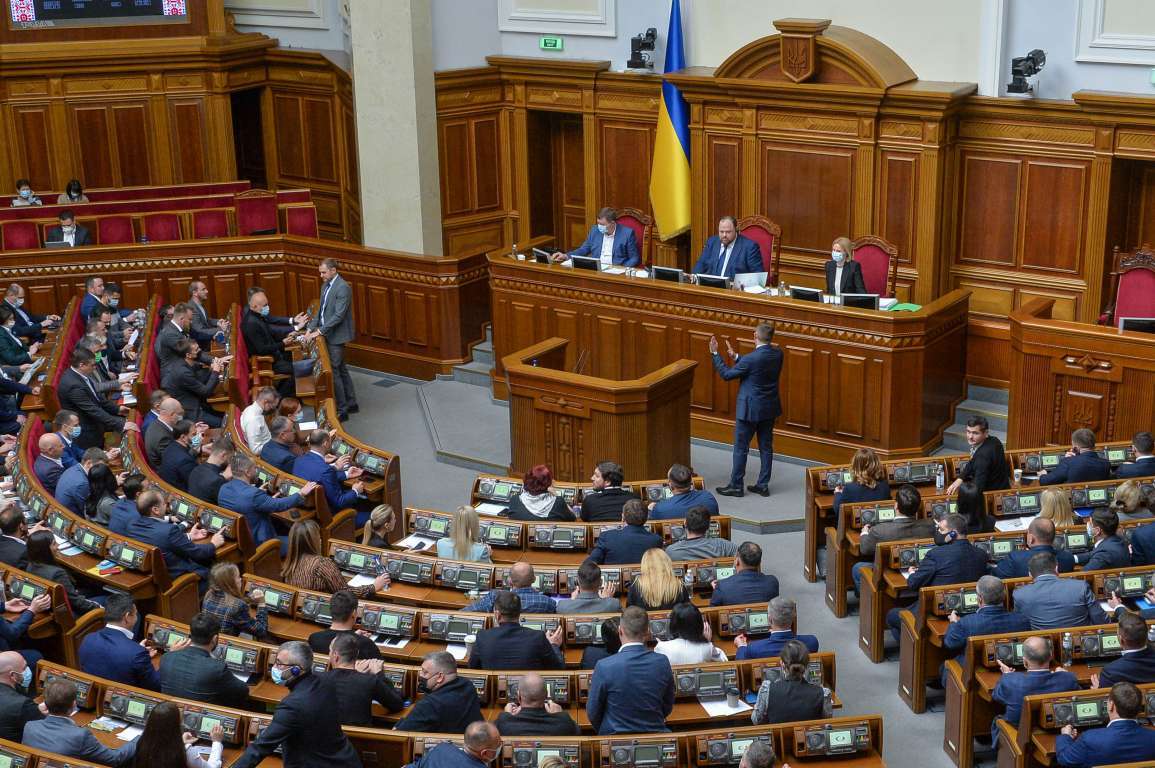 In Ukraine, the issue of changing the form of government from parliamentary-presidential to presidential is not worth it and is not relevant.

This was stated by the head of the pro-presidential party in the Rada "Servant of the People" David Arakhamia.

So he commented on the earlier statement made by the Secretary of the National Security and Defense Council of Ukraine Oleksiy Danilov on this topic.

“This is Danilov’s personal position.

As far as I know, he did not coordinate this information with anyone.

This is his personal opinion ... Theoretically, if the society has such a need, it can be resolved in a referendum, ”Arahamia said.

The head of the Servant of the People added that now there is no such request in society or a big discussion on this topic.

Earlier, Oleksiy Danilov, in an interview with RBC-Ukraine, said that in terms of government it would be better for Ukraine to be a presidential republic, not a parliamentary-presidential one.

“We need to decide once and for all what kind of country we have.

And then everything is fine with you, ”said the NSDC secretary.

He explained that hopes are pinned on him in the nationwide presidential elections, however, according to the constitution, Ukraine is a parliamentary-presidential republic.

“Then, according to the logic of a parliamentary-presidential republic, the president should be elected in parliament and put an end to this issue.

But the people do not want to be deprived of the right to elect the president ... If you want my personal opinion, I can say.

I am for a tough presidential republic.

Because then there is a responsible person who understands what he is going for, why and so on, ”Danilov said.

According to him, it is difficult to find precedents in Ukrainian history "when without a personality it was possible to make a leap forward."

An RT source in the Ukrainian Cabinet of Ministers says that Zelensky's entourage does not hide: the president wants to get even more powers.

“The President, apparently, likes to resolve issues by phone.

And concentrate power in your hands.

Therefore, opposition TV channels are being closed, unwanted officials are being dismissed.

Zelenskiy understands that if he wins the next presidential election, he will definitely not get a majority in parliament.

And, apparently, until that time he decided to concentrate power in his hands, "- said the interlocutor of RT.

"I don't need any power"

The presidential-parliamentary form of government in Ukraine was established in 1996.

In 2004, after the Verkhovna Rada adopted amendments to the constitution, it was changed to a parliamentary-presidential one.

After the events of 2014, when the government in Ukraine changed as a result of a coup, the form of government was once again changed to a parliamentary-presidential one.

In June this year, in an interview with the media, Volodymyr Zelenskyy said that a de facto presidential-parliamentary form of government operates in Ukraine.

When choosing a president, Ukrainians want him to be responsible for everything, no matter what, Zelensky explained.

So he commented on the signing of decrees, which put into effect the decisions of the National Security and Defense Council of Ukraine on sanctions against Russian enterprises.

“We came to change the country - so let's change it.

Therefore, everything that I have at hand, all power, is all my weapon, and the NSDC is one of these types of weapons.

And I use it, ”Zelensky summed up.

At the same time, the President of Ukraine noted that if he "must come to an agreement with everyone," then this, frankly speaking, does not suit him.

In early October, Volodymyr Zelenskyy announced that he did not plan to initiate changes to the constitution with the aim of the country's transition to a presidential form of government.

He said this during a briefing in Truskavets following the results of a visiting meeting of the Servant of the People faction.

He also rejected claims that power in Ukraine is concentrated in the hands of the president, and all decisions are made in his office.

“I don't need any power, and from the very beginning.

I came to change what I promised, ”Zelensky said.

At the same time, he noted that when the president, the speaker of the Rada and the prime minister “work from three different teams,” there is “no concentration at all,” and all decisions are made for years.

It is worth noting that Zelensky said this against the background of a conflict with Dmitry Razumkov, who was the speaker of the Rada at that time.

In 2019, Razumkov was the head of the presidential party "Servant of the People" and entered the Rada under the first number of its electoral list.

However, after the speaker of the Rada sent the law on oligarchs for examination by the Venice Commission, despite the protests of the Servant of the People, his party members and Zelensky himself criticized him.

On October 7, the Rada, on the initiative of the Servant of the People, dismissed the speaker of the Ukrainian parliament, Razumkov.

Ukrainian political scientists note that this resignation confirms Zelensky's intention to concentrate power in his hands.

"It is necessary to change the system, not the form"

In Ukraine, the proposal to once again change the form of government to a presidential one was met with skepticism.

For example, former Deputy Prime Minister Pavel Rosenko said that Zelensky does not need additional powers and the strengthening of the presidential vertical.

“I know one thing for sure - conversations about the redistribution of powers between the branches of power, who should transfer what power to whom, begins when the authorities need to find extreme ones in their failures and failure of their activities,” Rosenko stressed.

He recalled that the Servant of the People party has a mono-majority in the Verkhovna Rada, and Zelensky already has full power.

“Today the President of Ukraine has his own parliament, his own government.

All ministers are appointed by him, he is also dismissed.

His National Bank, his prosecutor's office, his SBU.

The president has all the full power today.

Therefore, today it is manipulation - to say that the president lacks some powers to work effectively, ”Rosenko said.

An RT source at the Ministry of Justice of Ukraine believes that the president's team is thus probing public opinion.

And Zelensky, who not so long ago said that he does not hold on to power, has apparently changed his mind, "the interlocutor of RT explained.

In turn, a RT source in the Batkivshchyna party says that the appearance in the public sphere of statements about a change in the form of government in the country indicates that Zelensky is going to take a dangerous path.

“Apparently, the experience of other presidents did not teach him anything.

The political elite and Western partners do not welcome authoritarianism, and no one has canceled the protests of the Ukrainians, ”said the representative of Batkivshchyna.

According to Vladimir Olenchenko, senior researcher at the Center for European Studies at the Institute of World Economy and International Relations of the Russian Academy of Sciences, voicing such ideas suggests that the politicians in power do not have the competence to govern the country.

“Therefore, they are pondering how to monopolize the power.

They fail to build power within the framework of relations of ordinary parliamentary democracy.

In any case, this is a demonstration that the current leaders have not yet shown themselves capable of running the country.

This is an attempt to maneuver to keep a politician like Zelensky in power, who has not yet demonstrated anything, ”the analyst said in an interview with RT.

Arguments about the form of government in Ukraine are another attempt by the current government to absolve themselves of responsibility for their mistakes, Olenchenko said.

“This is an attempt to replace what the political leadership should do, namely, ensuring economic development, the welfare of Ukrainians and the creation of normal diplomatic relations with neighboring countries.

There is no improvement in any of these positions, but rather even a worsening of the situation, ”the expert emphasized.

The efficiency of the state is determined not by the form of government, but by the efficiency and adequacy of the ruling elite, said Rostislav Ishchenko, president of the Center for Systems Analysis and Forecasting, in an interview with RT.

“In Ukraine, the state is in a coma, that is, in fact, the political and administrative structures have been destroyed or are in agony.

Accordingly, thoughts of how to fix this all should be born in the heads of individual politicians.

Usually they go the simplest way and propose to change the form of government.

In fact, it is necessary to change the system, not the form, ”concluded the expert.