"Does not endanger the security of gas supplies to the EU": Germany spoke about the certification of Nord Stream 2

The German Economy Ministry said that the certification of the Nord Stream 2 gas pipeline would not pose a threat to gas supplies to Germany. This was reported based on the results of the analysis carried out by the department, which was preceded by consultations with neighbors from the EU countries. Meanwhile, Ukraine has offered to extend the contract for the transit of Russian gas without waiting for the end of the agreement in 2024. 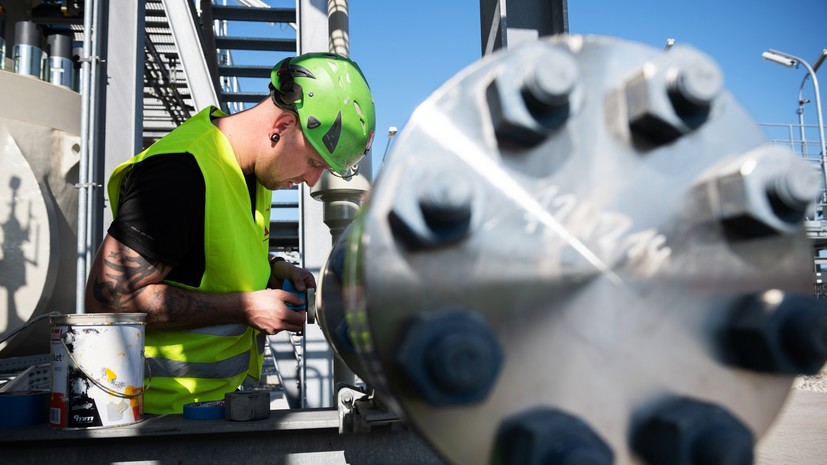 The German Economy Ministry said that certification of the Nord Stream 2 gas pipeline would not pose a threat to gas supplies to Germany.

In its analysis, the department came to the conclusion that the issuance of the certificate "does not jeopardize the security of gas supplies to Germany and the European Union."

The German Ministry of Economy noted that the analysis was preceded by consultations with neighbors from the EU countries.

Estonia, Italy, Latvia, Lithuania, Austria, Poland, Slovakia, the Czech Republic and Hungary were given the opportunity to participate in the consultations, according to the statement.

At the same time, the ministry will continue the certification process and examine other legally necessary regulatory conditions, the statement said.

Earlier, the Bundestag spoke in favor of the earliest possible commissioning of the pipeline due to the high demand for gas.

It should be reminded that the construction of Nord Stream 2 was finally completed on September 10.

The gas pipeline runs from Russia to Germany through the Baltic Sea and the exclusive economic zones and territorial waters of Germany, Denmark, Russia, Finland and Sweden.

In mid-October, the first line of the pipeline was filled with technical gas, the volume of which amounted to about 177 million cubic meters.

Also on russian.rt.com "Reaping the fruits of self-confidence": why Europe continues to accuse Russia of provoking the energy crisis

Earlier, the head of the German company Wintershall Dea, Mario Mehren, during a teleconference with investors, said that he expects to stabilize in the situation with gas prices after the launch of Nord Stream 2 and fuel supplies to Europe.

“Of course, as soon as Nord Stream 2 is launched and Russian gas will be able to come in large quantities from Russian fields, this will stabilize the situation with the supply on the gas market,” Meren quotes TASS.

According to him, additional gas is urgently needed to achieve the "climate goals".

A day earlier, German Ambassador to Russia Geza Andreas von Geir said that the certification of the Nord Stream 2 gas pipeline must pass "legitimately and cleanly" for its commissioning.

According to him, from a technical point of view, Nord Stream 2 has been completed, and now there is a question of certification of the pipeline.

“When the procedure is completed, then it will be possible to talk about the acceptance of Nord Stream 2 into operation,” the ambassador said in response to a question when the German regulator will allow supplies via Nord Stream 2.

Transit of Russian gas through Ukraine

At the same time, the head of the Ukrainian GTS Operator, Serhiy Makogon, said that the Ukrainian side had offered Russia to extend the gas transit contract.

Recall that on December 30, 2019, a contract was signed between Gazprom and Naftogaz of Ukraine for the transit of Russian gas.

“We persistently suggest, if the American and German sides are interested, to extend the transit contract now - without waiting for 2024.

There is an opportunity, ”he said in an interview with TSN.

According to Makogon, Russia has not yet responded to this proposal.

It should be noted that earlier, the Ukrainian GTS Operator submitted an application to the German energy regulator to participate in the Nord Stream 2 certification procedure.

Makogon added that the Ukrainian side is ready "even today" to sign a contract for the next 10-15 years with a transit volume of at least 45 billion cubic meters.

In addition, Makogon noted that to date, the Ukrainian gas transmission system (GTS) has lost about 4.5 billion cubic meters.

m from the gas agreement between Russia and Hungary.

On October 1, a new long-term gas supply agreement between Moscow and Budapest came into effect.

“We have lost about 4.5 billion cubic meters.

m of transit for sure, but there is a risk of loss of up to 10 billion cubic meters.

m in this direction.

And the possibility of gas import by virtual reverse from Hungary is under threat, ”Makogon said in an interview with TSN.

Recall that in October, Vladimir Putin spoke about the prospects for increasing the volume of gas pumped through the Ukrainian territory.

According to him, this is possible subject to the observance of economic and technological conditions.

At the same time, the Russian leader warned that a further increase in the volume of supplies is fraught with risks against the background of the deterioration of the Ukrainian gas transportation system.

The President cited data according to which this figure exceeds 80%.

“Everyone is hinting to us: increase more supplies through Ukraine.

It is dangerous to increase, the GTS has not been repaired there for decades, maybe if you increase the pressure, it will burst altogether, Europe will completely lose this route, ”the President said during his speech at the plenary session of the Russian Energy Week forum.