Vaccino, Locatelli: "Possible second heterologous dose for those who did Johnson &amp; Johnson"

"The evidence tells us that the third dose is certainly recommended for people who have connotations of frailty or for reasons of age or concomitant pathologies. I would call this additional dose for immunosuppressed subjects" explains the President of the Superior Health Council. 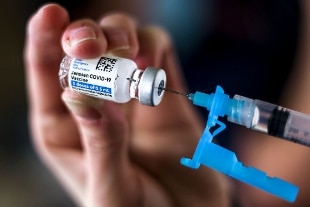 25 October 2021 Franco Locatelli, president of the Superior Health Council, spoke last night at Che tempo che fa on Rai3 on the possibility of giving a second dose to those who have given the Johnson & Johnson vaccine: "It is a viral vector vaccine, such as Astra Zeneca, which has been approved by regulatory agencies for a single single-dose administration. Now there is news of a review process by the FDA - there will surely be later by the EMA as well. if there were indications on the possibility of administering a second dose with a messenger RNA vaccine, it would have the advantage of inducing an even better immunological response.These people will be called, there is a very precise vaccination registry.Administering over two months does not compromise efficacy. As soon as the indications from the regulatory agencies arrive, everything will be done quickly ".

And he adds: "The evidence tells us that the third dose is certainly recommended for people who have connotations of frailty or for reasons of age or concomitant pathologies. This I would call additional dose for immunosuppressed subjects. We have evidence that with the third dose, half of those who had no answers, because they were taking immunosuppressive therapy to prevent rejection in the event of an organ transplant, then reacted better ", at the moment" there is a booking system widely available for the over 60s, then there is over time we will also consider the possibility for the youngest ". He also highlights: "The closer we get to returning to normal, the more we think we will all come out of it together.We cannot ignore the problem that in some countries the percentage of vaccinated people does not even reach double digits: there we must help. The pandemic emerges with two values: that of knowledge and that of solidarity ".

Obligation if there are extremes

"The Italian situation is far more favorable than that of other countries, even compared to Germany, in terms of viral circulation. All this did not happen by chance: it is the result of one of the highest percentages of vaccinated subjects in the vaccinable population. Also because we had a gradual reopening. When technicians stressed the importance of graduality, it was not to negatively impact the lives of Italians, but to avoid risks. Finally, it is important to maintain the measures not pharmacological: mask, hand washing and distancing. All things that in the United Kingdom have been abandoned "underlines Locatelli.

"We had suggested more gradual openings, then the policy decided to make different choices - he added -. At the moment the numbers say that we have not paid a price for these reopening". Then he points out that "vaccine and swab are not the same thing, the same duration of the Green Pass obtained from these in fact differs. The swab gives an instant photograph whose validity has a very limited duration, 48-72 hours. All this is only needed. to say that at that moment that subject has a low probability of being contagious. Those few subjects who become infected after being vaccinated have a much lower contagious capacity. We started with a policy of conviction that has largely breached and permeated the conscience of many citizens.

If there were the extremes, it could be considered the obligation "," I first heard the secretary Letta who made the appeal to get vaccinated and I do too: it is true that 86% of people are covered by at least one dose, 82% with two doses and in the over 70 age group we go above 90%, but people who are missing must learn to love each other, because getting vaccinated means this and also loving others ". And he reiterates that the vaccine it is not the "fruit of a sudden scientific discovery or of shortened validation paths or skipped steps. RNA vaccines had been working for some time, they were in development for HIV infections, rabies virus and even influenza viruses. It should be clearly emphasized that this is the safest vaccine we have available.What we could define as 'uncontrolled infodemic', the dissemination of false news and without scientific basis, did not help the reassurance profile ".

"On the day Pfizer announced a 91% effective vaccine, the Food and Drug Administration - a third-party regulatory agency - made it clear that the benefits of immunization far outweigh any potential risk. We remind you that for the 5-11 year age group, in a study on 2000 subjects, a dose of one third of what we received was used "explained the president of the Superior Health Council. regarding the vaccine for children between 5-11 years.