Two days for vaccination: Putin instructed to provide working Russians with a weekend to get vaccinated against COVID-19

Russian President Vladimir Putin approved instructions on the introduction of measures necessary to combat the spread of coronavirus infection. So, the head of state ordered to ensure the provision of two days off for vaccination against COVID-19, to introduce self-isolation for the elderly and people with chronic diseases. He also recommended banning recreational activities and limiting the work of catering establishments at night. Meanwhile, Moscow reported that they do not plan to extend the non-working days after November 7, while St. Petersburg stressed that coronavirus restrictions in the city will be in effect until herd immunity is attained at a level of at least 80%. At the same time, checkpoints will be set up in Sevastopol from October 30 in order not to let tourists who do not have QR codes into the city. 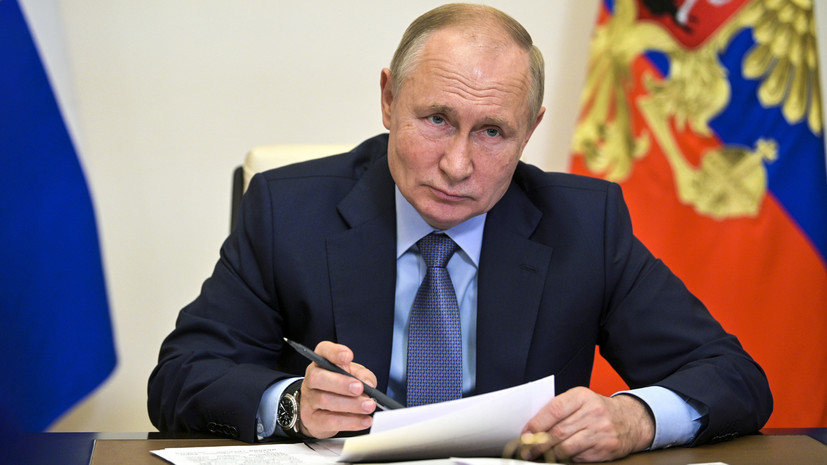 On Monday, October 25, Russian President Vladimir Putin approved a list of instructions following a meeting with members of the government on October 20.

According to the document, the president instructed the heads of the constituent entities of the Russian Federation, together with the heads of organizations and enterprises, to ensure the implementation of recommendations for providing working Russians with two paid days off for vaccination against coronavirus infection.

The head of state instructed the government, together with the regional authorities and the parties of social partnership, to adopt and implement the relevant recommendations.

A report on this topic should be submitted by November 15, then - monthly.

In addition, the heads of the regions were recommended to introduce self-isolation for citizens over 60 years old who have not yet been vaccinated against COVID-19, and to transfer them to a distance, a similar measure also applies to people with chronic diseases.

It is noted that this must be done within four weeks for vaccination (in the absence of medical contraindications) and the formation of immunity.

In addition, the governors were instructed to strengthen control over citizens' observance of the mask regime and social distance, sanitary and epidemiological measures on all types of transport.

Also, Vladimir Putin instructed the government to attract the forces and funds of the Ministry of Defense and the Ministry of Emergencies to help regions in which a difficult situation with the spread of COVID-19 is developing.

The Cabinet of Ministers must also purchase and deliver expensive medicines to the regions, which are necessary for the treatment of patients with COVID-19.

Another instruction concerns a multiple increase in the volume of testing of the population, including the use of express tests.

Another recommendation from the president concerns a ban on the operation of catering establishments and holding mass entertainment events at night (from 23:00 to 06:00).

A report on this topic will have to be prepared by the heads of the constituent entities of the Russian Federation and the head of Rospotrebnadzor Anna Popova until November 30, and then report on a monthly basis.

Recall that on October 20, Vladimir Putin, at a meeting with members of the government, supported the proposal of the Cabinet of Ministers to declare non-working days throughout the country with the preservation of wages from October 30 to November 7 inclusive.

On Monday, October 25, an operational meeting of Prime Minister Mikhail Mishustin with his deputies took place.

On the agenda, in particular, was the issue of supporting business in the face of an increase in the incidence of COVID-19.

The prime minister recalled that last week the president approved the relevant proposals.

“We must not only help preserve jobs, but also provide an opportunity to quickly restore momentum after the new wave begins to decline,” he stressed.

Thus, a draft of the first decree has already been prepared, within the framework of which it is envisaged to allocate a lump sum payment in the form of a grant, which can be received by socially oriented NGOs, as well as small and medium-sized enterprises from among the most affected industries.

According to Mishustin, the amount of the grant will be calculated based on one minimum wage for each employee.

“The total amount of such support will be about 38.5 billion rubles.

We expect that such a measure will allow the affected enterprises to partially cover the loss of revenue and support about 3 million people.

Businesses will be able to apply for grants remotely within a month and a half - starting from November 1 of this year, ”Mishustin explained.

He also said that from December 1, an experiment is expected to be launched to form a unified system that will allow small and medium-sized businesses, self-employed, to gain access to all government support measures and demanded commercial services.

“The experiment will help to debug a new service of all tools for receiving and processing information from various sources, as well as targeted selection of services and remote services for entrepreneurs.

The main thing is to bring the quality to a high level, ”the prime minister said.

The situation with COVID-19 in the regions

The capital's headquarters reported that the city authorities had no plans to extend the non-working day regime in Moscow after November 7.

As a reminder, the non-working days in Moscow will come into force on October 28.

At the same time, from today in the capital, measures began to take effect, obliging employers to transfer at least 30% of employees to a remote mode of work, while elderly Muscovites and people with chronic diseases were obliged to observe a home regime.

"The complex of measures introduced should help slow down the spread of the infection," the headquarters explained.

At the same time, the head of the epidemiological surveillance department of the Federal Service for Supervision of Consumer Rights Protection and Human Welfare in St. Petersburg, Irina Chkhinzheriya, said that coronavirus restrictions in the city will be in effect until herd immunity reaches at least 80%.

“We need to calmly, without panic, accept this as a necessary measure.

And this vaccination will be carried out annually in the future, as it is done with the flu.

We have no other way if we do not want the limitations that we are now discussing.

We have to live an ordinary life.

And such a condition will be the achievement of collective immunity, ”she said.

From October 30, checkpoints will be set up at the entrances to Sevastopol in order to prevent tourists from entering the city without QR codes about vaccinations or previous COVID-19 disease.

Governor Mikhail Razvozhaev said that this technology was being tested last year.

He noted that many people want to come to Sevastopol during non-working days, but they must understand that this regime is being introduced to change the epidemiological situation.

“Although it was reported that booking cancellations have begun, unfortunately, there are people who perceive these days off not as a means and an opportunity to stay at home so that the country will switch a little from this wave (the increase in the incidence of COVID-19), but as a weekend days they plan their vacations, trips are different, including to the peninsula and to Sevastopol, "the agency" Kryminform "quotes him.

In the Kaliningrad region, the Rospotrebnadzor department advocated the introduction of tough anti-epidemic measures, since the current forecast for the development of the epidemic situation is “extremely unfavorable”.

“All these measures are aimed at limiting contacts,” said the head of the regional department, Elena Babura.

At the same time, in the Lipetsk region, from October 25, a ban was introduced for all citizens, including minors, to visit shopping and entertainment centers and all non-food stores, restaurants and cafes, beauty salons, baths, swimming pools, sports centers, cultural institutions without showing QR codes ...

“We are not planning to introduce a lockdown, given that we are taking such tough measures to protect our citizens from the virus.

In addition, we have increased the staff of doctors, the number of necessary equipment and hospitals for the sick, ”said Governor Igor Artamonov.