The UAE confirmed that it is closely following the recent developments in the sisterly Republic of Sudan, calling for calm and avoiding escalation, and its keenness on stability and as soon as possible, in a manner that achieves the interest and aspirations of the Sudanese people for development and prosperity. 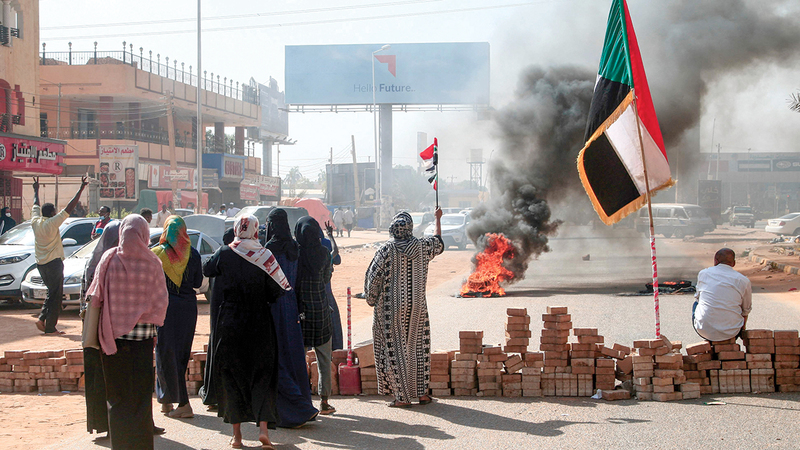 The UAE confirmed that it is closely following the recent developments in the sisterly Republic of Sudan, calling for calm and avoiding escalation, and its keenness on stability and as soon as possible, in a manner that achieves the interest and aspirations of the Sudanese people for development and prosperity.

The Ministry of Foreign Affairs and International Cooperation stressed the need to preserve the political and economic gains that have been achieved and all that aims to protect the sovereignty and unity of Sudan, stressing its support for the brotherly Sudanese people.

Yesterday, the Sudanese army announced the dissolution of the transitional institutions, the declaration of a state of emergency and the formation of a new government, while civilians condemned the measures, after the arrest of government officials and politicians.

General Abdel-Fattah Al-Burhan, who headed the Sovereignty Council, said in a speech carried by Sudanese television that "the army took steps that preserve the goals of the December 2018 revolution that overthrew the regime of Omar al-Bashir," speaking of "correcting the revolution."

Despite declaring a “suspension of work” on several articles of the “constitutional document” that was reached between the military and civilians who led the protests against al-Bashir in 2019, he said he adhered to them, and to “complete the democratic transition until the state leadership is handed over to a civilian government.”

Al-Burhan also announced that "a government of independent national competencies will be formed to run the country's affairs until the power is handed over to an elected government."

At the same time, demonstrators in a number of Khartoum streets were condemning the move.

The United Nations, several countries, the Arab League and the African Union called for respecting the transitional process and dialogue between the military and civilians who have been sharing power since August 2019.

Yesterday, the Ministry of Information announced that "a force from the army has arrested Prime Minister Abdullah Hamdok." She stated that "military forces" arrested most of the cabinet members and civilians from the Sovereignty Council. Hamdok's office said in a statement: "What happened represents a disruption of the constitutional document." He held "the military leaders of the Sudanese state fully responsible for the life and safety of Prime Minister Hamdok and his family." The statement called on the "Sudanese people to come out and demonstrate and use all peaceful means to restore their revolution," while the country's internet has been cut off, and it is very difficult to make phone calls.

The Ministry of Information announced that "joint military forces stormed the radio and television headquarters in Omdurman," the twin city of Khartoum, and detained a number of workers.

The Sudanese Professionals Association, one of the main drivers of the uprising that toppled Omar al-Bashir in 2019, rejected the arrests.

The Medical Syndicate and the Syndicate of Banks also called for civil disobedience.

Demonstrators in some parts of Khartoum blocked roads and burned tires in protest.

While the army cut bridges linking Khartoum with the neighboring areas.

"We will not accept military rule, and we are ready to give our lives until the democratic transition takes place in Sudan," said protester Haitham Mohamed, who took to the street.

"We will not leave the street until the civilian government and the transitional process return," said the protester, Sawsan Bashir. In April 2019, the Sudanese army overthrew the regime of Omar al-Bashir, who ruled Sudan for more than 30 years, after a massive popular uprising that lasted for months, and took power. However, the popular protests continued to demand civilian authority, and during that period there were unrest and the violent dispersal of a sit-in, during which there were deaths and injuries.

In August 2019, the military and civilians (the Coalition of Forces for Freedom and Change), who were leading the protest movement, signed a power-sharing agreement that provided for a three-year transitional period that was later extended.

Under the agreement, an executive authority was formed from both parties (a Sovereignty Council headed by a military, and a government headed by a civilian), provided that the rule is handed over to a civilian authority following free elections at the end of the transitional period.

There was a coup attempt in September that was thwarted, but officials said that there was a major crisis at the level of power.

As a result, the divisions within the authority emerged into the open, especially between the military and civilians.

• Al-Burhan affirmed that a government of independent national competencies will be formed to manage the country's affairs until power is handed over to an elected government.

Invitations to return to the dialogue

/ The Representative of the United Nations Secretary-General in Sudan, Volker Peretz, said that he was "very concerned about reports of attempts to undermine the political transition process in Sudan," and considered that "the prolonged arrests, according to what was reported to the Prime Minister, government officials and politicians, are unacceptable." He called for their "immediate release" and "urged all parties to immediately return to dialogue and participate in good faith to restore constitutional order."

Washington's special envoy for the Horn of Africa, Jeffrey Feltman, said in a statement on the social networking site "Twitter": "The United States is deeply concerned about reports of the military's control of the transitional government," noting that this "contradicts the constitutional declaration that defines the framework of the transitional process." and aspirations of the Sudanese people for democracy.

French President Emmanuel Macron called for "respect for the position of the prime minister and civic leaders".

The African Union called for "immediate" talks between the military and civilians.