The color of the Arctic artillery: what are the new self-propelled guns capable of for the Russian army in the Arctic

In the near future, the Russian defense industry will complete the development of a number of models of highly mobile artillery and mortar weapons. This was reported on the website of the Ministry of Defense of the Russian Federation. According to the military department, the new strike systems are adapted for operations in the Arctic. Among them are the 152-mm self-propelled gun "Malva", the 120-mm artillery complex "Phlox" and the 82-mm mobile mortar "Drok". All these weapons systems are being created by order of the RF Ministry of Defense and will soon go to state tests. According to experts, their appearance in the arsenal of ground units in the Arctic will strengthen the defense potential of Russia. 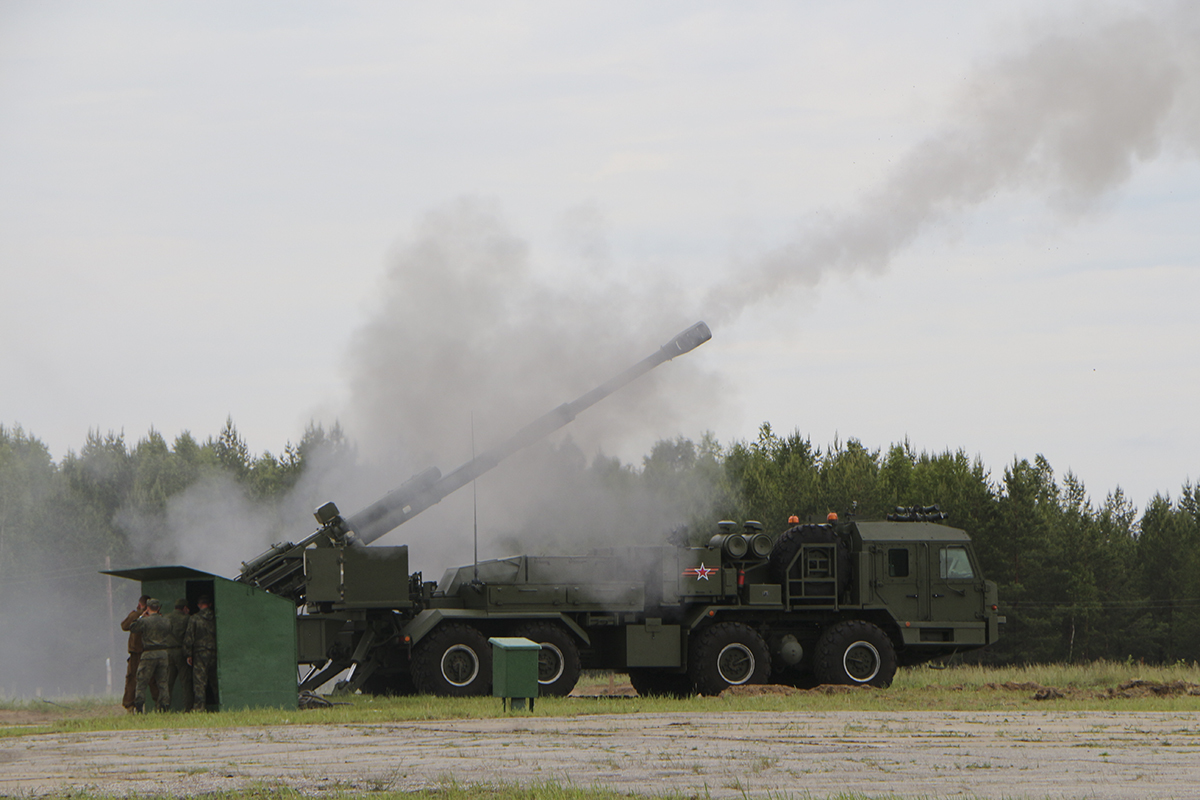 In Russia, the development of a line of new types of military equipment is being completed, which will strengthen the power of the ground forces, including the Arctic units, the press service of the Russian Defense Ministry reports.

In particular, the domestic defense industry is completing the creation of samples of highly mobile artillery and mortar weapons.

As clarified in the Ministry of Defense of the Russian Federation, the ground forces have recently been strengthened thanks to the supply of medium-caliber multiple launch rocket systems (MLRS) "Tornado-G" (modernized "Grads"), improved 152-mm self-propelled howitzers "Msta-S" and mobile anti-tank missile systems "Chrysanthemum-S".

"The whole range of weapons"

According to the Ministry of Defense of the Russian Federation, the logic of the development of the Arctic grouping of the Russian Armed Forces takes into account current military threats, including the increase in the number of troops of Western states in high latitudes.

The Russian military does not exclude the possibility of provocations, sabotage and large-scale aggression by the United States and its allies in the Arctic.

The Northern Fleet is responsible for the defense and security of the Russian Arctic.

In April of this year, the 14th Army Corps was formed in its structure, the number of which, presumably, can reach several tens of thousands of servicemen.

In the first half of September, units of the 14th Army Corps conducted a major exercise on the Kola Peninsula.

His scenario provided for the counteraction and defeat of the ground forces and amphibious assault forces of the enemy, which invaded the Russian Arctic.

During the maneuvers, the methods of conducting the defense were worked out when repelling the blow of the enemy, who tried to go on the offensive.

Also, the servicemen successfully completed the tasks of encircling and eliminating the conditional aggressor.

According to the press service of the Northern Fleet, during the exercise "modern weapons of warfare" were used.

In an interview with RT, military observer, retired colonel Viktor Baranets, noted the importance of updating the military equipment of the ground units of the Northern Fleet.

It is for this purpose, according to the expert, that the strike systems in service are being improved, and new types of weapons are being developed, including the Malva, Phlox and Drok.

“Russia is quite serious about ensuring that it has the entire range of weapons necessary to protect the Arctic, this also applies to equipping ground forces with new equipment,” Baranets explained.

The development of "flower" self-propelled artillery guns "Malva", "Phlox" and "Drok" is carried out by order of the Ministry of Defense of the Russian Federation as part of the development work called "Sketch".

In June, at the Smolino training ground (Nizhny Novgorod region), these artillery systems and a number of other types of military equipment were demonstrated to the Commander-in-Chief of the RF Ground Forces Oleg Salyukov and Deputy Defense Minister of Russia Alexei Krivoruchko.

Based on the results of the inspection, the Deputy Head of the RF Defense Ministry highly appreciated the capabilities of the new products of the Russian defense industry.

“The equipment being developed generally meets modern requirements, and the troops expect it in the near future.

The presented samples are superior to the existing ones in a number of basic tactical and technical characteristics, ”the press service of the RF Ministry of Defense quotes Krivoruchko.

The Malva is a 2A64 howitzer mounted on a BAZ-6010-027 all-terrain chassis with an 8 × 8 wheel arrangement. The self-propelled gun is equipped with the same artillery gun as the Msta-S.

The Malva's firing range is 24.5 km, the ammunition load is 30 rounds, the rate of fire is seven rounds per minute, and the weight at full load is 32 tons.

Earlier in the USSR and Russia, large-caliber wheeled self-propelled guns were practically not produced.

Thus, the "Malva" is an artillery system atypical for the domestic armed forces.

For such an unusual appearance, she received the nickname "howitzer-convertible" in the media.

By the end of this year, the prototype "Malva" should complete acceptance tests, and then go to state tests, the successful completion of which will allow the installation to be adopted by the army.

As military expert Alexei Khlopotov said in a commentary to RT, the wheeled chassis gives the Malva a number of significant advantages in the Arctic.

In particular, the relatively modest dimensions and weight allow it to be transferred by heavy military transport aircraft of the Aerospace Forces.

This quality is of great importance due to the gigantic size of the Russian territory, the analyst explained.

“In comparison with tracked models, wheeled vehicles, including self-propelled artillery, are distinguished by better maneuverability, maintainability and ease of operation.

In terms of geography, wheeled vehicles also greatly benefit, since the nature of modern conflicts dictates the need to be ready to carry out expeditionary missions, that is, to transfer troops and equipment over long distances, ”Khlopotov said.

"In conditions of ultra-low temperatures"

In addition to "Malva", the domestic self-propelled gun "Phlox" is at the final stage of testing.

Its serial production will be deployed at the facilities of Uralvagonzavod after the completion of state tests at the end of next year or at the beginning of 2023.

The prototype "Phlox" was created on the basis of an armored modification of the Ural-4320 truck with a 6 × 6 wheel arrangement, which is widespread among the troops.

The complex is equipped with a combined semi-automatic rifled gun, which is capable of hitting targets with both mines and artillery ammunition of 120 mm caliber with ready-made rifling (such projectiles ensure the stability of the initial velocity after departure and increase the barrel resource).

In a caliber similar to the "Phlox", the Russian industry is developing the Magnolia self-propelled artillery mount.

It is mounted on a tracked platform and adapted for operation in difficult terrain, including the Arctic.

The Magnolia complex is a fighting compartment with a 120-mm 2A80 rifled semi-automatic cannon.

It is transported by a two-link tracked all-terrain vehicle DT-10PM "Vityaz" with a 800 hp diesel engine.

The design of the turret of the Magnolia fighting compartment allows for circular horizontal aiming and raising the gun barrel at an angle from -5 ° to + 80 °.

The self-propelled gun's rate of fire is ten rounds per minute, the ammunition load is 80 rounds.

From the class of mortar weapons, the Arctic ground units should soon receive the 2S41 Drok mobile complex.

The peculiarity of this type of equipment lies in the fact that the designers of the "Petrel" installed a combat module with an 82-mm gun on the newest armored vehicle "Typhoon-VDV".

"Drok" is capable of conducting targeted artillery fire at a distance of up to 6 km.

The loading and aiming of the weapon is carried out by the crew inside the vehicle.

If necessary, military personnel can dismantle the mortar and fire from the ground.

"The new highly mobile artillery weapon of the airborne assault will fire conventional and new, with an increased firing range and power of mines from the fighting compartment of the vehicle, which provides for the possibility of taking out a mortar and firing from the ground," the materials of the Russian Ministry of Defense say.

According to Viktor Barantz, when developing new artillery and mortar systems, Russian specialists take into account the fact that combat work in high latitudes has a number of important features.

“In extremely low temperatures, artillery works differently, not as usual.

Here we need another gunpowder and other aiming systems.

But, as I think, all these nuances, of course, are taken into account by our engineers and designers, who are now completing the development of a whole line of artillery weapons for the needs of our Arctic group, "Baranets summed up.