Smuggled in live salamanders - see the pictures from the attack

A large number of live reptiles, salamanders and frogs were sent from abroad - packaged so that customs would never detect anything. After alarms from the USA, the police found the amphibious smuggler. A man accused of a serious smuggling crime is now on trial. 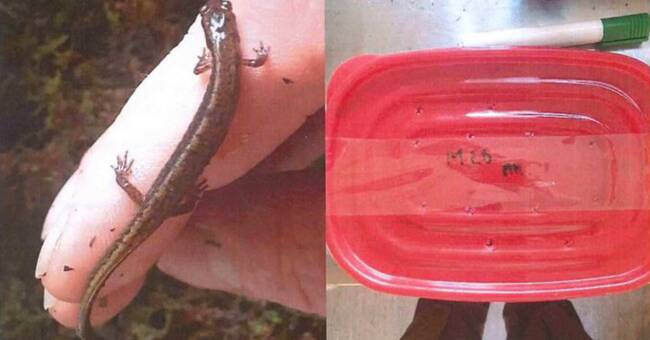 The man has just picked up a postal package with what he believes contains 55 salamanders at the grocery store in Åkarp when the police show up.

What he does not know is that the package - marked with the content "handmade figurines" - has already been emptied by customs at Arlanda.

When the man starts to open his smuggled amphibious delivery from the USA, they strike.

The United States is sounding the alarm

It is initially American authorities who alert about the man's suspicious activities, after discovering that a package of live reptiles is on its way to Sweden.

On Monday, a trial in the current case will be held at Malmö District Court.

The man from Skåne has been charged with a total of nine serious smuggling offenses - all are cases where live reptiles, salamanders and occasional frogs and toads were sent to him from Belgium, Canada, China and Japan between 2017 and 2019.

The procedure has been ingenious - a shipment of toads and frogs from Japan was said to contain cake decorations.

Another package was sent from Canada and was stated to contain glass.

The man, who also sold and mediated salamanders himself, is also said to have sent packages of animals abroad.

When he was finally arrested, the police also found a large collection of animals in an old stable in Staffanstorp.

During a visit, the County Administrative Board's animal welfare inspector stated that 500-1,000 animals were stored in the premises - in aquariums without a pump and in partially dirty plastic boxes stacked on top of each other.

Some animals had escaped and lived freely in the room, and a large number of dead snakes were also found in a freezer, according to the police's preliminary investigation report.

During the preliminary investigation, the man has been very secretive, and initially he neither admitted nor denied the crime.

- Now he has written to the district court and admitted all crimes, but does not think they should be judged as serious, says Christer Jarlås.

The trial will begin after the turn of the year.