Poland, the premier: "If the EU starts war, ready to defend us with all available weapons" 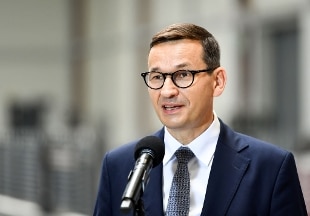 October 25, 2021If the European Commission "starts the Third World War" on the subject of respect for the rule of law, Poland will "defend itself" with "all weapons at its disposal". Polish Prime Minister Mateusz Morawiecki said in an interview with the Financial Times. The head of the government in Warsaw accused the EU of making demands on Poland with a "gun to the head" and urged Brussels to withdraw the threats of legal and financial penalties.

"What will happen if the European Commission starts World War III? If they start World War III, we will defend our rights with all the weapons at our disposal," Morawiecki said when asked if Poland could veto critical decisions on legislation such as the EU climate package.

"If someone attacks us in a completely unfair way, we will defend ourselves in every possible way", insisted the Polish premier.

"We believe this is already a discriminatory approach and a kind of diktat. But if it gets worse, we will have to think about our strategy."