His Highness Sheikh Mohammed bin Rashid Al Maktoum, Vice President and Prime Minister of the UAE and Ruler of Dubai, stressed that the space technology and research sector has become a major component of the comprehensive development system in the UAE, because of its influential value in supporting the country's ambitious development trends. 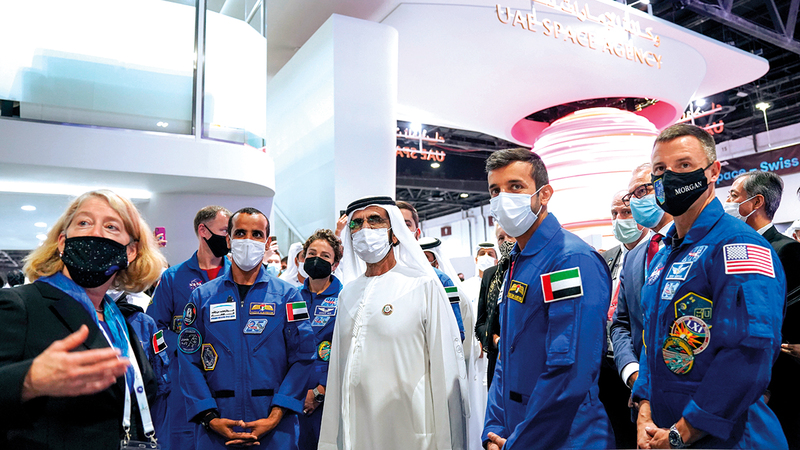 Visited the exhibition accompanying the International Space Conference in Dubai

His Highness Sheikh Mohammed bin Rashid Al Maktoum, Vice President and Prime Minister of the UAE and Ruler of Dubai, stressed that the space technology and research sector has become a major component of the comprehensive development system in the UAE, because of its influential value in supporting the country's ambitious development trends, and what It qualifies him with unprecedented opportunities for excellence, with the state achieving qualitative achievements, confirming that it is on the right path with confident steps towards consolidating its growing position in the international space club.

His Highness noted the importance of the sector and the hope for its development in the UAE. His Highness said: "We hold great ambitions for the space sector to support our knowledge economy and push sustainable development to serve our people, our region and the world and a better future for future generations. We seek to achieve new achievements in the space field, with strong global partnerships. With the largest specialized scientific institutions and bodies, and creative young national energies, they have proven their worth to assume the responsibility of making the future along with experts who have a long history in the field.. We have reached Mars.. We will go to Venus.. We will not stop raising the ceiling of ambition to higher levels, reaching To everything that serves man and ensures his happiness in the present and the future.

This came during His Highness' visit to the exhibition accompanying the International Space Conference, which started its 72nd session the day before yesterday in Dubai, with the participation of delegations from 110 countries, more than 4,000 participants, and 350 young professionals in the sector and space experts from all over the world. The largest of its kind in the world, to be held at the Dubai International Exhibition Center, and hosted by the "Mohammed Bin Rashid Space Center", in cooperation with the International Astronautical Federation, under the slogan "Inspiration, innovation, and discovery for the benefit of humanity", in the first meeting of the most important event in the world in the Arab region .

His Highness toured the exhibition, which includes 90 exhibitors, including space agencies, institutions specialized in the same field, and space technology companies from around the world. Which the authority seeks to achieve through its participation in this major event hosted by Dubai for the first time in the Arab region, including reviewing the authority’s role in supporting innovation and development in the space sector in the sisterly Kingdom of Saudi Arabia, and highlighting its future plans for the growing system of the space sector.

His Highness Sheikh Mohammed bin Rashid Al Maktoum stopped at the platforms of the most prominent international space agencies participating in the exhibition, which have a long history in the field of space sciences and discoveries, and included the Russian Space Agency (Roscosmos), the US Space Agency (NASA), and the European Space Agency (ESA). and Ispace, in addition to Lockheed Martin's platform, a pioneer in the field of aeronautics and astronautics.

During the visit, His Highness was briefed on the innovations and advanced technology presented by international space agencies and institutions, through the exhibition accompanying the 72nd International Space Conference, in the field of space exploration. It would create a clearer and more comprehensive understanding of the universe around us, and help improve the quality of human life on Earth.

His Highness exchanged talks during the visit with the leaders of major space agencies and companies participating in the exhibition about strengthening partnership and cooperation relations during the next stage, expanding the exchange of visits and training programs for Emirati astronauts, and how to benefit from the advanced experiences of international agencies in activating more frameworks and courses of inter-cooperation, including It supports the National Space Strategy 2030, and promotes the ambitious plans of the UAE in this field, in the short and long term.

His Highness was accompanied during the visit by Minister of Cabinet Affairs, Mohammed bin Abdullah Al Gergawi, Vice President of the Mohammed bin Rashid Space Center, Lieutenant-General Talal Belhoul Al Falasi, Chairman of the Board of Directors of the Center, Hamad Obaid Al Mansouri, Director General of the Center, Yousef Hamad Al Shaibani, and two Emirati astronauts, Hazza Al Mansouri. and Sultan Al Neyadi, in addition to the graduates of the second batch of the UAE Astronaut Program, Noura Al Matrooshi and Mohammed Al Mulla.

• “We place great ambitions on the space sector to support our knowledge economy and push sustainable development to serve our people, our region and the world.”

• “We seek new achievements in the field of space with strong global partnerships and creative national energies that have proven their worth assuming the responsibility of creating the future.”

• "The state is on the right path with confident steps towards consolidating its growing position in the international space club."

His Highness Sheikh Mohammed bin Rashid Al Maktoum, Vice President and Prime Minister of the UAE and Ruler of Dubai, expressed his appreciation for the great efforts made by global space agencies, which contribute in an influential way to improving the quality of human life through the innovations, concepts and frameworks that they develop in the light of their research and quality projects. Through which humanity is taking successive steps towards the future, with a deeper understanding and a more comprehensive awareness of the discoveries that can be reached in the vast space surrounding the planet Earth to serve humanity, and to prepare a better future for future generations.

The future of Mars

The International Space Conference will discuss a number of important topics, including the future of Mars, sampling missions, the role of emerging space agencies, small satellites that carry out missions to solve climate problems, innovative space solutions for search and rescue, critical applications, and social responsibility in the space sector, while providing The integrated technical program presented a large number of presentations by a committee selected to be supervised by the International Astronautical Federation, in addition to the presentation of more than 2,300 research and scientific papers from more than 86 countries.