Erdogan backs off and does not expel the 10 ambassadors. But "be more cautious" 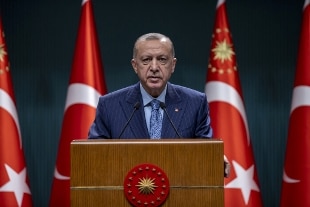 October 25, 2021 Turkey will not expel ten Western diplomats who had asked to release human rights defender Osman Kavala. "There has been another declaration from these ambassadors citing their commitment to Article 41 of the Vienna Convention and I believe they will now be more cautious." This was announced by the Turkish president, Recep Tayyip Erdogan, after having called the declaration of October 18 by the ten diplomats "unacceptable", without therefore following up the threat to expel them.

This is how the diplomatic crisis triggered by the announcement by Turkish President Recep Tayyp Erdogan that he wants to expel the ten Western ambassadors seems to have been resolved with messages on Twitter.

Today the US Embassy in Ankara tweeted this short message: "In response to questions regarding the Declaration of 18 October, the United States notes the maintenance of compliance with Article 41 of the Vienna Convention on Diplomatic Relations."

Canada, New Zealand and the Netherlands posted virtually the same message, while France and Germany retweeted the American tweet.

Article 41 specifies that diplomats must not interfere in the internal affairs of the state in which they are based. The tweets appear to have allayed Erdogan's irritation, who threatened to expel ambassadors from the United States, Germany, Canada, Denmark, Finland, France, Holland, New Zealand, Norway and Sweden. The Turkish state news agency Anadolu tweeted: "The US embassy in Ankara has given up." Then he reported that Erdogan liked Western tweets.

"It is not our intention to create a diplomatic crisis. Those who criticize us from now on will be more attentive. In the last period our country has been the subject of unacceptable attacks and observations. Nobody can give orders to our judicial system and it is our duty. give an adequate response. The Constitution establishes the independence of the judicial system and what some have said is an insult to our judges, lawyers and magistrates ", said the Turkish president.