An opportunity for committed only.. Prepare to study and graduate in half an hour

A journey of imagination in a charming “campus” An opportunity for committed only.. Prepare to study and graduate in half an hour "Committed Graduates" on the swings at the end of the ceremony. Photography: Youssef Al Harmoudi picture Many ideas and images come to mind when you hear the word "Germany". The synonym of the name is: seriousness, accuracy, professionalism, dazzling, quality, scienc 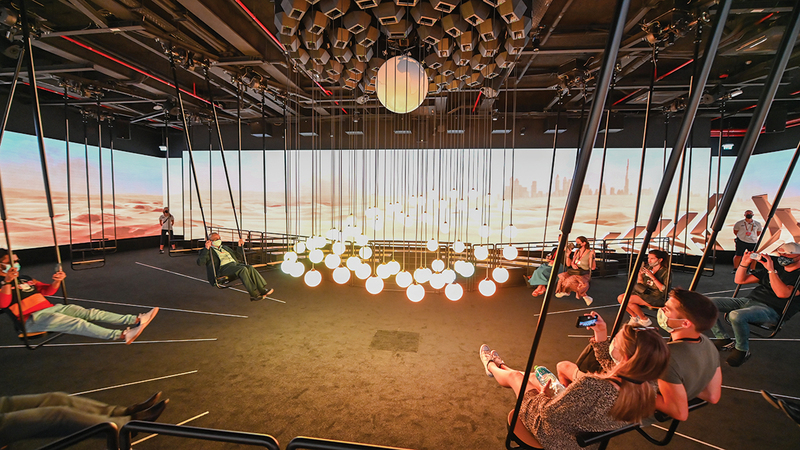 A journey of imagination in a charming “campus”

An opportunity for committed only.. Prepare to study and graduate in half an hour

Many ideas and images come to mind when you hear the word "Germany". The synonym of the name is: seriousness, accuracy, professionalism, dazzling, quality, science and excellence... All these values ​​and others meet at the German pavilion at Expo 2020 Dubai.

“It is a charming suite.” On this phrase, visitors agree that they ended their trip in the suite that bears the name “German Campus,” and it is, in fact, as the university reduces the study to it for only half an hour, so that its pioneers graduate from an impressive and interesting educational path, which cannot be seen. One is only in the «Expo Dubai».

The forum or the German campus relies on an exciting interactive system to engage visitors in the journey inside the forum, which is divided into a number of laboratories: the Energy Laboratory, the Future City, and the Biodiversity Laboratory. Amazing.

Before entering, each visitor must register his name, to be printed on a smart card connected to the interactive system inside the suite, to find his name above the walls, and become part of the journey as if he participated in its design. A golden plastic ball, in which children and adults swim in an entertaining and enthusiastic atmosphere, but the visitor discovers that the balls are not only for entertainment, but each of them carries a distinctive information that appears in his name as soon as he places it in a specific device, in an interactive manner.

Upon leaving the welcome hall, the German campus will transfer the visitor to the Energy Laboratory, where the dazzling educational journey begins, with models of the latest innovations reached by Germany, including a system for generating energy by the power of sea waves, and another is light chips for storage, which can be moved and installed over homes with ease. To get solar energy in an easy and clean way.

And from the Energy Laboratory, to the city of the future, where imagination, as the city is closer to a science fiction movie, but the surprise, according to the creative director and member of the executive committee supervising the pavilion, Andreas Horbelt, is that many of the details of the future city, including giant magnetic elevators, are already manufactured models. You may see the light of day in five years.

From the dazzling city of the future, visitors go to the Biodiversity Laboratory, which is no less interesting than its predecessors, and reveals how Germany has succeeded in involving the people in research projects by monitoring bird and animal species, under the supervision of prominent scientists who relied on the information collected by members of society.

Thus, the study trip proceeds within the German university forum, in which the visitor progresses from the level of a specialist, through an expert, to the level of a genius, to be transferred at the final stop to the graduation hall.

Once entering this hall - according to the trip made by «Emirates Today» - the visitor to the pavilion finds a number of hammocks suspended by illuminated bars, and before sitting on them, the visitor is alerted to the need to adhere to the instructions: not to swing before obtaining permission to do so, and not to leave the hammock before the end of the session. The graduation offer, because the lack of commitment by one person can spoil the graduation ceremony, and stop the show entirely, in order to establish a culture of commitment and participation.

And when the ear is issued, everyone begins to swing in sync and in harmony, to generate with their movement energy that lights up the hammock bars, with a video that demonstrates the value of man and his great role in protecting his planet, and developing solutions to challenges related to sustainability, and then ends an exceptional study trip that lasted only half an hour inside the university campus German.

• Before entering, the guest must register his name, to be printed on a smart card, to be found on the walls inside.

• 100,000 golden plastic balls in which young and old swim, who will discover that it is not only for entertainment, each of them carries information.

• “Many of the details of the city of the future, including the giant magnetic elevators, there are already manufactured models, and they may see the light within five years.”

When queuing is fun

Seeing a long queue in front of the entrance to the German pavilion is a familiar sight, according to "Emirates Today", but with that there is a smile on the faces, the waiting in itself is not boring, because it is accompanied by an interesting presentation about the German federal system, with its 16 states, during which each state defines itself in a way amusing.