The "coup of the century to drug trafficking": Antonio Usuga arrested in Colombia

"A success comparable only to the fall of Pablo Escobar" says Colombian president, Ivan Duque, on twitter, also revealing some details about the capture 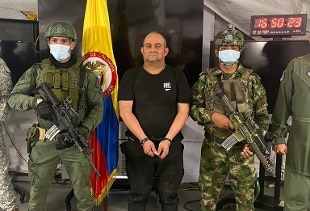 Dairo Antonio Usuga, one of Colombia's most wanted drug traffickers, was arrested.

This was announced by the Colombian authorities.

Usuga has been on the run for more than a decade, bribing state officials and siding with left and right fighters.

The Colombian army presented Usuga to the media in handcuffs and wearing rubber boots favored by rural peasants.

Usuga, better known by his alias Otoniel, is the alleged leader of the feared Gulf Clan, whose assassin army has terrorized much of northern Colombia to gain control of major cocaine smuggling routes through dense jungles north to the 'Central America and the United States.

"Success comparable to the fall of Escobar"

The arrest of Usuga "is the hardest blow that has been inflicted on drug trafficking in this century in our country, a success comparable only to the fall of Pablo Escobar" states Colombian President Ivan Duque on twitter, also revealing some details about his capture. The Colombian police carried out "an important satellite operation with US and UK agencies", the director of the police force, General Jorge Vargas, explained in a press conference.

The operation, during which a police officer was killed, mobilized about 500 members of the security forces, supported by 22 helicopters, he said.

'Otoniel' was then flown to Bogota last night, where he was taken to a police station under a tight escort.

Indicted by American justice in 2009, Usuga is at the center of an extradition procedure in the New York Southern District Court.

"There are extradition orders for this criminal and we will work with the authorities to achieve this as well," said President Duque.

Clan, headed by the drug trafficker, was made up of former members of paramilitary groups who until the 2010s led a fierce fight against the leftist guerrillas.

The Colombian government accuses the Gulf Clan of being one of the culprits of the worst wave of violence that has shaken the country since the signing of the peace agreement in 2016 with the guerrillas of the Revolutionary Armed Forces of Colombia.