Inzaghi sent off after the penalty granted to the guests at the end: it is 1-1 The goal of the advantage of Dzeko (Ansa) Share 24 October 2021A draw that will be of little use to Inter and Juve, but has saved the Bianconeri from a disastrous defeat. The rigor of the draw was not accepted by Inzaghi, who was sent off. In the first part of the match we saw more Inter and Dzeko's goal (with Juve in ten) underlined the lack of reactivity of the bianconeri in defense. Forward, 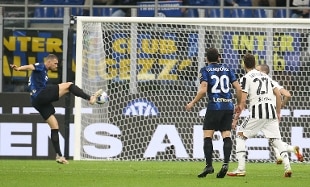 The goal of the advantage of Dzeko (Ansa)

24 October 2021A draw that will be of little use to Inter and Juve, but has saved the Bianconeri from a disastrous defeat. The rigor of the draw was not accepted by Inzaghi, who was sent off. In the first part of the match we saw more Inter and Dzeko's goal (with Juve in ten) underlined the lack of reactivity of the bianconeri in defense. Forward, Allegri's team was not as dangerous as other times and the Italian champions closed the first half ahead. Chiesa and Dybala were on the bench. In the second half the bianconeri are better. Little has been seen of Lautaro. Allegri tried to change the course of things with Chiesa and Dybala. Juve seemed more dangerous, but it was the disputed penalty of "Joya" that avoided defeat. A draw, this one at San Siro, which slowed down both Inter (one point in two games),both Juve who stopped after hitting a series of four consecutive victories in the league. The Juventus team now faces a very steep road to recover lost ground. Allegri's team is at -10 from the top, while the Nerazzurri are at -7.

Inzaghi had relaunched Bastoni and fielded Calhanoglu from the start. The Juventus coach, who had found Morata full time, had joined Kulusevski and had fielded Alex Sandro from the start. The Nerazzurri changes: at 16 'of the second half Gagliardini for Calhanoglu; at 27 'Sanchez and Dumfries for Lautaro and Perisic; at 45 'Vecino for Barella. The Juventus substitutions: on 17 'of the first half Bentancur in place of the injured Bernardeschi; in the second half, at 19 'Chiesa and Dybala for Cuadrado and Kulusevski; at 38 'Arthur and Kaio Jorge for Locatelli and Mckennie.

In front of 56,500 spectators, including the coach Mancini, the first move was by Inter who launched dangerously forward. Juve tried to prevent Brozovic from organizing the Nerazzurri game, putting Kulusevski on his tracks. It was Handanovic who had to neutralize (with difficulty) a shot by Morata. On the Nerazzurri front, Perisic is active. Bernardeschi injured his right shoulder and Juve remained in ten: the injured player asked for a minute to decide whether to continue. So, on 17 ', with the Bianconeri outnumbered, a shot by Calhanoglu deflected by Locatelli hit the wood to Szczesny's left and Dzeko bagged the rebound.

The Juventus defense is not very ready. Cuadrado then tried from a distance, grazing the target. Juve did not seem very incisive in the first half (Morata put out a decent ball in the final) and naive about the goal conceded. Bianconeri leaned forward in the second half, in an attempt to straighten the match. Inter's sporadic attempts - such as Dzeko's with a header - did not lead to doubling. Inzaghi took precaution with Gagliardini for Calhanoglu. Perisic shot the stars after a fugone on the left. Inter continued to undermine Juve. With the changes Juve became more offensive and Alex Sandro shot out a low ball. A low free kick at Dybala's near post was controlled by Handanovic. Allegri turned Juve like a sock and in the 43rd minute with thehelp from the Var on Dumfries' intervention on Alex Sandro, Mariani pointed to the spot. Inzaghi sent off. And Dybala equalized from the spot. Dzeko (effective across the board) and Barella for continuity were the strong points of the Nerazzurri team. Active Alex Sandro in the left lane. Well Dybala. In any case, a draw that slows Inter and does not make Juve make a real leap forward.

At the end of the ninth day, the top of the table sees the Napoli-Milan duo at 25, followed by Inter at 18, Roma at 16, while the trio Atalanta, Fiorentina and Juventus are at 15.