In an operation in the jungle with 500 elite soldiers and 22 helicopters, Colombia has arrested the country's most wanted drug king Dairo Antonio Úsuga, also known as "Otoniel". He leads Colombia's most powerful drug cartel, the Gulf Clan, and has been hunted for many years. 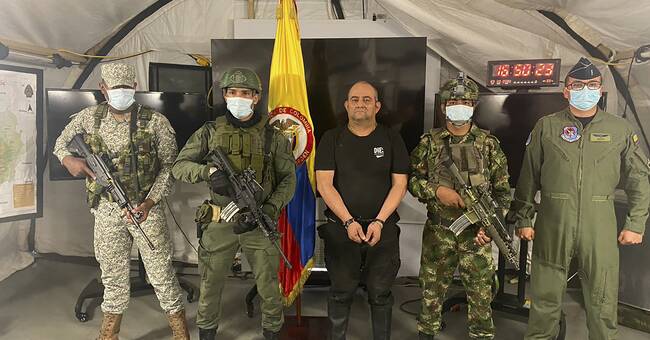 Pictures released by the government show 50-year-old Otoniel in handcuffs guarded by soldiers.

Police later sent live pictures from when he landed in the capital Bogotá.

The massive dawn effort took place in the jungle in the municipality of Necoclí in the Urabá region in northwestern Colombia, in collaboration with the United States and Great Britain, says the country's police chief Jorge Vargas.

Can only be compared to the arrest of Escobar

The raid was "the largest penetration of the jungle in our military history," said President Iván Duque.

He calls the arrest the hardest blow to the country's drug smugglers in over twenty years and says it marks the end of the great Gulf clan.

The arrest can only be compared to the case of former drug lord Pablo Escobar, according to the president.

- We send a clear and powerful message to the criminals: submit to justice immediately, otherwise the long arm of the law will reach you too, he says in a speech.

Colombia is the world's largest exporter of cocaine and the Gulf clan's armed men have terrorized much of northern Colombia through their control of the major smuggling routes to the United States.

Otoniel is said to have stayed hidden in the jungles of the Urabá region and should never have moved near inhabited areas.

He had no telephone and was dependent on couriers, according to police.

In the hunt for Otoniel, both Colombia and the United States have promised multi-million dollar rewards to anyone who provides information leading to Otoniel's arrest.

In the end, it was intelligence from the United States and Britain that led to a dawn raid on Friday morning, the authorities state.

More than 500 soldiers from the country's special forces and 22 helicopters attacked Otoniel's hiding place, where he was rigorously guarded.

A police officer is said to have been killed in the operation.

The drug lord was charged in his absence for the first time in the United States in 2009 and may be extradited there.

In 2012, Otoniel succeeded his brother as leader of the Gulf Clan, formerly known as the Úsuga Clan, when he was killed in a raid.