Last week, China and Russia held a large-scale military exercise code-named "Maritime Joint-2021" in the waters of Japan, and conducted a joint cruise this week. The Sino-Russian maritime joint military exercises have been held 9 consecutive times since 2012.   The theme of this joint exercise is "Maintaining the Safety of Strategic Maritime Channels", which is also a normal arrangement made ac 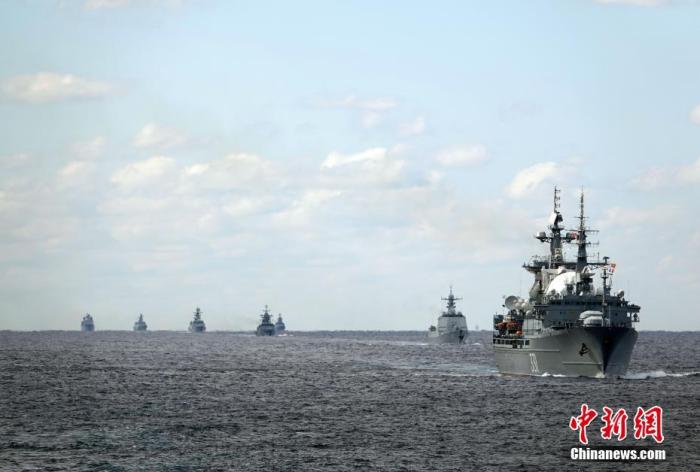 Last week, China and Russia held a large-scale military exercise code-named "Maritime Joint-2021" in the waters of Japan, and conducted a joint cruise this week.

The Sino-Russian maritime joint military exercises have been held 9 consecutive times since 2012.

The theme of this joint exercise is "Maintaining the Safety of Strategic Maritime Channels", which is also a normal arrangement made according to the annual plan.

The Russian "Kommersant" believes that the Sino-Russian joint performance reflects the high degree of strategic mutual trust between the two countries.

The cooperation between the two major powers in Northeast Asia has also demonstrated the determination and ability to jointly respond to "new challenges" in geopolitics.

On the afternoon of October 14th, in the international waters of Peter the Great Bay in the Sea of ​​Japan, the large-scale Sino-Russian "Maritime Joint-2021" military exercise officially opened.

On October 15, the exercise entered subjects such as live ammunition.

However, according to a statement from the Russian Ministry of Defense, at about 5 p.m. that day, the U.S. Navy destroyer "Chafi", which had stayed in the Sea of ​​Japan for several days, suddenly approached Russian territorial waters and sailed into the forbidden sea area for artillery shooting in the Sino-Russian joint exercise, and " Trying to cross national boundaries".

The "Chafi" is one of the latest ships of the US Navy. It was built in 2002 and has a displacement of more than 9,000 tons. It can carry dozens of Tomahawk cruise missiles and has the ability to search for military intelligence.

The large-scale anti-submarine ship "Admiral Tributz" of the Russian Navy patrolling nearby immediately warned the US ship to cease operations.

According to the Russian Ministry of Defense, the "Chafi" not only did not change its course after receiving the Russian warning, but instead raised the signal flag on the helicopter deck to prepare for the carrier helicopter to take off.

From the pictures taken on the Russian anti-submarine ship "Admiral Tributz", you can even see paratroopers standing next to the open hatch.

In the end, the "Chafi" was driven away less than 60 meters from the Russian ship. The Russian side said that the entire incident lasted about 50 minutes.

Russian military expert Korotchenko: Russia will not allow the United States to take similar actions. If the United States tries to flex its muscles, they will receive the necessary severe lessons from the Russian Navy’s response.

That night, the Russian Ministry of Defense summoned the military attaché of the US Embassy in Russia and pointed out that the US's behavior was extremely unprofessional and seriously violated international conventions and norms such as the 1972 Convention on International Regulations for Preventing Collisions at Sea.

Also at the beginning of this month, the USS Seawolf-class attack nuclear submarine "Connecticut" collided with an unidentified underwater object in the South China Sea.

According to the analysis of the Russian Satellite News Agency, the U.S. dispatched ships have been extremely active recently, continuously testing the bottom line of China and Russia through the "sausage cutting" method. This typical strategic misjudgment will further complicate the situation.

On October 18, after the 4-day Sino-Russian joint exercise ended, the two sides sent 5 ships to form a naval formation of 10 ships to continue the strategic cruise and sail to the North Pacific.

The fastest route from the Sino-Russian exercise site to the North Pacific is through the Tsugaru Strait.

The Tsugaru Strait, located between Honshu Island in Japan and Hokkaido, is only 18.7 kilometers at its narrowest point. It is an important navigation route linking the Sea of ​​Japan with the North Pacific.

Deutsche Welle’s comment stated that during the Cold War, as a bridgehead for the United States against the Soviet Union in the Far East, Japan divided the five waterways including the Tsugaru Strait into “specified waters” and designated the middle line of the strait as an “international waterway” for convenience. The passage of US military nuclear-powered aircraft carriers and other warships will not violate the "three principles of non-nuclear weapons" adopted by Japan in 1971, that is, not possessing, manufacturing, or bringing into nuclear weapons.

In 2017, Chinese warships crossed the Tsugaru Strait; during the joint Sino-Russian naval exercise in 2013, seven Chinese warships also entered the Sea of ​​Japan through the Tsushima Strait.

In 2019 and 2020, China and Russia conducted joint strategic air cruises over the seas of Japan. The first joint strategic maritime cruise held this week was regarded as a new starting point by the outside world.

Russian military observer Viktor Litovkin pointed out that the joint cruise of the Chinese and Russian armies showed that "the United States is not the ruler of the world."

However, this blameless move in compliance with international law has caused an "unusual reaction" in Japan.

The Ministry of Defense of Japan dispatched P-3C anti-submarine patrol aircraft of the Maritime Self-Defense Force and ships of the 45th Minesweeper Squadron to collect information.

The Japanese Integrated Staff and Supervision Department issued a special notice, announcing the photographed lineup of the Chinese and Russian navy formations.

According to the Ministry of Defense of Japan on the 21st, the Chinese-Russian frigate also conducted helicopter take-off and landing training in the waters about 50 to 100 kilometers southwest of Sumishu Island in the Izu Islands at about 4 a.m., and the Japan Air Self-Defense Force dispatched fighter planes for emergency ascents. null.

According to the action road map released by the Ministry of Defense of Japan, the Chinese and Russian naval fleet seems to be "drawing a circle" around Japan.

According to the analysis of The Japan Times, China and Russia cruising across the Tsugaru Strait can be regarded as a response to the establishment of the “Trilateral Security Partnership” named “AUKUS” by the United States, Britain, and Australia last month. According to the agreement, the United States and Britain will help the Australian Navy establish a nuclear submarine force and deploy at least eight nuclear-powered submarines.

The Tsugaru Strait, which has attracted much attention this time, is historically a water channel connecting Japan’s Honshu Island and Hokkaido. It was also an important “military springboard” for Japan’s external expansion on the eve of World War II.

In 1869, the Meiji government renamed the "Ezo" that had just returned to the central government as "Hokkaido", formally ruled and "opened up", and formed a second division from Sendai on Honshu Island to station.

In January 1902, in order to explore a land transportation channel from Honshu Island to the Tsugaru Strait and further expand outward, the Japanese army sent two units to try to cross Hakkoda Mountain in the winter.

As a result, the Japanese army with rigorous anti-cold equipment suffered a severe cold of minus 20 degrees, and only 11 of the 210 people survived, thus drawing the conclusion that "you cannot fight under severe cold."

However, after the "Hakkoda Mountain" incident, the Japanese army did not stop its plots of further aggression against the Korean Peninsula and northeast China at the same latitude.

In 1931, at the time of the September 18th Incident, the second division based in Hokkaido was the main force of the Japanese invaders.

The strategic pattern of Northeast Asia after World War II was closely related to the Yalta Conference in February 1945.

After the outbreak of the Korean War, Japan became a rear base for the US military.

Japan and Germany were both defeated countries in World War II. Germany's post-war self-reflection and transformation were more thorough, but Japan still has a large number of remnants of militarism because of the connivance of the United States.

How to prevent the resurrection of Japanese militarism in the new situation has always been a topic of concern to neighboring countries.

On October 15, Japanese Prime Minister Fumio Kishida said in an exclusive interview with "Yomiuri Shimbun" that he would consider revising Japan's "National Security Strategy" so that the Japanese Self-Defense Force has the ability to strike at potential enemy missile bases.

At the same time, the Liberal Democratic Party of Japan also proposed to increase the proportion of the defense budget to 2% of GDP, breaking the limit that the Japanese cabinet has consistently insisted that the defense budget should not exceed 1% of GDP.

On October 17th, Kishida offered to the Yasukuni Shrine a sacrifice of "True Saki" in the name of the "Prime Minister," which once again reflected the negative attitude of Japan towards its own history of aggression.

The North Korean Academy of Defense Sciences stated that the missile uses a variety of upgraded guidance technologies such as side maneuvering and gliding and jumping maneuvers.

I have instructed the government to consider all options, including the so-called ability to strike enemy bases.

On October 21, North Korea’s Ministry of Foreign Affairs issued a statement stating that the US accusing North Korea of ​​testing a new type of submarine-launched ballistic missile was an overreaction to North Korea’s legitimate right to self-defense.

The United States blames North Korea while possessing or developing weapons. This is an obvious double standard.

In the eyes of the outside world, exaggerating threats and creating tension are just excuses for the United States, Japan and other countries to expand their military capabilities and seek absolute security advantages.

The Japan Broadcasting Association noted that Japan, the United States, Australia and other countries have repeatedly held multilateral military training in the "Indo-Pacific region."

The Russian Satellite News Agency quoted analysis of military experts and pointed out that Japan has shown "high attention" to the Sino-Russian joint strategic cruise, and it also reflects the "narrowness" of its own way of thinking.

On October 4, 64-year-old Fumio Kishida was sworn in and became the 100th Prime Minister of Japan.

After taking office, Kishida talked with US President Biden on the phone for the first time.

I have confirmed with President Biden that we will work together to strengthen the Japan-US alliance.

David Leheny, an Asia-Pacific scholar at Waseda University in Japan, believes that Kishida has sent a signal to unilaterally follow the United States and adopt a "tough" attitude toward diplomacy.

Recently, the United States, Japan, Australia, India and other countries have engaged in closed, exclusive, and "small circles" targeting other countries in the Asia-Pacific region, which has aroused the vigilance of neighboring countries.

establishment of an alliance circle will definitely undermine the stability of the region. In my opinion, it is a good thing to establish a friendly relationship, but if this relationship is to oppose others, it is not good.

From October 12th to 15th, the navies of the US, Japan, Australia and India conducted the second phase of the "Malabar 2021" maritime joint exercise in the Bay of Bengal.

From October 4 to 10, the United States, Britain, Japan, Canada, the Netherlands, and New Zealand sent a total of 17 warships to piece together the so-called "six nations" military exercises in the South China Sea.

In August, the British "Queen Elizabeth" aircraft carrier strike group held a joint exercise with ships from Japan, the United States and other countries in the southern waters of Okinawa, Japan.

In May, the United States, Japan, and France launched a joint land-based military exercise in Kyushu, Japan.

international community clearly sees who is showing off force, provokes trouble, and who uses military deterrence under the guise of "freedom of navigation" to undermine regional peace and stability.