A student of the nationality of an Arab country died after being run over in front of his school in Fujairah, yesterday morning. The Director of the Traffic and Patrols Department at the General Command of Fujairah Police, Colonel Saleh Muhammad Abdullah Al-Dhanhani, told "Emirates Today" that the deceased child is Abdulaziz Sharif Abdulaziz (five years), and that he NS 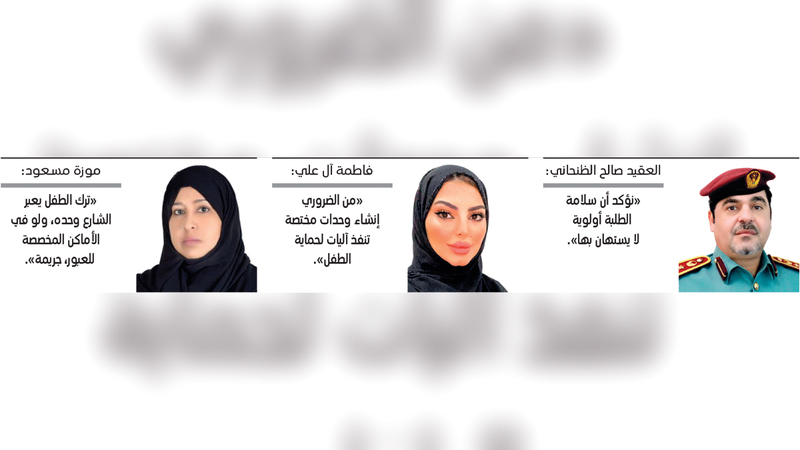 Lawyers: Imprisonment of up to 3 years and a fine of 5,000 dirhams, a penalty for endangering the child's life

A student of the nationality of an Arab country died after being run over in front of his school in Fujairah, yesterday morning.

The Director of the Traffic and Patrols Department at the General Command of Fujairah Police, Colonel Saleh Muhammad Abdullah Al-Dhanhani, told "Emirates Today" that the deceased child is Abdulaziz Sharif Abdulaziz (five years old), and that he died yesterday morning, after a run-over accident while crossing the street, heading to his school. (St. Mary's Catholic School) in the Sukmkum area in the Emirate of Fujairah.

He pointed out that a report was received to the General Command of the Fujairah Police, stating that a run-over accident occurred at 7:23 am yesterday, and immediately police and national ambulances headed to the scene of the accident, where it was found that the child crossed the street adjacent to his school alone, which led to him running over by a vehicle. It was driven by an Arab person, pointing out that the child died immediately after the run-over accident, as a result of his severe injuries.

He pointed out that crossing students alone through areas designated for pedestrian crossing, especially those under 10 years old, is extremely dangerous, as every child crossing alone these vital streets is a potential victim of a run-over accident, given their young age, and their inability to discern the right time. To cross, bearing the great responsibility of those who dropped them off, whether the driver of a bus or a vehicle for transporting students, or their guardians, stressing that the safety of students is a priority not to be underestimated.

Al-Dhanhani stressed that a comprehensive plan has been strengthened since the beginning of the new academic year, in order to preserve the safety of the lives of school students from the dangers they are exposed to, and to strive to provide a safe environment free of traffic accidents, as part of the precautionary measures taken to prevent "Covid-19".

He explained that there was a plan that included intensifying traffic patrols and traffic control to monitor the main and secondary roads in front of schools, and to ensure the availability of warning signs in the appropriate places near schools, stressing the need for security and traffic presence, to facilitate the flow of traffic in front of schools to prevent congestion, and to provide safe transportation for students. A comprehensive program has also been prepared for the implementation of the students' safety and security plan through the implementation of traffic awareness initiatives and programs and remote workshops, in coordination with the concerned authorities to spread awareness and traffic culture through social media.

Lawyer and legal advisor, Moza Masoud, confirmed that letting a child cross the street, even in places designated for crossing, is a crime against him, given that his life is endangered, whether by causing him disability as a result of a run-over accident or his death, noting that the laws on child protection came to protect children from no risk.

She pointed out that the penalties that have been set are fair, taking into account the right of the child who has been neglected and caused harm or death in any way, as the Child Protection Law stipulates that a penalty of imprisonment from one month to three years, or a fine of no less than 5000 dirhams, is imposed on each of the following: Caused endangering the safety of the child, or used to leave him without supervision or follow-up, and took him to places that might threaten his life or negatively affect his health, such as places of smoking or the emission of toxic gases and the manufacture of weapons, as well as places where various diseases and epidemics spread.

Masoud added that the law criminalizes every act or omission that would cause harm to the child, and prevent him from raising him and developing him in a sound, safe and healthy manner, including the failure of the parents or the caretaker of the child to take the necessary measures to preserve his life and physical integrity.

Lawyer and legal advisor, Fatima Al Ali, stressed that the responsibility to protect the child is not limited to parents only, but includes the bus driver, the teacher, and anyone who has custody of the child, noting that society must participate in protecting children who are at risk, by warning The person who endangers the child's life, whether by crossing the internal streets or the main streets adjacent to the school alone.

And she continued: "In the event that the person causing the harm to the child does not respond, community members must submit a report against him to the nearest police station, so that the competent authorities can take the necessary measures against him, in order to preserve the lives of children from run-over accidents."

She pointed out that the competent authorities are authorized to direct the person causing harm to the child and endangering him, by raising his awareness, and signing pledges not to repeat this behavior.

She pointed out that it is necessary to establish specialized units to develop and implement mechanisms and measures that would protect the child, through preventive intervention in cases where it was found that his health and physical, psychological, moral or mental integrity are threatened, or at risk due to neglect.

• Every child crossing the lively streets alone is a potential victim of a run-over accident.

• A comprehensive plan in Fujairah since the beginning of the academic year to maintain the safety of students.

The lawyer and legal advisor, Fatima Al Ali, called for benefiting from the hotline service of the Ministry of Interior for the protection of children 116111, to report cases of child abuse, which includes neglecting them in public and vital ways, and to benefit from electronic reporting through the website of the Ministry for Child Protection, and the application of My Protection on Smartphones.