Hungary: Viktor Orban applauded by tens of thousands of supporters

A few months away from the legislative elections which are shaping up to be very close, sovereignist Prime Minister Viktor Orban gave a very applauded speech this Saturday, on the occasion of the commemoration ... 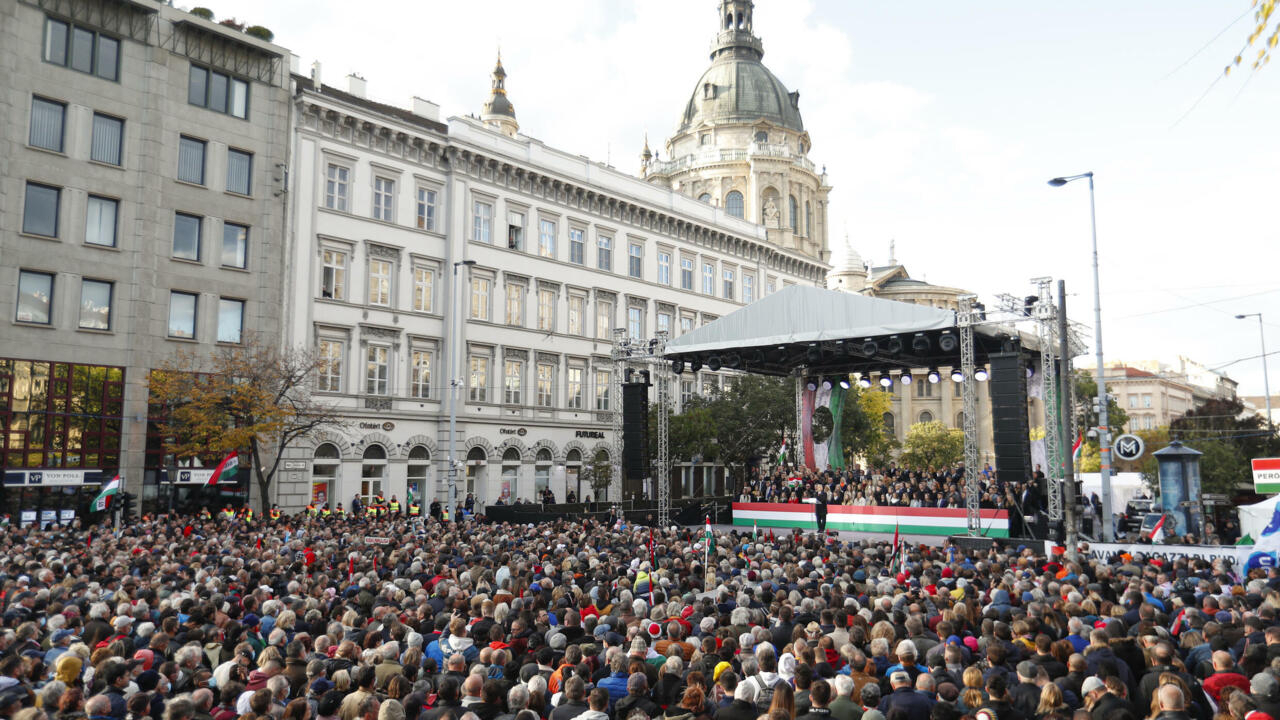 Hungary: Viktor Orban applauded by tens of thousands of supporters

Hungarian Prime Minister Viktor Orban addressing his supporters during the celebration of the 65th anniversary of the Hungarian Revolution of 1956, in Budapest, October 23, 2021. AP - Laszlo Balogh

A few months away from the legislative elections which are shaping up to be very tight, sovereignist Prime Minister Viktor Orban gave a very applauded speech this Saturday, on the occasion of the commemoration of the Hungarian insurrection against Soviet power in 1956.

Sandor Galik waves a red, white and green flag in the colors of Hungary.

This retired civil servant came from the provinces, with all his family, to listen to Viktor Orban.

The Prime Minister is increasing financial aid for the middle class.

My daughter and my son will be exempt from taxes for a year,”

Me, I will be paid for my retirement over 13 months. So we came to support the Prime Minister, to show that he is not alone and that he is a good man. We want to honor him.

Brussels speaks to us as if we were an enemy.

, ”says Viktor Orban from his platform at the start of Andrassy Avenue - the most beautiful artery in Budapest, compared to the Champs-Elysees.

Tibor Farkas, mechanical engineer, is proud of his Prime Minister.

He's the best prime minister we've had in a long time,

It's great the way he defends our interests in Europe.

We do not want this gender identity advocated by Brussels.

We want a Christian culture.

A society more polarized than ever

Even if he faces an unprecedented opposition alliance, Viktor Orban remains very supported by right-wing voters.

Viktor, I love you,

On other signs, printed by Fidesz, Orban's party, and distributed to the demonstrators, we read: “

The party had done the right thing: dozens of buses chartered by the organizers had transported numerous demonstrators from the provinces to Budapest.

Under a tent, caps and umbrellas bearing Viktor Orban's logo “VO 22” (his initials and the date of the next elections) were selling like hot cakes for the equivalent of 10 euros each.

At the end of the same Andrassy avenue,

, the surprise candidate chosen by the

to challenge Viktor Orban in the next legislative elections, also gave a speech in front of thousands of Budapesters.

For years, the two political camps no longer commemorate the national holiday together, but separately.

And as elections approach in April 2022, Hungarian society is more polarized than ever.

See also: Hungary: an EU delegation in Budapest to assess the situation of the rule of law