The tattoo artist Rassmus Petersson in Söderhamn covers tattoos with hate messages in the "Erase the hate" campaign free of charge. The former white power musician Tomas has long wanted to remove the Nazi symbols from his body and leave the weight power environment, but did not dare. Until now. 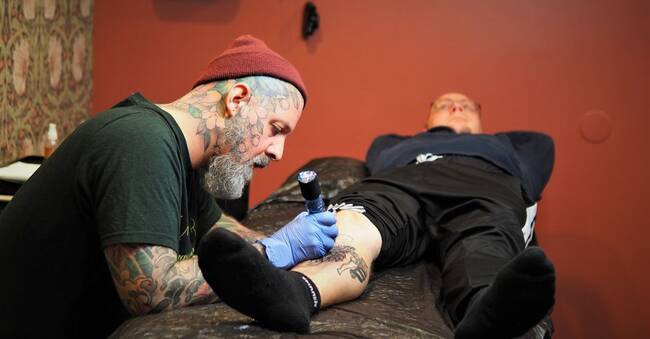 It started with Tomas meeting skinheads at a rock concert.

In a spiral of abuse and violence, he was drawn further and further into the Nazi milieu and became a prominent figure in white power music.

The turn to a normal life for Tomas began nine months ago when he checked into a treatment home for his addiction.

- Deep down, I have just shouted "get out of here" but I have not dared, says Tomas Ek.

The tracks are still online

In support of taking the final step out of his previous life, there is Tomas' ex-girlfriend Anna-Lena, who herself left the white power movement several years ago.

But the traces of their past lives remain on the internet with music and films from their performances at Nazi concerts.

- The worst thing is that the children can go in and apply for this, which they have done.

I have explained to the children that mom and dad previously did not think that all people had the same value.

But then we changed and realized that all people have the same value, says Anna-Lena Joners Larsson.

Do it out of compassion

The tattoo artist Rassmus Petersson, who removes hateful tattoos for free, says that the most important thing for him is compassion and love.

He knows those who want to leave their past.

- Imagine that the worst thing you have done is visible to everyone.