Hazza Al-Mansoori: The world in "Expo" resembles the earth from the sky (video)

Expressions of ambition and hope appeared on the faces of Emirati children of different nationalities, as they surrounded the first Emirati astronaut, Hazza Al Mansouri, to take pictures with him during his tour with his colleague Sultan Al Neyadi around the “Expo 2020 Dubai” during the Space Week. 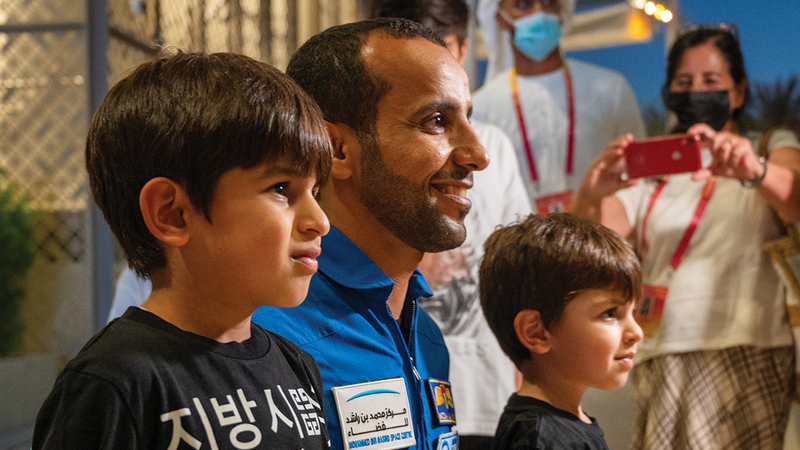 He stressed that the dreams of future generations have changed after "Zayed's ambition".

Hazza Al-Mansoori: The world in "Expo" resembles the earth from the sky (video)

Expressions of ambition and hope appeared on the faces of Emirati children of different nationalities, as they surrounded the first Emirati astronaut, Hazza Al Mansouri, to take pictures with him during his tour with his colleague Sultan Al Neyadi around “Expo Dubai 2020” during Space Week.

With a tangible impact, Hazza Al Mansouri commented on the children’s reactions towards him, telling “Emirates Today”: “Five years ago, it was impossible for an Emirati child to dream of becoming an astronaut, but what I touch now shows how the enlightened leadership of the state changed the dreams and aspirations of future generations through The UAE space program, specifically the Hope Probe and the Zayed Ambition mission.

He added about his exceptional journey into space: “I used to see the Earth without borders between countries while I was at the International Space Station at an altitude of about 400 km from Earth, and this is exactly what I see now at (Expo), the world is here in our country without borders between countries, to achieve The same goal, which is science, knowledge, innovation and sustainability.”

The first Emirati astronaut indicated that his participation in the "Expo Dubai" exhibition within the framework of the Space Week activities brings back to him the memory of his experience at the space station, and renews his feelings of the same, when he saw the Earth from afar without borders between countries, as the international exhibition provides the same unique experience, with the participation of 192 countries without borders between their wings, or discrimination between one country and another in an atmosphere of enthusiasm and passion.

He explained that he was part of a team consisting of several nationalities, whose main concern is science, knowledge, innovation, and studying challenges that humans must overcome in the future, such as water security, risks of water shortage, scarcity of energy resources, and threats to food security, stressing that “studying these challenges and discovering solutions It is not limited to one nationality without another, as we all gather in space for the entire future of the planet, and this is the experience that I am always keen to convey to children and youth as it is the nucleus of the future of this planet.”

Al-Mansoori stated that he saw all the values ​​​​in the "Expo", as he was working with Russian, American, European and other astronauts, everyone within the exhibition shares their diverse experiences and experiences, and they all strive to achieve one goal, which is science and innovation, pointing out that he and his colleagues represented the planet in Space, while the planet is now meeting in the «Expo».

About the children gathered around him and their eagerness to take pictures with him with pride, Al-Mansouri said, "They are the nucleus of the future, and I feel very happy when I talk to them and tell them how planet Earth looked like from a height of 400 kilometers, with its beautiful and wonderful terrain, the borders between its countries, and how we were going around Around the planet in 90 minutes, we are studying the phenomena we observe and the challenges we face.”

He considered that "the enlightened vision of the leadership of the UAE has fundamentally contributed to changing the aspirations and dreams of future generations. Our country today is the fifth country in the world to reach Mars, and we have competed with the largest countries in the world with the UAE space program, and we are still dreaming of achieving more, and discovering other planets such as Venus."

He believed that "these wonderful achievements were reflected on the children, as it was impossible five years ago for an Emirati child to dream of becoming an astronaut. They wished to become doctors or engineers and other professions, but the situation has changed now, as space is close to them, and their dreams have gone beyond the horizon." I feel this spirit in (Expo) and everywhere I go, which gives me positive energy and reinforces my conviction that the UAE will go far in the future in the field of space.”

"We are competing with the world's largest countries with the UAE space program, and we are still dreaming of achieving more and discovering other planets."

"Space has become close to the wishes of the new generations, and their dreams have gone beyond the horizon, and I feel this spirit in (Expo), and everywhere I go."

The first Emirati astronaut, Hazza Al Mansouri, revealed to "Emirates Today" that he was talking recently with Italian astronaut Luca Paramitan, who was with him on his journey in space, and together they remembered their rich experience and their efforts to explore more and go to other planets, and the importance of transferring this knowledge to future generations from During important events and events such as the Dubai Expo.