Brawl in the hospital, 3 health workers injured by the relatives of a sick woman

A nurse was hospitalized with rib fractures. Two other colleagues, also attacked by the woman's family, will recover in 15 days 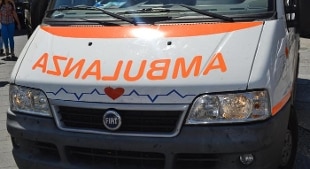 October 23, 2021 Violent brawl last night in the emergency room of the Vittoria hospital in Ragusa. Two people, of Romanian nationality, had accompanied a relative asking to be treated for a sudden worsening of her health conditions. The two allegedly demanded immediate care and would not accept waiting times, so they railed against the emergency room staff and attacked two nurses and a health worker. Three people were injured: a nurse was hospitalized with rib fractures. For him, a prognosis of 25 days. Two other colleagues, also attacked by the woman's two family members, will recover in 15 days.

The two Romanians also threw the chairs in the waiting room of the emergency room to the ground. To restore calm were the carabinieri of Vittoria, who intervened together with the police. The woman's partner, a 43-year-old Romanian, was charged with threats and aggravated injuries to a public official. The same happened for the woman's 15-year-old son. He will be dealt with by the Juvenile Court of Catania. The general manager of the ASP, Angelo Aliquò and his collaborators also arrived in Vittoria.

An attack in the emergency room is uncivilized regardless, but if it is carried out by foreigners, criminals known to the police, it is even worse. Unfortunately it is also predictable, which makes the event even more unbearable. People who are already working under pressure, such as health workers, must also be afraid of those they try to save and their families ", says Angelo Aliquò, director general of Asp 7 in Ragusa.

The number one of the Iblean health care company last night, as soon as he heard the news, went immediately, late in the evening, to the Guzzardi hospital. "The episode that took place last night in Vittoria's emergency room is emblematic. These horrible criminals who attacked and beat the operators have nothing to lose, they have rights like any of us, but they don't seem to be obliged to respect our rules of civilization. , are arrested and then released, beaten and stopped and then released, sometimes even before the police and carabinieri finish filling out the bureaucratic formalities.Our system does not favor the safety of health workers, law enforcement agencies, or much less of the citizens.It would not be necessary to arrive at these situations to understand that citizens must be protected and that security in the territory must be increased. To realize that the police forces are insufficient in number, it is necessary for a foreign criminal serial to be expelled after prison ".