The youngest son of the former King of Greece Constantine and Ana Maria of Greece, Filippos, married this Saturday with Nina Flohr in the metropolitan cathedral of Athens, a wedding ... 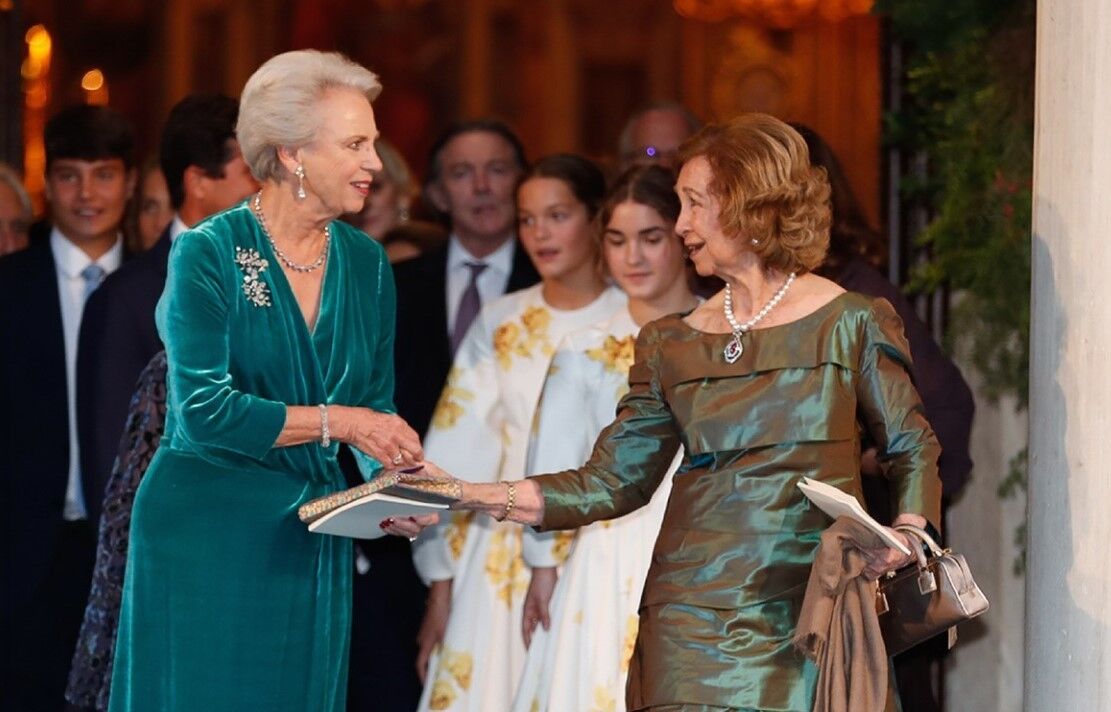 The youngest son of the former King of Greece Constantine and Ana Maria of Greece,

in the metropolitan cathedral of Athens, a wedding that was attended by the groom's aunt, Queen Sofia, as well as Infanta Elena, her cousin and godmother at baptism.

The prince gave the yes I want

for the orthodox rite

to which he is already his wife since last December, when they were married in civil matters in the Saint-Moritz ski resort (Switzerland), in an extremely intimate ceremony to which only The parents of the bride and groom, the former king and

due to the pandemic.

among the hundreds of guests, many of them relatives of the Grecians.

arrived with her sister, Princess Irene of Greece, shortly before the groom's father, and all were received with cheers by the onlookers gathered.

meanwhile arrived with Princess Benedikte of Denmark, paternal aunt of the groom.

Of course, Filippos's three older brothers were not lacking:

, who came with his wife Tatiana;

with Marie-Chantal and two of his children, and

, whose liaison with American lawyer Matthew J. Kumar is expected soon, although it is not yet dated and was postponed due to the pandemic.

Also present from the ancient Greek royal house were the historian

, son of Prince Christopher of Greece and Princess Francisca of Orleans, who came to the ceremony in the company of his wife, the painter Marina Karella.

Representatives of the Windsors, Hannovers and the Bulgarian royal house did not miss the event either:

Kyril of Bulgaria and Prince Ernest Augustus of Hannover, along with his wife Ekaterina, among many other members of the European nobility and society.

since that of Constantine and Ana María

, who just three years after the happy event had to exile from the country and, in 1974, leave the throne as a result of the referendum that abolished the monarchy in the Hellenic state when 69% of the population opted for a parliamentary republic.

Precisely in the Athenian cathedral

the kings Sofía and Juan Carlos

were also married by the Orthodox rite

The emeritus was not present today, nor were Kings Felipe VI and Letizia nor their daughters, Princess Leonor and Infanta Sofía, who are at the delivery of the Exemplary People's Award 2021, nor Infanta Cristina.

, wore a majestic princess-cut dress with a bateau neckline and a large bow under the bust, designed by Chanel, as she did in the civil ceremony, which she complemented with a veil. XL.

She crowned the ensemble with the delicate

just as her sisters-in-law did at their respective weddings.

It is an elegant piece created for Queen Victoria of Sweden, inherited by Ingrid of Denmark, the bride's grandmother.

The primate of the Greek Orthodox Church, Jerome II, was the archbishop in charge of officiating the ceremony, after which the guests went to

and surrounded by some of the most emblematic monuments of Athens, to enjoy the wedding feast.

The celebrations of this important event began the night before, with a gala party

, a privileged place south of Athens, and will last until Sunday, when the groom's father will present the royal guests with a meal in the Piraeus Yacht Club.

and got engaged in the early summer of 2020 on the mythical Greek island of Ithaca, in the Ionian, with their closest family.

The youngest of the Grecians was born in

London, where his parents were in exile

, and received a degree in International Relations from Georgetown University (Washington).

He currently works in Manhattan as an analyst in a company that manages investment funds, like his brother Pablo.

For her part, the Swiss heiress resides between the United States and the London neighborhood of

from where she works as creative director of the family business and founder of a luxury hotel in Mozambique, which includes a 300-hectare nature reserve with forests, dunes and impressive beaches.

RoyaltyPhilippos of Greece: another Greek prince, Doña Sofía's nephew, who marries a billionaire