Max Verstappen said he had his best race on behalf of Toro Rosso at the 2015 United States Grand Prix. The then eighteen-year-old driver battled for laps with Ferrari and Red Bull drivers and finished fourth. A look back at this wet race in Austin. 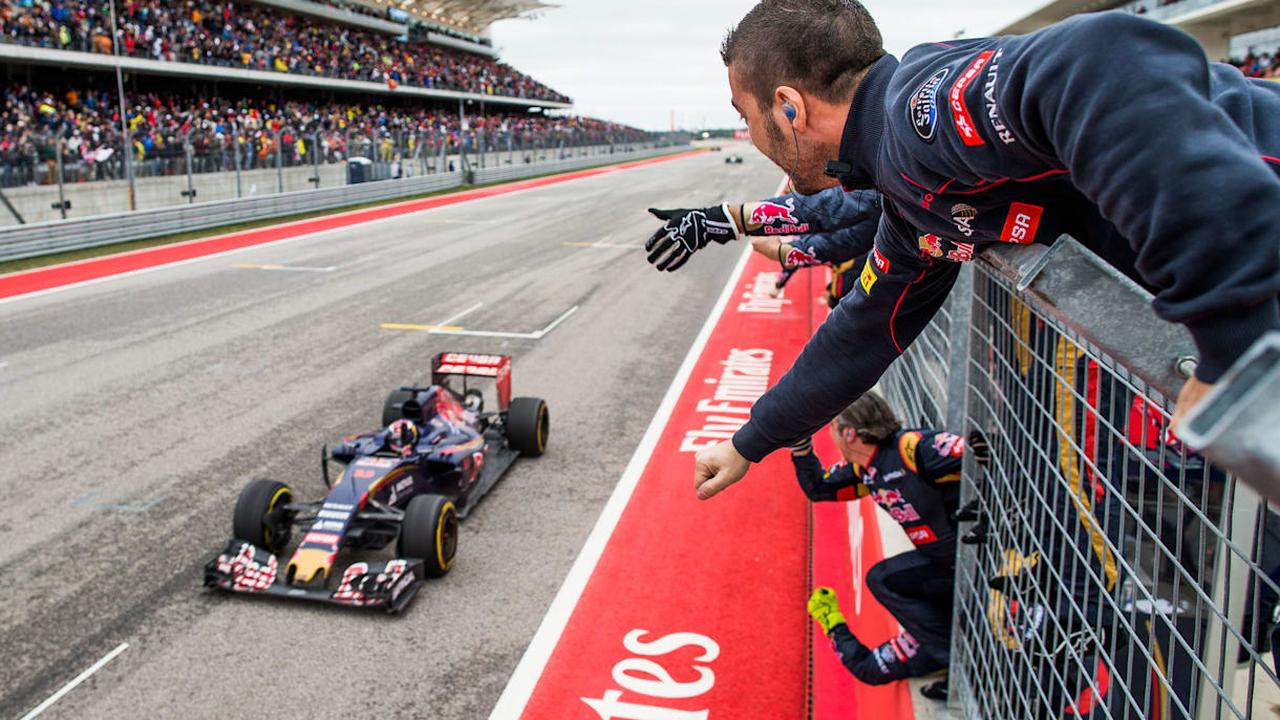 Max Verstappen said he had his best race on behalf of Toro Rosso at the 2015 United States Grand Prix.

The then eighteen-year-old driver battled for laps with Ferrari and Red Bull drivers and finished fourth.

A look back at this wet race in Austin.

"That guy pushes me off the track all the time when I drive next to him. If this is legal what he's doing then I'm going to do the same next time."

The Finn had to start from the back due to an engine change and was making an impressive advance until he got stuck behind the eighteen-year-old Limburger of Toro Rosso.

The American Grand Prix was held six years ago in exactly the conditions that Verstappen still regularly hopes for: unpredictable and rainy.

On Saturday it was even so wet that qualifying was moved to Sunday morning.

In it, Verstappen finished tenth, but he was allowed to start eighth due to grid penalties for other drivers.

The race started on a drying track and Verstappen was in his element in those conditions too.

Max Verstappen with Kimi Räikkönen and his teammate Carlos Sainz behind him.

Max Verstappen with Kimi Räikkönen and his teammate Carlos Sainz behind him.

Verstappen had worked his way up to seventh place in the opening phase and brutally chose the attack at Vettel.

With success: the young Toro Rosso driver ducked into a hole and outwitted the German, who was still in a title battle with Lewis Hamilton at the time.

The fight between Verstappen and Vettel went on for rounds.

Partly because the track became drier, Vettel Verstappen eventually passed, after which Räikkönen appeared behind the youngster.

Despite the speed difference between the cars, Verstappen defended his position - to the frustration of Räikkönen - tooth and nail.

Only after the first pit stops did Räikkönen pass Verstappen, although he couldn't enjoy it for long.

The 2007 world champion braked on a wet stretch and slid into the tire stack.

Räikkönen was still able to continue his race, but had no chance for a good result.

After a safety car period, Verstappen again opted for the attack and Daniil Kvyat of mother team Red Bull Racing was his prey.

Verstappen outwitted the Russian, just like his teammate Daniel Ricciardo, so that he worked his way up to fourth place.

Due to a crash by Kvyat, the safety car had to come out again and Verstappen was suddenly on the podium with third position.

Because Vettel was driving on newer tires, the Dutchman just failed to hold on to that spot, but with fourth place he still equaled his best result of the season.

Party with the Toro Rosso mechanics after Max Verstappen's fourth place in Austin.

Party with the Toro Rosso mechanics after Max Verstappen's fourth place in Austin.

Team boss Tost: 'This was an abnormal performance from Max'

"Max has put in an exceptionally good performance today," said the Austrian, who saw Verstappen make his debut in Formula 1 earlier that year at the age of seventeen.

"During qualifying this morning, he was able to drive decently on the track for the first time. The fact that he immediately manages to reach Q3 in qualifying shows his unprecedented talent. In addition, his race was also excellent: after the start he was able to taking on the Ferraris and other opponents, and was able to maintain his position, eventually finishing fourth without making a single mistake, and remembering that he had never driven here until today. "

Verstappen himself spoke of his best Grand Prix to date.

"I especially enjoyed the fight with Räikkönen, although I understood that he was a little less happy with it himself."

Verstappen would not be able to match his fourth place in the seven races he drove for Toro Rosso after the United States Grand Prix.

Six months after his strong race in Austin, he made the switch to Red Bull Racing ahead of the Spanish Grand Prix.