“Beauty amid war”, in Lecce the photographic exhibition of Fatima Hossaini

The artist will be a guest of the Academy of Fine Arts of Lecce for the first stop in Italy after Beijing, Tehran, New York and Paris. To cut the ribbon, the Minister of University and Research Mass: "no indifference towards suffering people" 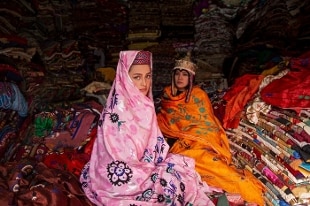 Afghanistan returns to live one of the darkest moments in its history. Among the numerous problems is the female question, a real drama within a drama. Deprived of fundamental freedoms and forced into silence, Afghan women have not stopped fighting, silently, showing themselves to be anonymous heroines of everyday life. Women no longer free to study, play sports, active politics.

tells the beauty and courage of Afghan women.

Cristina Messa, Minister of University and Research, inaugurated it.

Author of the shots is

Afghan photographer originally from Tehran, who took refuge in Paris to escape the fury of the Taliban, always a supporter of the rights of women and refugees.

The exhibition is open until November 22nd.

Here we propose two of the eighteen shots that tell the faces belonging to the different Afghan ethnic groups (Pashtun, Tajik, Hazara, Qizilbashes and Uzbeki).

The exhibition, which makes a stop in Italy for the first time after Beijing, Tehran, New York and Paris.

Hossaini teacher of Art at the University of Kabul, founder of Mastooraat Organization, promotes and supports art, women and peace, is winner of the international Hypatia award, for research and art. "I have always tried - explains the artist - to create beauty and to capture it in the middle of a conflict zone. My photos show my artistic journey, often challenging, exploring the gender and sociological perspectives of Afghan society. Women are you have always been at the center of my work and I have tried to capture and redefine them by showing their beauty, their femininity and their hopes ".

"I thank Fatimah for organizing this exhibition that also awakens our hearts and our souls. This exhibition is important not only for its beauty and artistic value, but for the message it sends on Afghan women, because it helps us not to be indifferent. , we must really avoid indifference towards a people who are suffering a lot, towards the fate of this land, Afghanistan, and towards the condition of women ", said Messa.

"Even in Italy, the opportunities for women in the academic world are not yet equal, especially with regard to careers: if there are perhaps more female researchers than researchers, then female professors are much less than professors. There is still a lot of work to be done" he added Mass.