"Reaping the fruits of self-confidence": why Europe continues to accuse Russia of provoking the energy crisis

Russia is responsible for the shortage of gas in Europe, says the leader of the Federal Republic of Germany "Soyuz-90 / Greens" party Annalena Berbock. The German politician also stated that Nord Stream 2 allegedly contradicts European interests. Earlier, the West has already accused Russia of deliberately creating a gas shortage in the EU, while Moscow has repeatedly reminded that the energy crisis was the result of market reasons and the policy of Brussels itself, which refuses to conclude long-term contracts for fuel supplies. Experts explain the claims of the Europeans by the fact that the union does not want to admit its own mistakes and is trying to impose its own terms of cooperation. According to political analysts, in the current realities, Russia is acting pragmatically. 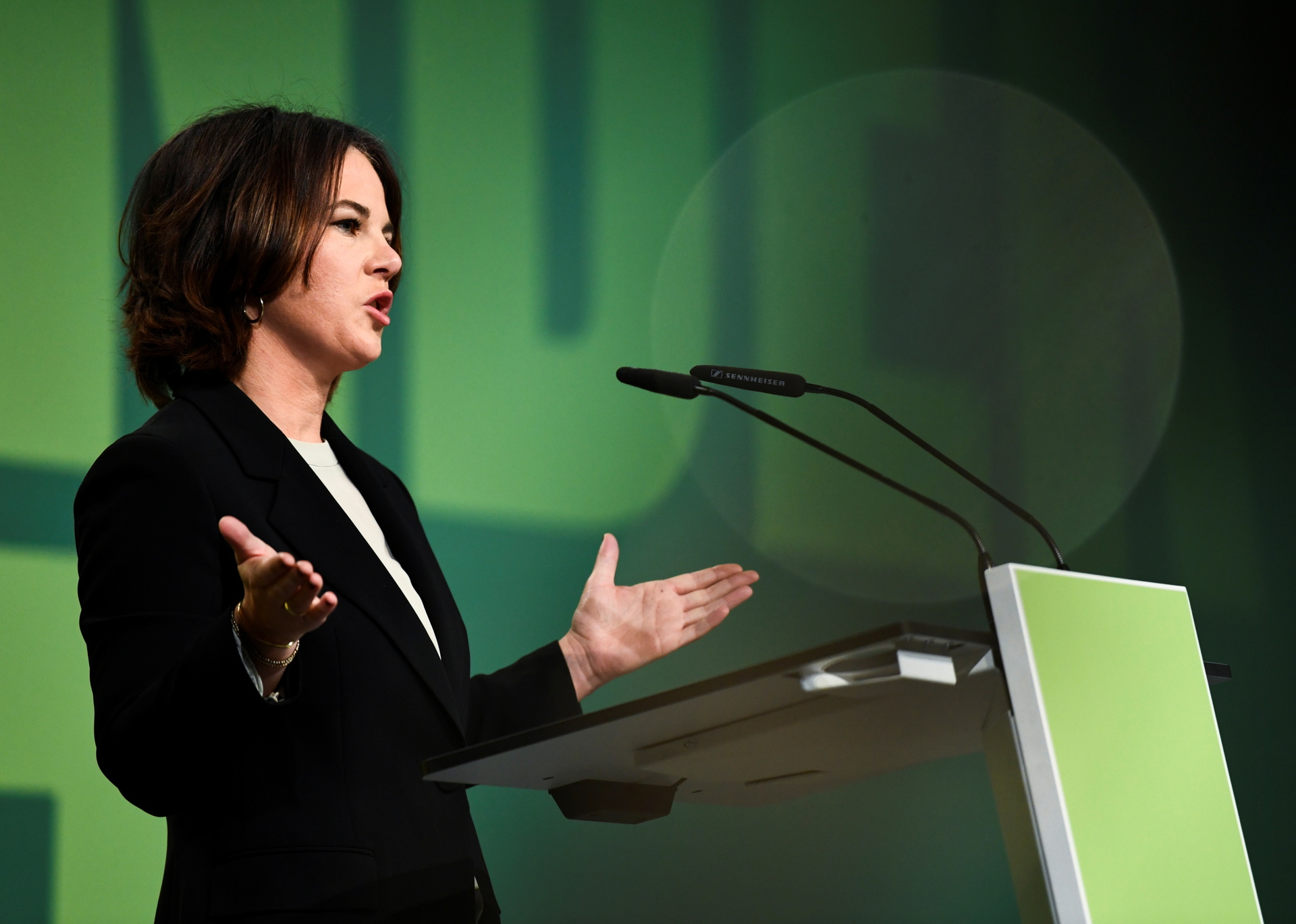 In an interview with Der Spiegel, the leader of the German Soyuz 90 / Greens party, Annelena Berbock, complained about Germany's excessive dependence on Russia for energy supplies.

“In this aspect (gas supplies. -

) we are dependent on Russia.

Now the point is not that Russia does not have enough gas for supplies, but that Russia has decided not to completely fill its gas storage facilities.

This makes us vulnerable.

And this shows that security and foreign policy are not always military issues, ”said Berbock.

Also, the German politician, who, according to some experts and the media, is likely to take the chair of the Foreign Minister of Germany, criticized the project of the Nord Stream 2 pipeline.

Berbock insists that the operation of the line must comply exclusively with EU legislation.

) state that Gazprom cannot simultaneously own a gas pipeline and let gas through it.

However, now we have just such a picture.

And this is just one of the reasons why, as you know, I think the creation of this gas pipeline is wrong.

“Europe has come up with its own rules of the game, believing that different gas suppliers will run to it.

Due to competition, the price of fuel should go astray, but, as we can see, a completely different picture is observed, "said Alexander Frolov, deputy general director of the Institute of National Energy, in an interview with RT.

"The stupid nature of the accusations"

As a reminder, following the results of the elections to the Bundestag, which took place at the end of September, the Greens, led by Berbock, took third place, which allowed them to take part in the formation of the new Cabinet of Ministers of the Federal Republic of Germany.

Some political scientists call this party, as well as some other opponents of the SP-2 from among the German establishment, "enemies of the German economy."

“In principle, the Germans themselves must decide how to relate to such statements.

The Greens had quite a lot of electoral support, but still the forces that understood the importance of the pipeline and the stupid nature of the accusations against Russia won, ”Frolov said.

It should be noted that on the eve of the winter period, Europe is experiencing a serious energy crisis caused by the explosive growth in exchange prices for gas and its shortage in storage facilities.

Annalena Berbock's statement about Moscow's responsibility for the crisis is far from the only attack of this kind on the part of the Western media and state officials.

For example, Amos Hochstein, senior adviser to the US State Department for energy security, made similar statements earlier.

In September, in an interview with Bloomberg Television, he said that Gazprom allegedly deliberately does not pump more gas through Ukraine, thus creating a shortage of this energy resource in Europe.

According to Hochstein, the EU storage facilities are less than 72% full, although a level in the region of 90% is considered normal for the fall.

The current volume of blue fuel in the European Union is the lowest for the fall in the last decade.

At the same time, according to Hochstein, Moscow refuses to reserve additional volumes of transit through the Ukrainian GTS because of the desire to launch Nord Stream 2.

In August, similar accusations were made in Kiev.

According to the head of the state-owned company Naftogaz Ukraine, Yuriy Vitrenko, Russia is “blackmailing Europe” by creating an artificial shortage of blue fuel.

Other opponents of Nord Stream 2 adhere to a similar point of view.

In particular, Polish President Andrzej Duda believes that the exploitation of the highway, laid on the bottom of the Baltic Sea, can provide the Russian Federation with "opportunities for strategic blackmail of our entire community, blackmail that goes far beyond energy issues."

However, according to political analysts, it is not necessary to say that Europe as a whole has developed a unified position on the current situation.

For example, Klaus Ernst, chairman of the German Bundestag's Committee on Economics and Energy, believes that Russia has nothing to do with the price rally in the gas market.

Moreover, according to the deputy, the earliest possible launch of SP-2 can help reduce the cost of natural gas in Europe.

At the same time, the head of the European Commission, former Minister of Defense of Germany Ursula von der Leyen insists that the EU should reduce purchases of Russian gas.

She sees the way out of the crisis in accelerating the development of the so-called green economy.

According to the politician, the growing dependence on Russian supplies makes Europe "vulnerable".

EU High Representative for Foreign Affairs and Security Policy Josep Borrell, during a press briefing on October 18, in turn, refrained from direct accusations against the Russian Federation, but stressed that the current rise in prices for natural gas has “deep geopolitical roots and is part of the geopolitical struggle ".

According to Alexander Frolov, statements by Western media and politicians that the energy crisis broke out allegedly through the fault of Russia are devoid of reasonable grounds.

The expert is sure that the true reasons for the current difficulties in Europe lie in the policies of Brussels.

“What complaints can there be against Gazprom, which flawlessly follows all its obligations and, like any company, tries to increase profits by selling products where the price is higher?

In my opinion, Europe simply does not want to admit that it is reaping the fruits of its self-confidence, its desire to alienate Russia and, if possible, impose its own terms of cooperation on it, ”says Frolov.

"Way out of the impasse"

Moscow, in turn, has repeatedly denied any claims about responsibility for the energy crisis in Europe.

In mid-October, in an interview with RT on the sidelines of the Russian Economic Week, the Deputy Head of the Ministry of Energy of the Russian Federation Pavel Sorokin said that the price rally and the shortage of blue fuel in Europe were provoked both by market conditions and by the actions of the EU authorities.

“The increased volatility in the European gas market was partly caused by the decisions of the regional authorities in the framework of the energy transition policy, and partly by the prevailing conditions in the industry,” Sorokin said.

According to him, Europe did not receive a significant amount of gas due to the fact that the producing states exported large volumes of this fuel to South America and Asia, where “the price and demand were higher”.

“Plus the factor of energy transition in Europe was added to this.

A large number of renewable energy sources (RES) in the energy balance of the EU countries and calm weather have led to the result that we are now seeing.

That is, the situation should be looked at in a complex manner, ”Sorokin emphasized.

Speaking at the plenary session of the 18th meeting of the Valdai International Discussion Club, Russian President Vladimir Putin said that the volume of gas deficit in the EU could amount to about 70 billion cubic meters.

According to him, "Russia has nothing to do with it."

The current situation, from the point of view of the Russian leader, is "a man-made result of the economic policy of the European Commission."

“The entire philosophy of the European Commission in recent years has been aimed at regulating the energy market, including gas, through the exchange, through the so-called spot.

And we were convinced of the need to abandon the so-called long-term contracts, the prices of which are tied to the exchange, by the way, to market quotations for crude oil and petroleum products, ”Putin explained.

According to Putin, Brussels switched to spot mechanisms, considering its market as "premium", but further developments showed that it is more profitable for producing countries to export gas to Asia and Latin America.

The Russian leader sees the way out of the energy crisis in expanding the practice of concluding long-term contracts with Gazprom - prices in such transactions are less subject to exchange fluctuations.

As Vladimir Putin said, now European companies that work under long-term agreements receive blue fuel at a price four times lower than the current one.

One of these contracts was signed at the end of September between Gazprom and Hungary.

The deal provides for gas supplies by the end of 2036.

The cost of a cubic meter of energy has not been disclosed, but, as reported in Budapest, it is more profitable than the one that was fixed in the previous agreement.

Another way to solve Europe's problems, according to Putin, is to launch Nord Stream 2.

The Russian leader stressed that Europe itself is holding back the start of a full-fledged commercial operation of the pipeline.

“By the end of this year, in the middle - at the end of December, the technological work on filling the second gas pipe of Nord Stream 2 will be completed.

In total, this is 55 billion cubic meters.

If we bear in mind that the deficit on the European market, according to our calculations, will be 70 (billion cubic meters. -

In a commentary to RT, Alexander Kamkin, a leading researcher at the Center for German Studies at the Institute of Europe of the Russian Academy of Sciences, stated that Berbock and other opponents of SP-2 are trying to ignore the fact of commercial benefits from the launch of the pipeline and the conclusion of long-term contracts with Gazprom.

The expert believes that this behavior is dictated by the desire to support anti-Russian sentiments in Europe.

“It is difficult for the EU to recognize the shortcomings of spot mechanisms, which allow saving during a period of price calm and, at the same time, are not designed for situations when the market is overheated and there is a shortage of gas.

I think that Moscow is now acting pragmatically.

Yes, Russia speaks directly about the importance of the full-scale launch of SP-2, but this highway is not a political weapon, it is a way to get out of the impasse in which the EU finds itself, "Kamkin summed up.