"All known signals are suppressed": what is the peculiarity of the newest Russian antidrone gun

In Russia, factory tests of the LPD-801, a compact suppressor of communication channels and data transmission from unmanned aerial vehicles, have been completed. This was announced to RT by Denis Oslomenko, general director of the PPSh Laboratory development company. In outline, this anti-UAV weapon resembles a standard army small arms. Moreover, the accumulators of the antidrone gun are made in the form of magazines for the Kalashnikov assault rifle and are carried in pouches that are in any modern outfit. With the help of an electronic pulse, the LPD-801 is capable of disabling small-sized drones at a distance of up to 1-1.5 km. According to experts, the power structures of the Russian Federation are in dire need of such a product, which often have to counteract UAVs. 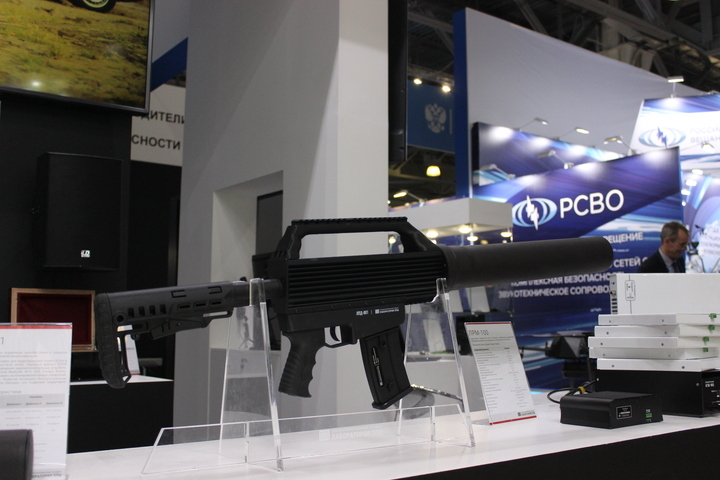 Denis Oslomenko, general director of the PPSh Laboratory (counteraction to industrial espionage), told RT about the completion of factory tests of the LPD-801 antidron gun.

According to him, this means of countering drones was created taking into account the wishes of the military.

“We have completed the so-called factory tests of our new suppressor of communication channels and data transmission from UAVs.

During the development process, we focused on the recommendations of the military.

To a greater extent, LPD-801 was created specifically for their needs, ”Oslomenko stressed.

The general director of the PPSh Laboratory said that the enterprise plans to test the effectiveness of the weapon in various climatic conditions, including extremely low temperatures.

“I think that LPD-801 will show itself very well.

The fact is that, in principle, we have created an unpretentious means of dealing with UAVs.

For example, the antenna mount is very reliable, in general, there are a minimum of protruding parts in the product.

The gun has a folding stock, it can be safely thrown into a pickup truck and transported along with other weapons without worrying about safety, ”Oslomenko said.

The RT interlocutor also referred to the main advantages of his brainchild as compact size and the ability to quickly replace the battery, which is made in the form of a standard magazine from a Kalashnikov assault rifle.

The battery can be charged both from the mains and from a conventional car "cigarette lighter".

“We tried to make the LPD-801 as convenient as possible.

They fit into the usual AK horn pouches, which are found on any modern outfit.

The operating time of one "store" in the suppression mode (signals -

) is one hour, "added Oslomenko.

PPSh Laboratory is a private St. Petersburg company that specializes in countering industrial espionage and works closely with the law enforcement agencies of the Russian Federation.

LPD-801 belongs to the class of electronic warfare (EW).

In recent years, this type of weapon has been widely used in the Russian army to combat drones.

The PPSh Laboratory booklet says that the LPD-801 is designed to “disrupt flight” of drones in restricted areas.

The length of the antidrone gun is a little less than one meter.

The maximum radiation power that affects the electronic equipment of the UAV does not exceed 10 W.

According to the "PPSh Laboratory", this size is enough to disable practically any small-sized aircraft that are currently actively used by illegal armed formations (IAF).

The range of the antidron gun suppression impulse can reach 1-1.5 km.

At the same time, according to the developer, his brainchild is distinguished by the lowest price among Russian and foreign counterparts.

LPD-801 was developed on the basis of the previous model, index LPD-800.

According to RT, the head of the development department of the PPSh Laboratory, Dmitry Ashevsky, the previous antidrone gun was tested by Russian and foreign military personnel.

Based on the results of testing, LPD-800s were supplied to the security forces of the United Arab Emirates (UAE), and the development of an improved modification was started for the needs of the domestic troops.

“The main differences between LPD-801 and LPD-800 are that the new model is equipped with a compact triune antenna.

It is more advanced - the product has the ability to block navigation channels and intercept control of the UAV, ”Ashevsky explained.

As the specialist said, it is enough for a soldier to point the antidron gun into the flight zone of the intruder drone.

LPD-801 can operate in manual and automatic modes.

The latter saves the fighter from having to hold the trigger for a while.

“The impact on the drone is either instantaneous or achieved within a few minutes.

The principle of operation of the LPD-801 is that the generator sends noise interference (a kind of electronic pulse. -

) to the antenna, and that already affects the UAV, ”Ashevsky said.

LPD-801 is equipped with a Weaver rail - a rail device designed to mount sights, laser designators, bipods and handles.

There are various devices for this.

For our part, we offer a range of Legat sights that allow you to see the drone, ”Ashevsky added.

According to a representative of the "PPSh Laboratory", servicemen armed with LPD-801 are capable of creating a perimeter that will allow protecting a protected object or a certain territory.

However, for more effective and simple counteraction to small-sized UAVs, the company has developed a module for suppressing satellite navigation signals LGSH-600 "Cylinder".

The technological architecture of this electronic warfare facility is similar to that of the LPD-801 antenna.

Like the antidron gun, the principle of operation of the "Cylinder" is based on the generation of a noise signal.

This product can be controlled remotely, the developer estimates the range of the remote control channel at 500 m.

Thanks to the powerful accumulator unit "Cylinder" is able to work continuously for at least three hours, and in standby mode - at least 10 hours.

The length of the product is no more than 0.49 m, the weight is within 0.95 kg, the maximum distance of impact on the UAV is 1 km.

“If it is required to“ close ”a certain area (from the penetration of drones. -

), then the“ Cylinder ”is most suitable.

These devices can be installed anywhere without worrying for several hours, ”Ashevsky said.

Experts believe that the uniqueness of the LPD-801 lies primarily in the small-sized antenna, which provides compactness and convenience during transportation, carrying and using the gun.

Other such electronic warfare means are often larger and heavier, although in terms of effectiveness they are roughly equivalent to the LPD-801, Alexander Butyrin, columnist for the Fire Frontier magazine, noted in a commentary to RT.

“The fact is that a soldier can carry this antidrone gun like a conventional small arms, that is, carry it in his hands or on a belt, sling it over his shoulder.

It is not bulky at all, it is quite easy to use.

LPD-801 is generally one of the first developments in the world in the segment of truly compact anti-UAV countermeasures, ”Butyrin said.

According to Butyrin, Russian and foreign law enforcement agencies “lack” a compact and unpretentious antidron gun in their arsenal.

“Today, there is a huge number of drones in the civilian market.

The availability of these technologies makes it possible to refine drones and use them en masse both for hooliganism and for military purposes: for reconnaissance, sabotage, terrorist attacks.

At the same time, there are still few cheap and compact means of eliminating such threats.

According to the expert, it is too expensive to deal with small aircraft with standard air defense systems.

In addition, in urban environments, non-lethal weapons are often required that could be guaranteed to counter intruder drones.

The founder of the Military Russia portal Dmitry Kornev adheres to a similar point of view.

In a conversation with RT, he said that the domestic industry is quickly adapting to changes in the theater of operations, offering law enforcement agencies new solutions in the field of combating UAVs.

“In my opinion, the stimulus for our companies was the Syrian operation, where militants used kamikaze drones, drones carrying small explosives and reconnaissance drones, and the UAV attack on Saudi Aramco facilities in September 2019, which caused a huge resonance around the world.

It became clear how insidious weapons civilian and handicraft drones can be, ”said Kornev.

The expert called the development of an unpretentious and highly efficient small-sized antenna for the LPD-801 as a key merit of the specialists of the PPSh Laboratory.

According to Kornev, the miniaturization of such an important element made it possible to manufacture electronic warfare equipment in the dimensions of a standard machine gun and an assault rifle.

“From my point of view, LPD-801 and other similar products are best suited for use in urban environments.

In the army or law enforcement agencies, the antidron gun will be in demand during special operations, because now very often it is necessary to disable enemy UAVs.

Judging by the available information, the new antidrone gun is well adapted to such tasks, ”concluded Kornev.