"A day of mourning has been declared": what is known about the explosion at a plant in the Ryazan region

According to the latest official data, 16 people became victims of the explosion at the plant in the village of Lesnoye, Shilovsky district of the Ryazan region, which occurred on the morning of October 22. The exact cause of the incident is being established. The UK opened a criminal case into the incident. As RT found out, in recent years, the regulatory authorities have identified serious violations of safety rules at the enterprise several times. 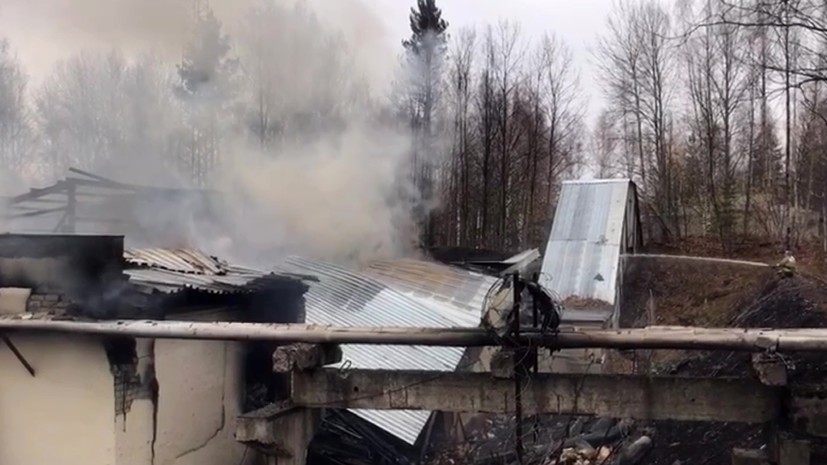 According to the latest official data, 16 people became victims of the explosion at the plant in the village of Lesnoye, Shilovsky district of the Ryazan region, which occurred on the morning of October 22.

The information on the death toll was confirmed by the assistant to the head of the Russian Ministry of Health Alexei Kuznetsov.

According to the Ministry of Emergency Situations, information about the incident was received at 08:22 Moscow time.

As told in the Investigative Committee, the fire took place on the territory of the Federal State Unitary Enterprise "Plant of synthetic fibers" Elastic ", in the premises used by LLC" Razryad ".

On the fact of the incident, a criminal case was initiated under Part 3 of Art.

217 of the Criminal Code of the Russian Federation (violation of industrial safety requirements for hazardous production facilities, resulting in the death of two or more persons by negligence).

On behalf of the head of the department, Alexander Bastrykin, criminologists were sent to the region, the investigation of the case was entrusted to the Main Investigation Department of the Central Office of the Investigative Committee.

“The investigation is considering various versions of the causes of the fire.

It will be possible to speak unambiguously about the reasons for what happened after a number of examinations have been carried out, ”the department noted.

"We are talking about a private company OOO Razryad, which is a civilian enterprise for the production of industrial explosives," a RT source in the region's prosecutor's office explained.

The head of the regional administration Vladimir Lukantsov said that the plant is located at a distance of about two kilometers from the village.

Acting head of the Russian Emergencies Ministry, Alexander Chupriyan, also arrived at the scene of the incident, together with the operational group of the department's central office.

After inspecting the site of the explosion, he held a meeting with representatives of the government and law enforcement agencies in the region, at which the organization of emergency rescue operations was discussed.

The Ministry of Emergency Situations clarified that open burning at the site of the fire was eliminated.

In addition, Chupriyan noted that there are several tons of saltpeter in the shop, but it does not pose a threat.

He clarified that experts dilute it with water, thereby excluding the possibility of a second explosion.

Also on russian.rt.com 16 people became victims of explosion at a plant in Ryazan region

The official representative of Rostekhnadzor, Andrei Ville, specified that in the near future the department will begin an examination of a survey of the organization's employees.

In turn, a resident of the village of Lesnoy told RT that all those killed in the explosion had children.

“We have the whole village on our ears.

The eldest daughter Victoria is 17 years old, the youngest Sophia is eight.

Vika and I go to trainings together.

Alpatov's son is my former classmate.

Graduated from school with a medal.

At the same time, the governor of the Ryazan region, Nikolai Lyubimov, expressed condolences to the relatives of the victims and promised to provide them with the necessary assistance.

“Already now I can say that the families of the victims will be allocated 1 million rubles each,” he said.

The head of the region added that on October 25, a day of mourning for the victims was declared in the region.

He instructed to cancel all recreational activities that day.

“October 25 in the Ryazan region will be declared a day of mourning.

All entertainment events should be canceled, flags should be lowered on the buildings of TsIOGV, administrations of cities, districts, villages, "Lyubimov said.

As RT found out, in recent years, the regulatory authorities have identified serious violations of safety rules at the Razryad.

Thus, according to the Kontur.Fokus database, in 2019, violations related to fire safety were discovered at the enterprise - according to available data, employees do not carry out the necessary inspection of electrical equipment and networks.

In addition, according to the prosecutor's office, workers at the enterprise used unsafe tools during production.

The Elastic enterprise was reportedly founded in 2000 and was engaged in the production of weapons, ammunition and explosives.

In 2015, bankruptcy management was introduced.

The plant is currently selling the property, the last sale and purchase agreement was concluded on October 21, 2021.

According to SPARK-Interfax, the courts are considering three more arbitration cases in which the plant is involved, the enterprise has debts in taxes: over the entire period of work, 178 enforcement proceedings were instituted against it for taxes and fees in the amount of more than 812 million rubles.

In addition, in 2006, the management of the pension fund of one of the districts of the Ryazan region applied to the court with an application to recover from the plant the arrears of insurance contributions for compulsory pension insurance for 2005 in the amount of more than 4 million rubles.

and penalties in the amount of more than 1 million rubles.