Huge crowds of demonstrators broke out in separate areas of the Sudanese capital, Khartoum, and other cities today, Thursday, in protests to reject military rule. 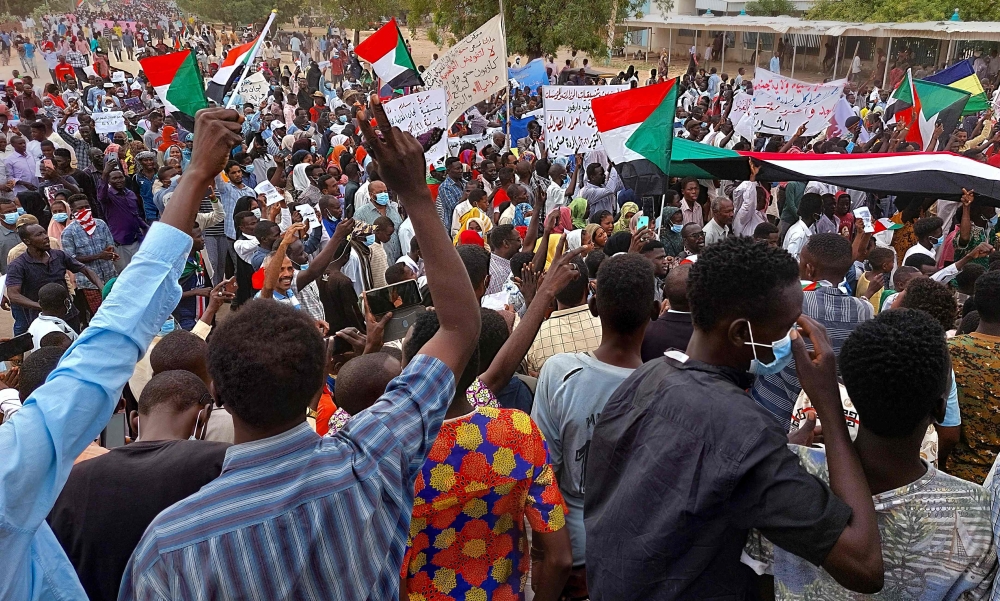 Huge crowds of demonstrators broke out in separate areas of the Sudanese capital, Khartoum, and other cities today, Thursday, in protests against the military rule.

The army has shared power with civilians in a transitional authority since ousted President Omar al-Bashir was ousted in 2019 in a popular uprising after three decades in power.

A coalition of rebel groups and political parties allied with the army, which accused civilian parties of mismanagement and monopolizing power, and sought to dissolve the cabinet.

Civilian leaders say this would amount to a coup and say the military aims to install a government it can control.

Today's demonstration took place on the anniversary of the October 21, 1964 revolution, and was preceded by protests in small neighborhoods for days.

Reuters journalists put the turnout in the hundreds of thousands, making it the largest demonstration during the transition period.

Plumes of smoke were seen as protesters burned tires and waved Sudanese flags.

In their chants, the demonstrators criticized the head of the ruling Sovereign Council, Lieutenant-General Abdel Fattah al-Burhan, and accused him of loyalty to al-Bashir.

Some demanded that the leadership be handed over to civilians, others demanded his removal.

A number of government ministers were seen walking in different parts of Khartoum.

Sovereign Council member Siddiq Tower, one of the many civil officials who supported the protests, wrote on Twitter, “October 21 is a lesson for everyone who is most interested in turning the wheel of time backwards from tyrants, remnants and opportunists. Together, in order to complete the requirements of the transitional period, completely and uncompromised...

The Khartoum Neighborhood Resistance Committees said in a statement that they protested the entire power-sharing agreement and demanded a single civilian rule.

Many shops in central Khartoum were closed in anticipation of the protest and the police deployed heavily.

The military says it is committed to a transition to democracy and elections at the end of 2023.

Prime Minister Abdalla Hamdok, who heads the cabinet under a power-sharing agreement between the military and civilians, remains popular despite the economic crisis.

He said he was talking to all sides in the crisis in order to find a solution.

Protest routes were planned in different areas away from the downtown area to avoid confrontation with the pro-army sit-in.