La Palma's map needs to be redrawn after the volcanic eruption

La Palma's map will need to be redrawn after the extensive volcanic eruption. The lava has formed a new peninsula that in the future may be used for housing or agriculture. - This will be a good addition to the land surface, which is otherwise very steep, says Steffi Burchardt, volcano researcher at Uppsala University. 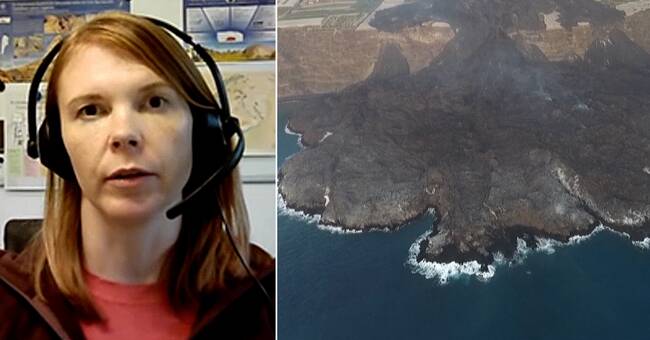 The volcanic eruption on the Spanish island of La Palma, which has been going on since mid-September, has caused extensive devastation.

Thousands of people have been evacuated to neighboring islands while large rocks, gas clouds and lava have destroyed both housing, agriculture and infrastructure, something that is expected to take several years to rebuild.

The outbreak is expected to continue for some time to come.

But already now it is clear that the island has changed fundamentally.

The lava that has flowed into the sea has so far expanded the land area by 36 hectares - which means that the island's map will need to be redrawn.

- You actually have to redraw the map now.

The circumference of the island has changed and is still changing, says Steffi Burchardt, volcanologist at Uppsala University.

Although the volcanic eruption and lava has caused a catastrophe for those affected, it also has benefits, according to Steffi Burchardt.

- The disadvantages are of course that the lava flow has destroyed over 1000 houses nowadays and that you need to build up the infrastructure.

But in the long run there are no disadvantages to the formation of new land, this is how volcanic islands grow.

Land is precious on volcanic islands and that is exactly how they have developed in the past.

For the population and biodiversity, this is good news, she says.

The Canary Islands, which include La Palma, have been hit by several volcanic eruptions over the years.

The largest occurred in La Palma in 1949, which also resulted in the creation of a record-breaking new land area, which was covered with fertile soil from other parts of the island.

- La Palma in particular has a lot of space that is very mountainous and difficult to use for cities and agriculture.

The new land that is being formed now is quite flat, so this will be a good addition to the land surface, which is otherwise quite steep, says Steffi Burchardt.