Election campaign in Chile in a busy political context 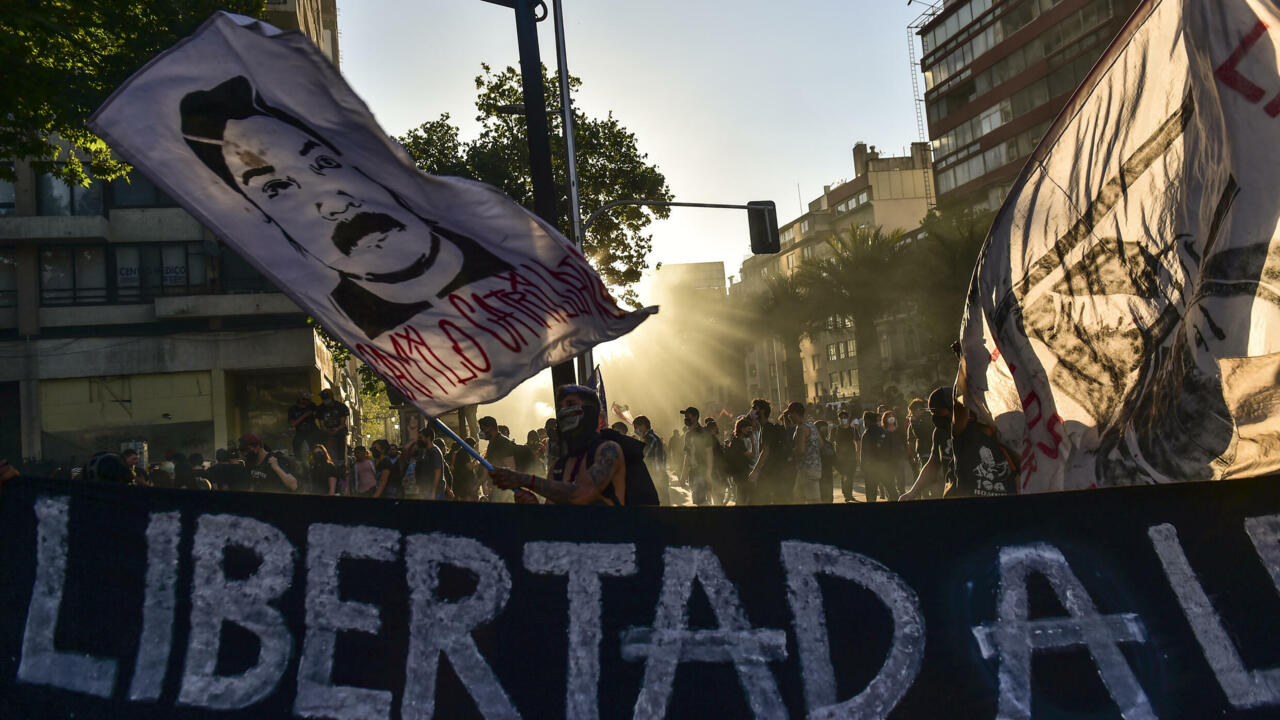 Election campaign in Chile in a busy political context

Demonstration of October 18, 2021 to defend the same demands as in 2019. Martín Bernetti AFP

The legislative and presidential elections which will take place in a month in Chile will be the first since the protest movement of October 2019 against inequalities and will take place in a particular context: a Constituent Assembly is in the process of drafting a new Constitution, to replace that inherited from the dictatorship of General Pinochet.

The outgoing president, him, can not present himself again, and he is under the blow of a procedure of impeachment after the scandal of "Pandora Papers".

From our correspondent in Santiago

This Monday, October 18, in Santiago tens of thousands of people commemorated

the second anniversary of the social movement of October 2019

. Andrea Briceño, in her forties, came with her whole family to protest against the deep inequalities that persist in the country. She takes up slogans against the current president, the right-wing billionaire Sebastián Piñera, indicted for corruption after being cited in the

A thief and a murderer cannot stay in power. He's like Pinochet, he's an assassin

”. Because under her government, she explains, the social movement was severely repressed. Today, she is not convinced by any of the presidential candidates.

Evelyn, another protester, will vote for Gabriel Boric, a former leftist student leader.

Because this young deputy is the most favorable to social movements and to the work of the Constituent Assembly, she said: "

More in the center, a Christian Democrat senator, Yasna Provoste, hopes to benefit from the difficulties of a third candidate, Sebastián Sichel, supported by the right-wing coalition in power.

He teaches at the University of Chile: “

Sebastián Sichel, the candidate of the current president

, even if he tries not to be too close to him, because he has a very low popularity even lower with the Pandora Papers who directly mentioned it, has a campaign in free fall right now ”.

José Antonio Kast, ultra-nationalist and defender of the Pinochet dictatorship

The one who seems to benefit the most from this situation is the far-right candidate José Antonio Kast, who was attending a conference this Tuesday at the very conservative University of the Andes, where he was warmly received. "

He's very popular [at this university],

" and the majority of students on campus will vote for him, says Isabela Sepulveda, 21.

Former senator, José Antonio Kast had made 8% in the presidential election of 2017. And during his campaign, he declared "

If Pinochet were still alive, he would vote for me

A sentence that does not bother Juan Andrés Rosales, met on campus.

He also supports the candidate's idea of ​​digging a trench on the northern border of Chile to prevent the arrival of Latin American migrants: "

I think it would be a good thing, because Chile is filling up with a lot. people who come from other countries and who take our work from us.

So this proposal is important for Chile.

► To read also: Chile: the presidential campaign starts with a first debate

José Antonio Kast also plays on the fear concerning the economic and social reforms proposed by the left.

Here is what Juan Andrés thinks: "

Gabriel Boric wants us to look like Venezuela, that's what his campaign suggests

For the researcher Antoine Maillet, two main challenges await the future president: the immense mistrust of the Chileans towards the political class.

And then the announced transition to a new Constitution.

A right-wing or far-right president could put a spoke in the wheels of the Constituent Assembly.

A leftist president, on the contrary, would probably try to promote the adoption of the new Constitution, which promises to be closer to a social democratic model.

The second round of the presidential election is scheduled for December 19.

The Constituent Assembly, mostly on the left, still has nearly eight months to draft a new Constitution, which will then be submitted to a referendum.

Commemoration of the social uprising in Chile: demonstrations with the same demands