A man in his 40s did not call an ambulance after another man died of an overdose - instead he dumped his body at a forest road in Töre and left a note to the police. The trial against the man suspected of violating the peace has now begun. 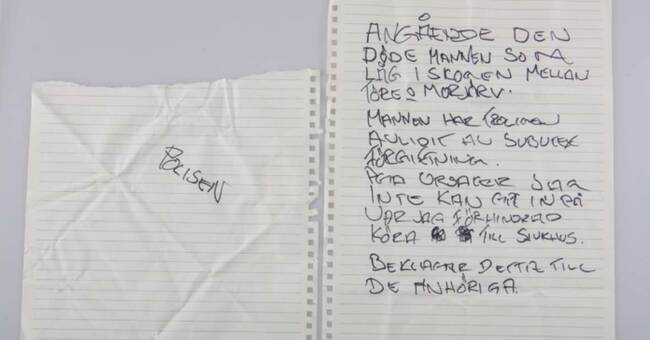 At the end of November 2019, a man and a woman turned onto a forest road in Töre to pee, but by the road there was a pile of clothes.

When the man later walked forward in the snow and looked more closely at the pile of clothes, he saw that there was a man lying there.

A police patrol that arrived at the scene was then able to establish that there was a dead man under a frozen blanket.

The deceased turned out to be a man in his 25s living in Haparanda.

After an autopsy, it was clear that the man had died from an overdose of Subutex.

The police launched a murder investigation and a few days after the body was found, a handwritten note with information about the death was left to the police in Haparanda.

The note read: “Due to reasons I can not go into, I was prevented from driving to the hospital.

I apologize to the relatives ”.

Via telephone masts, the police were then able to link a man in his 40s to the incident.

Before November evening, the man had lived with the deceased at a residence in Haparanda.

The body was left by a forest road

According to the man, he and two other people had picked him up in Stockholm.

By car, the four would later during the night drive the 100 miles from Stockholm to Haparanda, but during the trip, the others discovered that the man in his 25s was dead.

Instead of calling for an ambulance, the deceased was left by a forest road.

According to the man in his 40s, it was because he panicked.

The trial against the man who is suspected of violating the peace of peace starts on Wednesday, the man denies the crime.