In the center of Damascus, there was an attack on the Syrian military - a bus carrying soldiers was blown up. As a result of the terrorist attack, 14 people were killed, and several more were injured. The head of the Syrian Interior Ministry promised to pursue the terrorists who carried out the explosion. According to experts, the attack is aimed at destabilizing the situation in the SAR. The incident took place against the backdrop of the sixth round of discussions on constitutional reform in Syria that started on October 18 in Geneva. 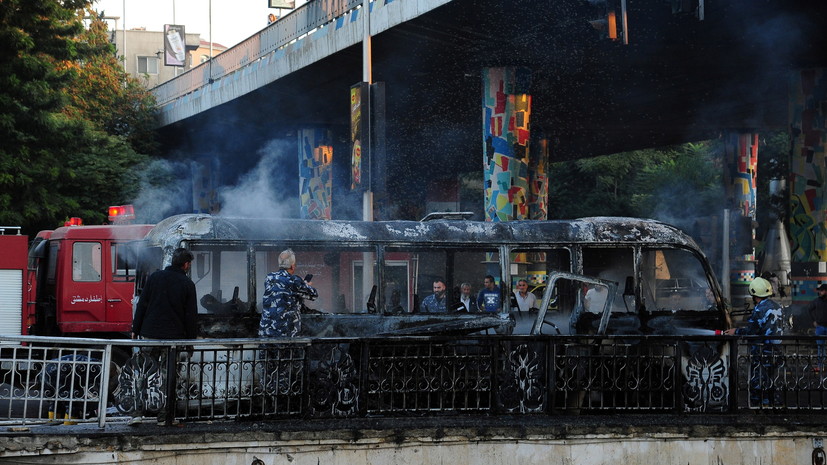 On the morning of Wednesday, October 20, a terrorist attack took place in Damascus, which killed at least 14 people.

According to the command of the Syrian army, as a result of the incident, Syrian soldiers were killed.

), while an army bus was passing in Damascus near the Rais Bridge, a terrorist attack was carried out.

Two explosive devices detonated, which were previously attached to the transport.

As a result, 14 servicemen were killed and several were injured, ”RIA Novosti quotes the text of the message.

In addition, a sapper squad defused a third explosive device that was installed on the bus.

The Rais Bridge, also called the Presidential Bridge, is located in central Damascus near the National Museum and the Dama Rose and Four Seasons hotels.

The Minister of Internal Affairs of Syria, Mohammad al-Rahmun, on the air of the state television channel Syria TV, promised that the security forces will "pursue the terrorists who committed this explosion, wherever they are."

As noted by the Al-Mayadeen TV channel, a terrorist attack of this nature (with the use of explosives) was the first in the Syrian capital since 2018.

This terrorist act is an attempt to destabilize the situation in Damascus, says Vladimir Olenchenko, senior researcher at the Institute of World Economy and International Relations of the Russian Academy of Sciences.

“Damascus is doing painstaking and constant work to bring the country back to a peaceful life.

There is also a subtext for foreign states here.

If countries are interested in normalizing the situation, they will treat this as a terrorist attack and will give an appropriate condemning assessment.

If they remain committed to maintaining tensions in and around Syria, then a comment that is not very pleasant for the Syrians can be made.

This is a kind of litmus test of how other countries treat the establishment of peace and the continuation of the peace process in Syria, "the expert emphasized in an interview with RT.

According to political scientist Yuri Svetov, the attack on the Syrian military was carried out to destabilize the situation in the SAR.

“Opponents of finally settling and peace in Syria will act in different ways. With this terrorist attack, they say: "You claim that you control a significant part of Syria, and you see, even in Damascus you cannot stop this kind of action." This signal is quite serious, I would even say, ominous. We need a reaction from both Syria and the international community, "said the interlocutor of RT.

Note that the terrorist attack took place against the background of the sixth round of discussions on constitutional reform in Syria that started on Monday, October 18, at the UN headquarters in Geneva.

It is expected that the session with the participation of a small group of the constitutional committee, consisting of 45 experts (15 each from the government, opposition and civil society) will last at least a week.

As pointed out by the UN Secretary General's special envoy for Syria Geir Pedersen, within the framework of the meeting, the process of developing a draft constitutional reform of the SAR should be launched.

At the same time, the Russian president's special envoy for Syria, Alexander Lavrentyev, said that Moscow welcomes the resumption of the work of the constitutional committee in Geneva after a nine-month break.

He also expressed the hope that the parties will be able to reach an agreement.

“Of course, we have certain hopes that we will be able to overcome the previous difficulties, start working on the constitution itself and reach certain agreements. The same signals come to us from Pedersen's office - that there are grounds for this, at least this was the mood of the delegations during all the preliminary consultations that Mr. Pedersen held with pro-government and opposition delegates, "TASS quotes him.

Last month, a similar terrorist attack took place in the province of Homs, the victim of which was a Russian soldier.

On September 9, a car was blown up "during a reconnaissance by the Russian military police of the route of a humanitarian convoy."

As a result of the explosion, a Russian serviceman was seriously injured, despite the medical assistance provided, he died.

As indicated in the Ministry of Defense, the family of the deceased will be provided with all the necessary assistance and support.

"For courage and courage shown in the performance of military duty, to award the Order of Courage to Lieutenant Colonel Alexei Alekseevich Schneider, deputy commander of military unit 38643 of the Northern Fleet, Murmansk region (posthumously)," the decree says.

In addition, a report from the UN Human Rights Office was presented on September 24, which provides data on the "minimum verifiable number" of victims of the conflict in Syria, since the actual death toll is much higher.

“We have compiled a list of 350,209 identified persons killed during the conflict in Syria from March 2011 to March 2021,” said UN High Commissioner for Human Rights Michelle Bachelet, stressing that 26,727 women and 27,126 children were among the dead.