Marta Russo: on Rai2 the documentary "Marta - the crime of Sapienza"

A story through the pages of the diaries of the Sapienza student, found by her sister Tiziana a few years after the murder 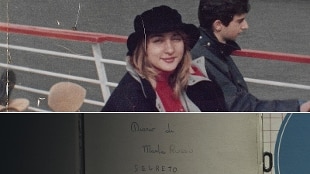 19 October 2021 A documentary to "tell the world about the life of Marta Russo and no longer just her death".

This is how Tiziana Russo, sister of the student killed in 1997 at the age of 22 in an alley of La Sapienza University in Rome, introduces "

", a co-production of Rai Documentaries and Minerva Pictures, produced by Gianluca Curti and Santo Versace, directed by Simone Manetti, premiered on Thursday

and available on RaiPlay.

For the first time we talk about Marta Russo starting from her words, from her diaries, found by chance by her sister Tiziana a few years after the murder.

"It is a documentary that arises from the challenge of starting from a painful act like death to tell the story of life, instead of following the usual

", explains the director Manetti during the presentation press conference, at the Sala degli Arazzi of the Rai, in the presence of the girl's family, the Undersecretary for Sport, Valentina Vezzali, and the Rai Documentary Director, Duilio Giammaria.

"An emotional story - adds the director - to really tell who was behind Marta's photo. We approached all the repertoire material and the Rai display cases, essential for reconstructing the social aspect of those years. 'is the most intimate family repertoire, the photographs and the cornerstone of the project which are the secret diaries of Marta: a means not so much to tell a person but to try to get as close as possible to her, as if it were the person himself to tell about himself " .

A documentary, written by Emanuele Cava, Gianluca De Martino and Laura Allievi, with the participation of Silvia D'Amico who gives the voice to Marta and the supervision of Fabio Mancini.

A narrative journey that unfolds on two parallel story levels: the one linked to the news events, which reconstructs the legal matter and the private, intimate one of Marta, which comes to life directly from her deepest thoughts, from the hopes and dreams that, between 1985 and 1996, he entrusted the pages of his secret diaries. The documentary wants to give back her identity, her life before it was taken from her. Her voice, first of all: it is she, in fact, who accompanies us on the journey, talking to us about who she was, telling us what she really experienced.

A bittersweet memory guarded by his family and shared today: "I want to be happy in this life, and not in the future, but in the present, for every moment I live. Because I don't know how long I will be able to live and what will be next", an extracted phrase from the diary of Marta Russo.

The documentary uses precious repertoire material, partly never made public, both for the investigative aspect and for the personal and family one. Access to the archives of the Assize Court of Rome and the State Police made it possible to draw on materials, even unpublished, relating to the proceedings of the trial such as environmental and telephone wiretapping, video footage of interrogations with key witnesses of the investigation, photographic files of the Scientific police, and the unprecedented phone call to 113 occurred at the time of the shot.

The repertoire made available by Rai Teche is also consistent: newscasts, interviews with key witnesses, and above all hours and hours of raw footage relating to the trial of Giovanni Scattone and Salvatore Ferraro, which was drawn on to reinforce "the truth story".

As for the personal aspect of Marta, however, the documentary was able to count on her precious diaries, made available by her relatives: 9 notebooks, about 700 pages written in about 11 years. In addition to these, photos, family films and the objects that her bedroom was full of and that speak of her, such as the trophies won for fencing. To these are added the reconstructions and testimonies of those who loved it.

A story in which the emotional and personal narrative line is intertwined with the lucid, dry and rigorous one of the investigation. To accompany the viewer is always the voice of Marta who seems to ask to go further, to speak also of the after, to examine from the beginning to the end what happened after her death, recounting the investigations and the many unresolved knots, which still, after 24 years old, they lead to the same unanswered questions: Why was she killed? Where is the gun from which the fatal shot was fired? Does the third man really exist? What is the truth?

The documentary is the first appointment of Crime Doc, a new cycle of five first evenings of Rai Documentaries dedicated to crime, to the story of the great news stories that have marked our country such as the crimes of the White One, the murders of the Monster of Florence , the revolt of the Portoferraio prison.

Rai Documentari is the structure founded in January 2020 under the guidance of Duilio Giammaria who, during the press conference, recalled how "a good documentary must know how to connect a news story to the life of each of us. It is a work that balances the excesses of the spectacularization of the news "and thanked the Russo family for their willingness" to work together, to restore a human context to this story ".