Gualtieri: "Government friend of Rome, there will be resources"

"Let the government work as it always does. Then we will talk about the Jubilee and Governance", says the newly elected 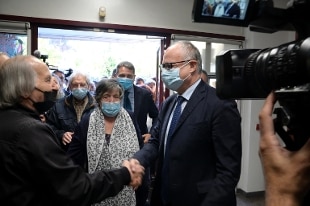 October 19, 2021 "Careful, watch your back, here it is full of pitfalls", is an elderly lady, between the serious and the ironic, who welcomes Roberto Gualtieri, elected mayor of Rome, in his first outing on the city territories.

The new tenant of the Campidoglio has chosen the Tiburtino III elderly center, a social housing area close to Via Tiburtina, for its first public release. To welcome him a hundred users of the structure who greet Gualtieri with applause and a chorus 'mayor of Rome'.

Gualtieri spent over an hour discussing with the elders of the center, listening to their problems and their questions. "We had said that we would leave the suburbs to stay there, to be in contact with the neighborhoods that are not well kept. I said that we will immediately make a reform to be able to start with the modernization of public housing. Then there is the theme of elderly centers: reopen them, support them, exchange ideas between elderly and young people ", said the former Minister of Economy at the end of the visit.

And in the middle he answered a few questions.

"When will I meet Draghi? Soon. Now the government is committed to the budget law which, as you know, is also very important for Rome", underlined Gualtieri who concluded: "There will be resources for the Jubilee as we have requested and as we knew that the government would have done. I am very satisfied with the work that is taking place. Let the government work as it always does. Then we will talk about the Jubilee and Governance. Having a government that works well that is a friend of Rome is a great resource: I am very happy to have a very close collaboration with President Draghi ".