The prosecutor of Rome after the clashes of 9 October with the devastation of the CGIL headquarters: "In the site the exaltation of violence" 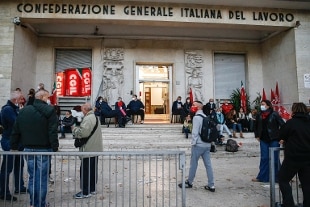 19 October 2021 Following the clashes of 9 October, the investigating judge validated the seizure of the Forza Nuova website.

According to the judge for the preliminary investigations, in the communiqué "Altro che Forza Nuova", published on the Forza Nuova website the day after the assault on the CGIL, the search for "consensus regarding the violent events that had just occurred was manifested, and the risk of commission of further crimes of the same kind ". The portal also allegedly made public statements in a case while the violent events were still ongoing.

In this line of investigation, four people under investigation for instigation to commit a crime aggravated by the use of IT tools: Giuseppe Provenzale, Luca Catellini, Davide Cirillo and Stefano Sajia, that is, the signatories of the statement of 10 October, online the day after the assault on the union headquarters.