What is the prospect of the battle between humans and the new crown? US media: The virus may evolve like this

China News Service, October 18th. According to the New York Times Chinese website, when the new crown virus appeared, many scientists did not expect it to spread indiscriminately around the world. So far, more than 237 million people worldwide have been infected with this virus, 4.8 million people have died, and 700,000 people have died in the United States alone.   Our relationship with the ne 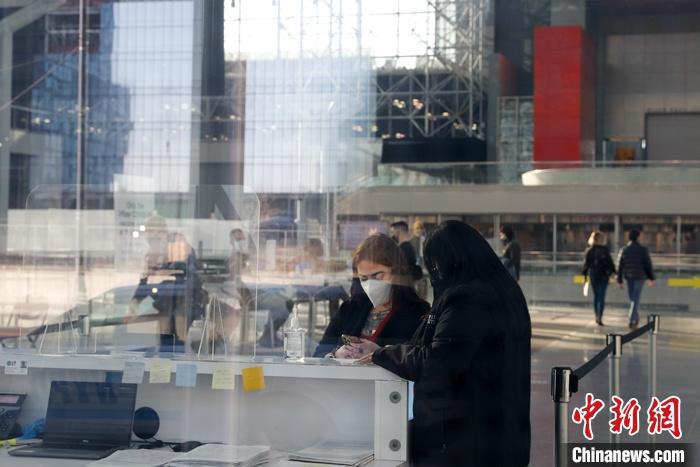 China News Service, October 18th. According to the New York Times Chinese website, when the new crown virus appeared, many scientists did not expect it to spread indiscriminately around the world.

Our relationship with the new coronavirus is still in its infancy.

Scientists say that we may not be able to completely eliminate this virus, and it is difficult to predict the development of the next few years or even decades.

But the legacy of past epidemics and some basic biological principles provide clues to where we might be headed.

Data map: People in New York, the United States registered for the new crown vaccine at the Javits Center.

Viruses are replicators, hijacking our cells to replicate their genomes.

Sometimes they make some small mistakes during the replication process, and most of the time these mistakes are not good for the virus.

But occasionally, the virus wins the genetic lottery: a mutation that brings advantages.

This more suitable version of the virus won the competition, leading to new variants.

"Compared with January 2020, the ability of this virus to spread from person to person has increased," said Jesse Bloom, a virus evolution expert at the Fred Hutchinson Cancer Research Center in Seattle.

"This is because the virus has acquired various mutations."

But scientists do not believe that this process will continue forever.

Based on the inherent characteristics of a particular virus, there may be some basic biological limitations on its infectivity.

It is not entirely clear what are the factors limiting the spread, but at least, the new crown virus cannot replicate quickly indefinitely, nor can it spread indefinitely over long distances.

Bloom said: "I can't say whether delta mutation has reached a stable period, or whether there will be further development before it reaches a stable period. But I do think that this stable period exists."

In addition, some variants have gained the ability to evade certain antibodies from us.

Antibodies can prevent viruses from entering our cells. They are designed to adhere to specific molecules on the surface of the virus and clasp them like puzzle pieces.

But genetic mutations in the virus can change the shape of these junctions.

"If you change this shape, the antibody won't work," said Marion Pepper, an immunologist at the University of Washington School of Medicine.

But as more and more people acquire antibodies against the virus, it will become more advantageous to enable the virus to avoid mutations in these antibodies.

Experts say the good news is that there are many different kinds of antibodies, and a variant with some new mutations is unlikely to escape all antibodies.

"The immune system has also evolved to have many ways to fight the evolution of the virus," Pepper said.

For example, certain T cells can destroy virus-infected cells and help reduce the severity of the disease.

Researchers have found that our T cells can recognize at least 30 to 40 different new coronavirus fragments when combined.

So far, studies have shown that for the new coronavirus, our antibody, T cell and B cell responses are all working as expected.

Scientists say whether the virus will become more virulent—that is, whether it will cause more serious diseases—is the most difficult to predict.

Unlike transmission or immune evasion, toxicity has no inherent evolutionary advantage.

"Viruses are not interested in killing us," said Princeton University evolutionary biologist Jessica Metcalf (Jessica Metcalf). "Virus is only important for viruses if they are useful for transmission."

People who are hospitalized are less likely to spread the virus than those who walk around with a runny nose, so some people believe that the new virus will become milder over time.

Whether the toxicity of the new crown will change in the long-term, it is still unclear.

There will definitely be a trade-off between toxicity and transmission; mutations that make people sick too severely and too quickly may not spread far.

But this virus has spread before people become seriously ill.

As long as this remains the same, the virus can become more toxic without sacrificing transmissibility.

In addition, what makes a virus more contagious—replicating faster or more tightly binding to our cells—may also make it more toxic.

In fact, some evidence suggests that delta is more likely to lead to hospitalization than other variants.

Andrew Read, an evolutionary microbiologist at Penn State University, said, "In good circumstances, I am optimistic that the severity of the disease will decrease over time. Because it is clear that people are being Isolation does affect transmission. In bad circumstances, I am worried that things will go in the opposite direction."

Data map: May 6, 2021 local time, New Delhi, India, a patient with new coronary pneumonia in the ICU ward of the Holy Family Hospital.

Although there are still many possibilities in the future, it is certain that the new crown virus will not stop evolving, and the "arms race" between the virus and us has just begun.

We lost the first few rounds by letting the virus spread arbitrarily, but we still have powerful weapons to put into battle.

The most notable is the highly effective vaccine developed at a record speed.

Even the first-generation vaccines can provide effective protection against diseases, and there is still a lot of room for improvement. They can be adjusted by adjusting the dose and timing of inoculation, adapting them to new mutations, or developing new methods, such as may be better to prevent Spread the nasal spray.

At the same time, as the number of completely vulnerable hosts decreases and the spread slows down, the chance of virus mutation will decrease.

A recent paper (not yet reviewed by experts) pointed out that rising vaccination rates may already be suppressing new mutations.

And as the adaptability of viruses to humans increases, the rate of evolution may also slow down.

Scientists predict that, eventually, as the evolution of the virus slows, our immune system will catch up, and we will reach an unstable equilibrium with the virus.

We will never destroy it, but it will burn slowly instead of turning into a raging fire.

What exactly this balance point looks like—how severe the spread will be, and how many diseases it will cause—is uncertain.

Some scientists predict that this virus will eventually, like the flu, still cause serious illness and death, especially during seasonal peaks.

Others are more optimistic.

"I guess that one day it will become another cause of the common cold," said Jennie Lavine, an infectious disease researcher at Emory University who studies this possibility.

Of course, scientists say there are many uncertainties, including how long it will take to reach equilibrium.

As the number of infections in the United States begins to decline again, there is a renewed hope that the worst period of the epidemic has passed.

But most parts of the world have not yet been vaccinated, and this virus has proven its ability to surprise us.

"We should be cautious and humble when predicting what it will do in the future," said Shane Crotty, a virologist at the La Jolla Institute for Immunology.