Two are wanted in custody for the shooting in Råbergstorp

22.32 on Friday night, a police patrol perceived something that sounded like a shooting in Råbergstorp in Eskilstuna. 12 minutes later, two people could be arrested in the Muntell area. Now the detainees are wanted by prosecutors. 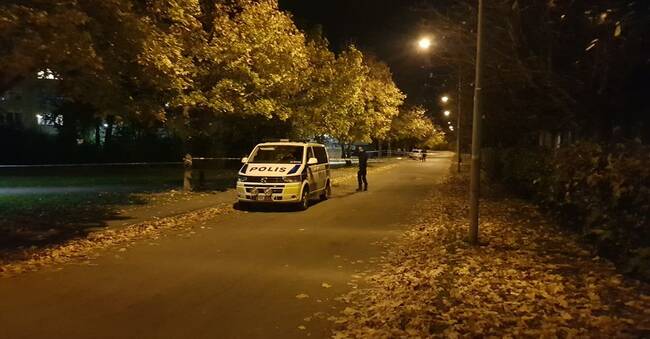 During Thursday last week, a man was shot near several preschools and a school in Fröslunda.

In that case, there is no suspected perpetrator.

After the shootings, the police increased their presence in the area.

Both to increase security in the district, but also for the public to be able to tip the police.

Let us decide what is important, says Elenore Ingårda, group manager for the police department for serious crimes.

The police presence in the area also proved to be valuable from another aspect.

A day later, at 10.30 pm on Friday evening, several calls were received by the police about a shooting in nearby Råbergstorp.

But even a police patrol heard the shots, which meant that the police were quickly on the scene and were able to start the hunt for two suspected perpetrators in their 25s.

Proud of the police

The suspects traveled on a moped and were picked up by the police in the Muntell area.

They were arrested and in connection with the beating, they received minor injuries - one received an injury to the head, the other to the leg.

They have been arrested by prosecutors and are reasonably suspected of attempted murder and aggravated weapon crime.

On Monday, the detainees were requested and on Tuesday, an arrest hearing is planned.

After the incident in Råbergstorp, the police have secured tracks at the site.

Coupling is being investigated

- I do not want to go into what it is about for seizures that have been made, says Elenore Ingårda.

At present, the police see no obvious connection between the two shootings, although it is something that is being investigated.

In connection with the shooting in Råbergstorp, the house facade and windows must have been damaged, but the police do not know if any specific person can be counted as a victim.

- We have no injured person that we know, then those who live there become plaintiffs, says Elenore Ingårda.