The plans for a wind farm, with 250 meter high wind turbines, in the area around Uråsa have led to massive protests in the past year, something that SVT has told several times about. And last week, a message came from the county administrative board in Kalmar - the project is rejected. But in reality, the issue was decided already in May when Tingsryd municipality vetoed it. 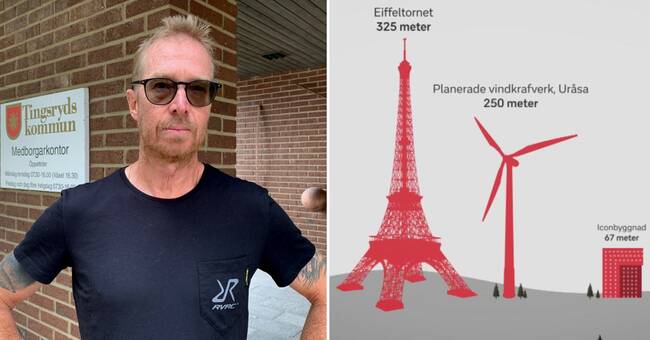 The decision taken by the environmental assessment delegation at the County Administrative Board in Kalmar County last week is short and concise.

The assessment is that it is not possible to give the company BayWare Scandinavia AB a permit because the municipality of Tingsryd has not approved the application according to ch.

Section 4 of the Environmental Code.

Without the municipality's approval, there is no reason to look at other issues regarding consultation, the environmental impact statement or the compatibility of the applied activity with the Environmental Code in general, the county administrative board writes in its decision.

The matter has thus in reality been decided since May 2020, when the municipal council in Tingsryd decided to veto the establishment.

But despite that, the process at the county administrative board has rolled on until now.

- We did it early to facilitate and so that the review authority would not have to invest resources in this, but it turned out that it did not work that way.

We tried to be a little ahead of our time but it did not work and I hope it will change in the future, says Mikael Jeansson (S), chairman of the municipal board in Tingsryd.

Criticism from residents and municipalities

The establishment process and the application have received criticism, both from the residents of Urås and from the municipalities of Växjö and Tingsryd, among other things because the data has been insufficient, and because the communication and collaboration with local residents has been late and poor.

A wind turbine that ends up in the middle of a pine tree - no honest picture, according to Urås resident Johan Elm.

See more photos in the clip.