The school attack in Eslöv - minute by minute

SVT Nyheter Skåne has taken part in the police's preliminary investigation into the school attack in Eslöv on 19 August. The 15-year-old suspected perpetrator broadcast the attack live using a mobile phone mounted on the helmet. Here you can follow the 25 minute and 36 second long clip. 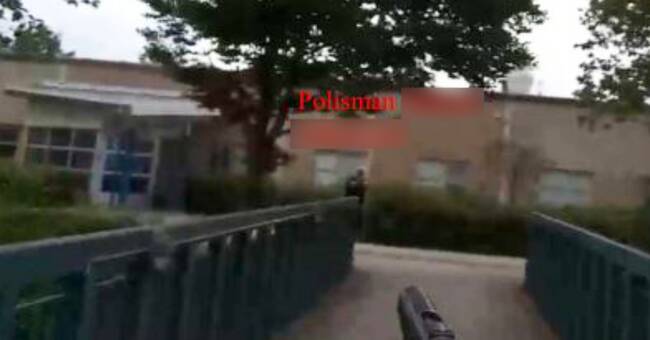 The perpetrator is standing at the sports field next to Källebergsskolan.

He turns on music and walks back and forth in front of the cell phone that is placed on the ground.

He wears dark trousers, a safety vest, a dark jacket with small Swedish flags attached to the sleeves, a ski mask and mittens with a skeletal pattern on.

The perpetrator picks up the camera and attaches it to a helmet he is wearing.

The picture shows a knife of a longer model that the perpetrator is holding. He is moving towards the school.

While walking, the perpetrator waves the knife so that it is visible in the picture.

In his left hand he has a pistol.

He turns around several times and says "ah, scheisse".

The perpetrator enters the school.

He enters the cafeteria where he passes some students and approaches a teacher.

The teacher says "you are fully dressed here", and shortly afterwards he starts screaming.

The teacher lies on the floor and cries for help.

He holds his stomach and shouts "oh".

Staff and students are on their way into the cafeteria.

One student shouts "what's going on?", And another shouts "I'm calling the fucking police".

A classroom door closes and the perpetrator starts kicking the door.

Another student says that he should call the police, to which the perpetrator replies "drive on, come on!".

The perpetrator continues into the school.

There he meets a teacher whom he asks to stick.

Then he says "She is a good teacher".

The injured teacher remains on the ground.

He says "call the ambulance" to some colleagues sitting next to him.

The perpetrator laughs and walks around the cafeteria.

The perpetrator says "Damn how long it takes for the police to come".

He throws things down on the floor and then triggers the fire alarm.

The perpetrator points his weapons at students who have jumped out of classroom windows.

Photo: From the police preliminary investigation

The perpetrator leaves the school.

He walks a few meters away, but turns around when he notices that students have started jumping out of classroom windows.

Both pistol and knife are aimed at the students, at the same time as he asks them to stab.

The police shout "lie down!"

repeatedly, but the perpetrator continues forward.

Photo: From the police preliminary investigation

A policeman appears in the picture.

The police repeatedly order the perpetrator to lie down, but he continues to walk.

The police shout "lie down, I shoot" and fire two warning shots.

Sirens are heard in the background and more police officers arrive at the scene.

The perpetrator is pushed to the ground by police.

They order him to lie still.

He is identified and handcuffed.

The image becomes gray and noisy.